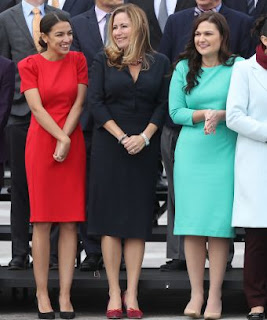 Some of the diverse and most interesting members of the freshman class of Congress are comprised of Women of varying ethnicities, races, sexuality and ages.  In other words: Pretty Damn Amazing.  They of course have already been labeled radical for their ideas about free health care, free college, abolishing ICE and moving America towards renewable energy.  Yes radical, like cupcakes made of sweet potato.  Which for the record are delish!

Meanwhile the Republicans found a woman who would sit in the front row of a lynching. Okay then not radical in the least.

Only one GOP Candidate I have any respect for and that was the newly elected Congressman Crenshaw who was mocked on Saturday Night Live by the very confused and disturbed Pete Davidson.  In a show of both good faith and humor he came on and was funny, charming, and real.  It brought tears to my eyes which for a comedy show is a rare if never occasion but in his presence I found comfort and relief that there can be rational and true patriots who  serve our country in every sense of the word and unless he turns into a right wing crackpot then he will have my support.  Now that is very radical given I live in the reddest state north of the Mississippi - Tennessee.

I have said repeatedly unless this place starts to attract educated individuals who have a sense of activism and engagement this state will continue to elect Plumbers and former fashion consultants to elected office.    The news of the supposed 5K employees coming for Amazon again is not happening tomorrow and will be spread over 5 years.  I have already said that such bullshit is just that and the promise of 1000 jobs via Alliance Bernstein and 600 for EY means nothing as these are financial service jobs that are notoriously right wing and are here to retain the status quo as the taxes and costs are low - for them.  Amazon is no different but the reality is that the tech sector here earns an average of 65K annually with the average income for the average 45K so bitch please we would all be on board that ship tomorrow.  They are in arrears here already planning a rise in housing costs, the lack of tech talent and how to develop it and of course nothing about the crush on the infrastructure including sidewalks, traffic and transit to resolve the endless gridlock for those already here not earning 150K for any elite business.

Well we could go into public service, oh wait we have few  minorities serving in Congress but even fewer working within it. Shocking, I know, not really. I live here and frequently say that I am living in a time warp that began and ended in 1950.    Mar-a-Lago may be less white as the staff are largely immigrants.    Again race is not the starting nor end point here but it is a point and the reality is that this is like a co-dependent resignation that this is what it is and women and the coloreds are here and we just have to get along, go to our own corners and let the men folk figure it out.  How radical. Oh wait the radicals left the room along time ago.

Tennessee's congressional delegation ranks among the worst in the country for diversity among its top staff members, according to a study released Thursday.

The study was conducted by the Joint Center for Political and Economic Studies, a Washington, D.C.-based nonprofit focused on improving civic engagement among African-Americans.

It found that of the 28 staffers who serve as full committee staff directors, personal office chiefs of staff, legislative directors and communications directors of Tennessee's U.S. House and U.S. Senate members, all were white.

That's in contrast with 25 percent of Tennessee's population identifying as people of color.

"Tennessee has absolutely no top staff of color," said Spencer Overton, president of the Joint Center. "That is unique among these reports. In all these reports, there are some top staffers (of color). They're under-represented, but there are a few. In Tennessee, the number is just absent."
A 'particularly striking' lack of diversity

The organization released reports outlining the lack of racial diversity among top staff members in the Mississippi, Virginia, Maryland, Pennsylvania and Delaware congressional delegations, in addition to Tennessee's. The numbers are based on employment as of June 1 and look only at the top D.C.-based positions.

More than three-quarters for U.S. Rep. Steve Cohen's district is non-white, but Cohen lacks any people of color among his top staffers, according to a report from the Joint Center for Political and Economic Studies.

The Tennessee report specifically highlighted U.S. House District 9, where 75.7 percent of residents are non-white. The House district, which belongs to U.S. Rep. Steve Cohen, D-Memphis, has the sixth highest percentage of residents of color with no top staff members being people of color.

In 2016, African-Americans accounted for 82 percent of the Democratic Party turnout in District 9.

While Cohen's current top staff in D.C. are all white, he has previously had people of color in those roles.

"We have and we continue to make every effort to make sure we have a diverse office," said Marilyn Dillihay, Cohen's chief of staff.

"Which means they actually have more staff and they oversee many more staff positions than other members of Congress who are not chairs of committees," Bell said. "That's more opportunities to actually hire people of color. More spots."

The organization is calling on congressional members and their staffs to develop office diversity plans, track and annually disclose office demographic data, recruit and pay diverse interns from Tennessee and build a diverse pipeline of mid-level staff to eventually fill top positions.

The Joint Center also suggests that members adopt a version of the NFL's "Rooney Rule," which could require an office interview at least one person of color for each vacant senior position.