I found it interesting today that as Governor Brown of California signed the right to die legislation today, he also vetoed several bills and his reasoning was most prescient. 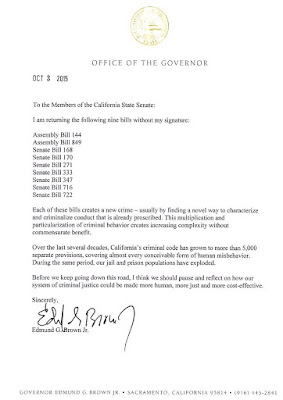 As California has one of the largest inmate populations in the Country this will only affect a minor few. The real bulk of inmates are in State facilities often run by private industry with an actual occupation quota, meaning that the states will pay them regardless if they are unable to meet a minimum capacity count. America, the free market is great.

The Marshall Project explains the back story and the reality of how this "release" came about.

And now the issue of employment, housing and of course probation will once again raise its ugly head as these inmates, many of them I suspect quite old will need assistance to transition back into the community. What is the plan for that? Free market baby! Free at a cost.

WASHINGTON — The Justice Department is preparing to release roughly 6,000 inmates from federal prison as part of an effort to ease overcrowding and roll back the harsh penalties given to nonviolent drug dealers in the 1980s and ’90s, according to federal law enforcement officials.

The release is scheduled to occur from Oct. 30 to Nov. 2, and will be one of the largest one-time discharges of inmates from federal prisons in American history, said the officials, who spoke on the condition of anonymity because they did not want to be identified discussing matters that had not been publicly announced by the Justice Department.

The Bureau of Prisons is arranging for many of the inmates to initially move into halfway houses, one official said.

In April, the United States Sentencing Commission created guidelines that reduced the penalties for many nonviolent drug crimes and made some of those changes retroactive. Officials said at the time that the move applied to at least 50,000 federal inmates sentenced under the previous guidelines.

The new guidelines were issued amid increasing support for an overhaul of sentencing. The United States has a quarter of the world’s prison population and both Republicans and Democrats agree that prison spending, which accounts for a third of the Justice Department’s budget, needs to be reduced. News of the prison release was first reported by The Washington Post.

On Capitol Hill, lawmakers are considering other ways to scale back the numbers of people who are facing lengthy stays in federal prison because of nonviolent drug crimes.

A bipartisan group of powerful senators last week proposed a broad overhaul of the existing system for imposing mandatory minimum sentences, urged on by President Obama and a coalition of activist groups that ranged from the far right to the far left.

The changes would be retroactive if the legislation is enacted, and lawmakers estimated that up to 6,500 prisoners — many of them charged with offenses related to crack cocaine — could qualify for resentencing under the changes.
Posted by Unknown at 8:37:00 PM