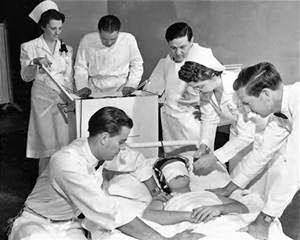 And on this news I have nothing more to add frankly as if I said "shocking, I know" it would mean that someone will come to my door to provide electro shock therapy in the same manner another famous Seattleite was, Frances Farmer.  That turned out just about as well.


SEDRO-WOOLLEY, Wash. (AP) — For two weeks, a 13-year-old boy diagnosed with serious mental health issues sat in an emergency room bed at United General Hospital. After countless daily phone calls to facilities across the state, the hospital wasn't sure what else to do other than keep the boy there and hope a placement opened.


An involuntary treatment hearing was held Thursday. With no one qualified to testify about the child's condition, a court commissioner ordered the boy be released without treatment.

"The mental health system has failed this young boy," said attorney Dennis Scott of Anacortes, who argued for the boy's release.

Testimony indicated the boy suffers from attention deficit hyperactivity disorder and post-traumatic stress disorder. At the hearing, the boy's mother tearfully expressed her frustration to get her son help.

Shortly after the hearing, Scott learned a bed had been found for his client.

Scott routinely represents patients during these hearings and said this case is far too common and illustrates the poor job the state has done to take care of its mentally ill citizens. This case was particularly egregious, Scott said. The child was acting out aggressively and was in a crisis state. But after being hospitalized for two weeks in United General's ER, he received no mental health treatment and the state found no placement for him.

"I get outraged because, quite frankly, that shouldn't happen," Scott said. "This is by far the worst I've seen."

Jim Shreffler, a mental health expert with regional care provider Compass Health, said there are only four facilities in the entire state that have special resources for juveniles, each with roughly 15 beds. And he said those resources have continued to shrink while demand grows.

United General officials said the emergency room isn't set up to handle mental-health cases or long-term care but has few options when treatment beds can't be found for the mentally ill. And worse than costing thousands of dollars, officials said highly trained resources are tied up.

"It is an outrageous problem," said nursing director Carsi Padrnos.

Kathy Spears, a spokeswoman for the Department of Social and Health Services, said she was not able to comment on specific cases, but said mental health treatment is a struggle in some areas of the state.

A 2014 report by the American College of Emergency Physicians bears that out. The report ranked Washington state 47th in the nation for the number of psychiatric care beds available, with only 8.3 per 100,000 people.
Posted by Unknown at 3:16:00 PM