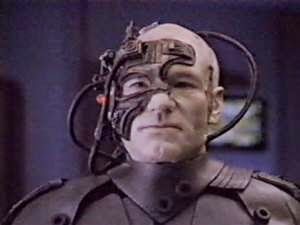 And if Big Pharma and their pusher the family Doctor hasn't hooked you yet well just wait.  From the womb to the grave they will get you.

Big Pharma they are like the Borg from Star Trek the Next Generation, you will be addicted...whoops I mean assimilated.

“I think our experiment failed,” the young graduate student told me, referring to our attempt to take her off the antidepressant she’d been on for seven years. She was back in my campus office after a difficult summer break, and as she talked about feeling unsettled and upset, I wondered about the broader experiment playing out on college campuses across the country.

Antidepressants are an excellent treatment for depression and anxiety. I’ve seen them improve — and sometimes save — many young lives. But a growing number of young adults are taking psychiatric medicines for longer and longer periods, at the very age when they are also consolidating their identities, making plans for the future and navigating adult relationships.

Are we using good scientific evidence to make decisions about keeping these young people on antidepressants? Or are we inadvertently teaching future generations to view themselves as too fragile to cope with the adversity that life invariably brings?

My patient had started medication as a college freshman, after she’d become depressed and spent much of her time in bed. She was forced to take a medical leave but improved quickly, returned to school and graduated. She married soon after and worked for a few years, feeling well all the while.

Professional guidelines recommend six to nine months of medicine for first episodes of depression. But my patient had never been advised to stop taking it. She reluctantly agreed to my recommendation to taper off her antidepressant.

For a couple of months she didn’t feel any different, except, she said, things “moved” her more than before. It wasn’t that she was sad more frequently. Rather, she was having emotional reactions, including tearfulness, more readily. This didn’t seem problematic to either of us.

When I recommend to my patients that they come off antidepressants, I encourage them to choose a relatively transition-free time in their lives, so that we don’t mistake what might be a normal reaction to a stressful situation for symptoms of recurrent depression. But because I work with university students, it’s close to impossible to find such a time.

My patient had moved away from her husband to start graduate school, since his job kept him in another state. She’d expected the temporary separation to be hard but navigated it smoothly, focusing on school, with occasional visits.

In the summer, she moved in with him and was surprised to feel emotionally “muted.” It was nothing like her college depression, but she worried. She’d counted on the reunion being easy.

As she looked back, she acknowledged that moving again, leaving behind new school friends and routines, and not having the structure of school or work to fill her time might have challenged anyone. She noticed small ways in which she and her husband were growing in different directions, and this alarmed her. She wanted to resume medication, thinking that maybe the summer would have gone better with an antidepressant.

Major depression in adults is often recurrent: half of people with first episodes will have a second episode. The current standard of care is to recommend medicine indefinitely after three or more recurrences, or even after a second episode if certain other risk factors are present.

However, these recommendations are based on evidence gathered in clinical trials of moderate-to-severe depression in adults older than the students I treat. Many studies were short-term; few followed patients for longer than two years. Some were funded by the pharmaceutical industry, which has a financial stake in keeping people on medicine indefinitely.

Children and adolescents increasingly take antidepressants. In 2009, a large trial called the Treatment for Adolescents With Depression Study showed that those who took an antidepressant in conjunction with therapy for nine months were much less depressed, and less suicidal, in the year after stopping treatment than those without treatment — so clearly treatment is critical. But for how long? And is medicine on its own, without therapy, sufficient?

More students arrive on campus already on antidepressants. From 1994 to 2006, the percentage of students treated at college counseling centers who were using antidepressants nearly tripled, from 9 percent to over 23 percent. In part this reflects the introduction of S.S.R.I. antidepressants, a new class of drugs thought to be safer and have fewer side effects than their predecessors.

At the same time, direct-to-consumer advertising of prescription drugs also became commonplace. Some of this very helpfully reduces stigma, allowing people who are suffering from depression to get much-needed relief. But it also creates demand where genuine need may be less clear.

College deans have written about incoming freshman being “crispies” or “teacups”: the crispies so burned out by the pressures of high school that they get to college unable to engage in the work, and the teacups so fragile or overprotected in their formative years that they fall apart at the first stress they encounter.

In my experience, the attempt to stop antidepressants in college students goes well less often than the prevalence of depression suggests it should. Some students probably do have chronic mental health issues that require long-term treatment. But others are also drinking alcohol heavily, or using drugs like marijuana or their roommate’s Adderall, or suffering from other problems, such as eating disorders, that they’d rather not confront.

Others have just experienced loss, or rejection, and medicine may have become a panacea to which they turn at the first signs of unhappiness. Some resume antidepressant use on their own, and by the time they return to see me it’s impossible to assess whether they in fact had a recurrence of their depression; we’re often then committed to another course of treatment. We now know that the young adult brain is still changing and developing much more than previously assumed. But we still lack a clear understanding of how psychiatric medicines might affect this brain development.

My patient and I reviewed her symptoms, and I assessed her for serious risks, such as thoughts of suicide. This is a critical part of psychiatric care, and often where the psychiatric encounter ends — with a prescription. That may be completely appropriate when driven by clinical judgment. But sometimes it’s a matter of expediency. The doctor doesn’t have the time to go into all the other treatment options, or the student lacks the time or motivation to pursue therapy, or stop drinking, or work on self-care.

Insurance often doesn’t cover much therapy; medicine is cheaper in the short-term. My patient was not in another major depressive episode, but she didn’t want to wait “until it got to that point.”

We discussed the milder and more chronic form of depression known as dysthymia. Though she hadn’t had symptoms long enough to warrant that diagnosis, the most conservative approach was still to just resume the medicine.

But my patient’s symptoms were only one part of a compelling life story: that of a young woman trying to balance personal aspirations with intimacy. She was discounting her emotional reactions to difficult life events. These struggles might be the very moments that precipitate personal growth.

Emerging adults are at such a critical juncture in their lives; it seemed important for my patient to have a chance to explore her relationship with her husband and her expectations about work and love and herself. She agreed, opting to try therapy first and defer medication.

We walk a thinning line between diagnosing illness and teaching our youth to view any emotional upset as pathological. We need a greater focus on building resilience in emerging adults. We need more scientific studies — spanning years, not months — on the risks and benefits of maintenance treatment in emerging adults. Maybe someday, treating people like this young graduate student, I won’t have to feel like we’re conducting an experiment of one.
Posted by Unknown at 7:16:00 AM