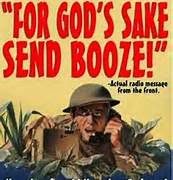 The War on Drugs has many casualties and not the ones you think. The tragic victim portrayed by the media as one harmed by some perpetrator or family member lost to the power of the drug and the endless cycle of addiction or in fact the actual addict/felon or just an ordinary user of what used to be called "recreational" drugs. No means rea in that victim. The 15 minutes of the death of Phillip Seymour Hoffman, a respected atypical type of addict is a good example.  He harmed only himself. We don't like to think of "them" as white educated thespians of acclaim. Poor black whores and pimps with needles or toothless meth heads are more the archetype.

Ever read any books about anyone other than rock stars? The power of drugs and addiction run all kinds.

And let us not forget booze. Fun when its laughing at Lindsay Lohan or recalling the drunks of Taylor and Burton but in America land of the happy hour it loses its happy pretty quick when you suddenly see that in fact once labeled a drunk you are now a felon just like that crack whore you stepped over on the way to the bar. Booze - That is the second tier level on the war on drugs. With St. Pats this Monday I am sure there was much erin go bragh over the weekend and with it ramped up DUI patrols and the arrests which accompany it. This is one that the media love to trump when any accident under the influence kills someone and immediately all drivers are suspect be they one glass of wine or 100, all drivers are drunks and dangerous. And of course all accidents that occur, kill or injure are ALWAYS drink or drug related, right?

I live in Seattle and I live in a place of fear, fear of the police. I laugh when everyone who moves here thinks of this as liberal haven only to find out it is a dump of mentally ill and poor permeating the streets and in turn a Police department so corrupt and so ineffectual at reform that even a 41 Million dollar Department of Justice investigation and fine has done nothing to change the balance in this equation.

Today I found this website utterly devoted to the corruption and ineffectiveness of the Seattle Police and it is not even current with regards to the level of incompetency that defines this City's idiocy. My favorite fraud is this week the shitbag University of Washington Hospital was rated by the bought and paid for News and World report as a number one medical school. Shame they didn't meet this dude? I bet he isn't wearing orange however?

But then I found this another laugh with this bit of news: Doctor found himself in restraints as well. And what I love is that he is a "paid for expert" you know the kind that testimony that is bought and paid by the biggest check writer. Only this time his bullshit testimony was corrupt and actually killed people so add murderer to liar. But hey when the same school a few years ago found themselves under federal investigation for Medicare fraud they did what they all do, fire the whistle blower. So tell me what makes this hospital so great. It seems largely a reflection of the hyperbole about the school and its medical arm utter bullshit. If it was so great why did its Emergency Trauma Director, Eillen Whalen, abruptly quit. I never did find out if they ever did finally get training in the ER added to the curriculum as they were about to lose accreditation due to that "oversight." Someone actually inform her how incompetent Harborview is?

And of course we have the pleasure of having America's number one richest man in the world, Bill Gates live here. And of course the fraud that defines his foundation. One perusal of the Rolling Stone interview reveals that much like this City you need to turn over the pretty rocks to see the slime beneath it.

Seattle the city of slime under the rock of Rainier.

And as we spend millions to rid our culture of the scum, the druggies, the drunks, the costs are not worth it. But hey we like to think we win our wars. No we lose but the bullshit associations, from the Lawyers, to private industry to the fake non profits trumping bad junk science as fact win big and more importantly dish the dish to a media that is an ever increasing tail that is wagged by the dog that the dog whistle followers lap up like Alpo.

We have a Country under fire. We have to start fighting it and pushing it back.

The Futility and Costs of the “War on Drunk Driving”
Posted by Lawrence Taylor on March 16th, 2014

For the past couple of decades we have seen increasingly severe punishment for misdemeanor drunk driving offenses, often exceeding those imposed for serious felonies. Spurred on by MADD's "War on Drunk Driving", this never-ending flood of politically-popular laws has continued to blindly accept the idea that imposing harsher sentences will eventually eradicate DUI-caused traffic fatalities. With each new law, MADD issues press releases trumpeting their latest achievement with promises of an end to the "carnage on the highways" — along with solicitations for contributions to their over $50 million annual revenue. And yet it continues…along with the collateral costs to our Constitution (see The DUI Exception to the Constitution).

Albert Einstein once defined insanity as "Doing the same thing over and over again and expecting different results". Maybe it's time for a change….

I have not dealt with 1000s of DUI clients over the years without drawing certain conclusions:


1. The system, clearly, does not work: despite unfair laws, constitutional violations and increasingly harsh penalties, the problem remainsâ€¦and people continue to die on the highways.

2. Playing games with statistics, as MADD and the government are so fond of doing, only obscures the problem.


The problem is the person who severely abuses alcohol and chooses to drive. You can call him an "alcoholic", but it has been my experience in dealing with those 1000s of clients that there are different kinds of "alcoholics" and that using a simple label is no answer (we do love to put things in neat categories).

Statistics repeatedly show that the vastly disproportionate majority of alcohol-caused injuries and deaths are caused by a few "problem drinkers" (for want of a better term). Thus, the first objective in any solution is to identify these individuals. In my experience, they can usually be identified by a combination of factors:

2. This is probably not the first DUI — and prior incidents are likely to be relatively recent.

3. There is a genetic flag: the individual is likely to have one or two "alcoholic" parents.


All right, we've identified some markers for who the problem is , but what do we do with them? To begin, let's understand what we don't do: we don't hit them with stiff jail sentences. If we do, we simply remove the person from society for a few days or months — and on the day he gets out, he gets in his car and drives directly to a bar. What has been accomplished? Is society being protected — or are we simply punishing people for drinking too much?

Since the punishment model clearly doesn't work for the problem drinker, we must consider the other criminal justice models — isolation, deterrence and rehabilitation.


1. Isolation. Yes, we can put the problem drinker in jail for a few months or even a few years, and we are safe from him for that period. But can we really afford to house tens of thousands more inmates? For how long? And what happens when they get out? For that matter, given the evidence, aren't we punishing them for a genetic condition?

2. Deterrence. How do you deter an "alcoholic"?

3. Rehabilitation. Once the favored approach in the criminal justice system, rehabilitation fell into widespread disfavor many years ago. Yet, this would appear to be the only logical approach with problem drinkers.


Ok, but what about the driver who is not a problem drinker but who is simply impaired from drinking too much? Answer: Treat him like any other misdemeanant. Statistically, we know he is unlikely to cause serious injury or death, but there is undeniably some risk there. Can this individual be deterred from such future conduct? Unlike with the "alcoholics", statistics show he can. Thus, it may be fair and productive to impose a fine on the typical first-offender, perhaps even suspend his driver's license for a short period; if a high blood-alcohol level is involved, say .20%, the punishment may include a 2-day jail term. But certainly not the punishments so destructive to families and careers that are now being administered to all caught up in the dragnet.

While we're at it, a refreshing approach — and a healthy one for society — would be to reinstate constitutional rights in DUI cases: due process, presumptions of guilt, timely right to counsel, protectiona against double jeopardy, the 5th Amendment right against self-incrimination, the right to confront witnesses, 4th Amendment "sobriety checkpoint" violations, ad nauseum. (Again, see The DUI Exception to the Constitution.)

Does all of this finally solve the drunk driving problem? No: people will always drink and drive. But it will focus on the real threat — the truly dangerous driver — rather than on drinking and driving per se. And, in the process, reinstate the essential fairness and due process that has been slowly removed from the criminal justice system.
Posted by Unknown at 6:32:00 PM