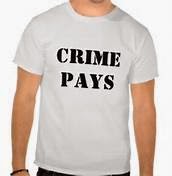 The business of law is in fact that - a buisness. It is about profit and margins and in turn more money for those in the business of the law.

From the beginning of law schools and their perpetual fraud by encouraging student's to enter a school, take on massive debt and find that the promise of work and in turn financial compensation parallel is tantamount to fraud. But they go unrepetenant and utterly on with the illusions and delusions of those who still buy the bullshit. And then we have the Graduates who did learn that lesson well and they are the Lawyers that run the country and the business that also run our country. That is the perk of the 1% and the benefit. Takes self management and conflict of interest to new heights.

Then we have the business of Jurisprudence. A business from the for profit jails, to the varying services that run adjacent to the jail system - electronic home monitoring, fake therapy and education, victim panels, interlock devices, and other excessive absurd requirements that cost the state little but the "felon" plenty. You pay and pay and pay again for your rights to be exploited under the law.

Commit the crime and in turn go into debt forever to remind yourself prison could have been worse. Its all the same as your credit and public information is now forever on the books. That is one prison you can never escape, it makes Alctraz lookk appealing.

As we look to the sudden move to change sentencing laws I wonder if any of this will stick or once again be buried by the numerous hands that have checks in them to keep the system as it is. Overburdened and over criminalized.

I passed a work crew today and they were great people who did really nothing to harm the greater good. I asked them and they were truly "crimes without intent" the concept of mens rea - an element of criminal responsibility, a guilty mind; a guilty or wrongful purpose; a criminal intent. Guilty knowledge and wilfulness. When you say it in Latin is sounds posh and of course more criminal.

But there is some perverse pleasure in seeing their own pay the price for the crimes on a greater bigger community.. and that does define mens rea.

Here is one of the white collars being escorted to the color of orange.

And while it addresses the prosecutorial strategy I doubt in these cases the misconduct part will be a part of the process. Remember even in white collar crime, there is a line which you do not cross and that is remember your own. Shame we cannot actually do the perp walk with those Prosectutors, Judges and Police that failed to serve Justice without bias but we can hope and we can actually try.

It does make you wonder if they will too be serving the community in vests and cleaning the streets. I think not.


Criminal charges filed by New York prosecutors against Steven H. Davis, former chairman of Dewey & LeBoeuf, describe actions that sound quite similar to the events that led to the collapse of Enron and WorldCom a decade ago. And, as with those earlier cases, the challenge for the government will be finding enough evidence to link the law firm’s head to accusations that accounting tricks were used to cover up a deteriorating financial position.

The 106-count indictment accuses Dewey & LeBoeuf’s leadership of mischaracterizing assets to deal with declining revenue that put it in danger of violating the terms of crushing bank debt taken on as part of a 2007 merger. Dewey eventually collapsed and filed bankruptcy in May 2012 amid accusations of mismanagement by Mr. Davis.

The other defendants are Stephen DiCarmine, the firm’s former executive director; Joel Sanders, the former chief financial officer; and Zachary Warren, a low-level employee who seems to have been included merely because of an email in which he wrote “Nice work dude” about one of the accounting maneuvers. Through their lawyers, all of the men have denied the charges.

The main charges against the individuals involve grand larceny and falsifying business records to deceive Dewey’s bank lenders and 13 insurance companies that bought $150 million in bonds the firm issued in 2010. The Securities and Exchange Commission also filed civil fraud charges against Mr. Davis, Mr. DiCarmine and Mr. Sanders, as well as two other members of the firm’s finance office. Curiously, the S.E.C. did not name Mr. Warren as a defendant.

Proving larceny under New York law requires showing that the defendant acted with specific intent to steal property with a value of over $1 million. That means the prosecution must show more than just recklessness, but an awareness that the accounting misstatements were designed to deprive the victims of their money.
The indictment recites a number of emails that can help build a case regarding what the defendants knew about the accounting tricks to show their intent to steal. And the New York prosecutors have secured guilty pleas from seven others in Dewey’s finance office, some of whom will testify for the government in the case.

As DealBook pointed out, the leaders at the firm seemed to have ignored the maxim to never put anything about questionable conduct in writing. Thus, the indictment highlights messages about finding “another clueless auditor for next year” and pushing an employee “to go way out on a limb right behind me if you know what I mean.”

Snippets from emails make for good headlines, but Mr. Davis does not appear to be as deeply involved in the financial maneuvers as others at the firm. That may let him offer an ignorance defense to undermine the government’s evidence of his intent to steal. His lawyer, Elkan Abramowitz, said Mr. Davis acted “in good faith in an effort to make the firm a success.”

In one email exchange, when informed on Dec. 30, 2008, that the firm was $50 million short of meeting a year-end covenant for its bank loan, Mr. Davis responded, “Ugh.” That is rather tame compared to what was probably going through his mind, but does not show much intent to engage in accounting shenanigans.

A few days later, he sought to have a client backdate a check for fees it owed to Dewey so that the money could be reported in 2008, helping to overcome the revenue shortfall. That is certainly questionable conduct, but companies often scramble to get paid at the end of the year so they can report good numbers. Whether that rises to the level of grand larceny is an open question.

An email sent by Mr. Sanders in November 2009 to Mr. Davis and Mr. DiCarmine talked about continuing financial problems at the firm, and points out that there would not be enough cash for partner payments “since $25M is fake income.” Any time the word “fake” is used in a sentence there is a problem, but Mr. Davis is only a recipient of the email, not its author.

Proving intent from documents is never easy. A company’s top leader is always dealing with a number of different issues, and so showing that the person actually paid attention to any particular communication is difficult without having witnesses who can discuss what the defendant actually knew at the time.
The fact that Mr. Davis is a lawyer works against a claim of ignorance, but the charges revolve around financial issues, a subject about which most lawyers can plausibly claim a lack of knowledge.

Mr. Davis would not be the first person to defend himself against accounting fraud charges by asserting a lack of knowledge. Nearly 10 years ago, Bernard J. Ebbers, the former chief executive of WorldCom, told the jury that he was unaware of how the company shifted certain expenses that allowed it to mask declining revenue.
Of course, that defense didn’t work for him because the company’s chief financial officer, Scott D. Sullivan, testified about the chief executive’s involvement in the accounting chicanery. Mr. Ebbers was ultimately convicted and sentenced to 25 years in prison.

The prosecution of Mr. Ebbers highlights the importance of having trial testimony from a witness who dealt directly with the boss, rather than just relying on emails and claims that he must have known what was going on. The case against Mr. Davis may hinge on whether the prosecutors can persuade someone close to Mr. Davis – like Mr. DiCarmine or Mr. Sanders – to testify about his involvement in the accounting decisions Dewey made to cover up its financial problems.

Unlike many corporate prosecutions in which the company pays for the lawyers, Dewey’s bankruptcy means the defendants will be largely on their own when it comes to paying for their defense, as the firm’s insurance policy has been depleted. So don’t be surprised if we see a deal made with one of the other defendants in the case as the financial pressure builds to fight the charges