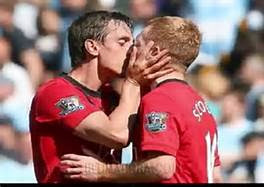 Not a sports person. But I have followed the "controversy" of this young all star football player Michael Sam who came out as gay.

My first thought was, "one day this will all be superfluous". And I recall my first 'outing' by Dave Kopay when I was in college. He came to the University I was enrolled in at the time (the late 1970s) and spoke to a very small group. He was warm funny and like all the Gay men I grew up around only athletic. That was different in my home as we were never a sports oriented family. Gay oriented however.

This young man's personal revelation and in turn his private business that has nothing to do with anything has been an interesting story to read for the fact that his personal narrative is one that could easily fit the classic stereotype of a black male who made it via sports other than music or jail. Isn't that all black men are good for?

And it is clear he overcame more than his sexuality to become the star athlete he is and it is clear that he has a great future ahead of him regardless of his role in what I call another form of Jim Crow.

I am currently reading another book about football and its role in destroying lives it could well rescue and there are those that do care and do want more than a fast running back, hard hitter or great kicker/thrower, but those are few and far between the zeroes that mark what is ostensibly the real value in the NFL.

Here are some articles about Mr. Sam and they are well worth the read.

Teammates Knew the Story before there was one

Here are many many links from just a week of stories in the New York Times about this life changing decision. And by life I am thinking that refers to the NFL and their livilihoods

Now for whatever reason Michael Sam is something that is actually being debated. A young man, star athlete and for all purposes until he said, hey I date dudes, was considered promising future member of an NFL team.

Yet I see or hear no debate over the endless parade of current and past athletes who have a litany of shame to add to their resume. Bringing new meaning to the concept of All Star.

We have the bullying case of the Dolphins still being investigated. Harrassment sounds quite mature and of course normal in business. I can see why being gay is a problem given the level of homophobic slurs levied. This articlediscusses the pattern of abuse Jonathan Martin was subjected to by his teammates.

And this article I read today made me physically ill. A rapist who has a history of rape.

The complaint alleges the controlled substances were morphine and zolpidem, which is sold under the brand name Ambien.

A call from The Associated Press seeking comment from Nandi Campbell, an attorney for Sharper, was not immediately returned.

Prosecutors said he met two women at a West Hollywood nightclub on Oct. 30, invited them to a party and stopped at his hotel room.

He is accused of giving a shot of alcohol to each of the women before they passed out. One woman told investigators she woke up naked hours later with Sharper sexually assaulting her. The other woman awoke and "interrupted his actions," according to the criminal complaint.

On Jan. 14, Sharper met two other women at the same nightclub and invited them to a party. On the way, he invited both to his room and offered them shots before they passed out, prosecutors said.

When they woke up early the next day, one woman believed she had been sexually assaulted, the complaint said. Both women left his hotel and sought medical treatment.

Prosecutors want his bail raised to $10 million because the Miami, Fla., resident faces similar investigations in Arizona, Nevada and Louisiana.

If convicted in the California case, he could face more than 30 years in state prison.

Sharper was selected All-Pro six times and chosen for the Pro Bowl five times. He played in two Super Bowls, one with the Packers as a rookie and a second with the Saints

We can add him with the Aaron Hernandez story who murdered one individual and perhaps another prior to this one. The investigation into this Hernandez individual is akin to Whitey Bulger at this rate.

But apparently a young man with no violent history of any kind, who has been an amazing teammate and player who likes to put his penis into a man, with no drugs and consensually is being evicerated, dished and gossiped about is tragic. But in the meantime players who rape, drug, and kill people and dogs (let's not forget that one) are considered a part of the team.

And there was hysteria here in Seattle when they wouldn't let the children have a day off of school to celebrate the Super Bowl. Well this dude played in two. Let's hope none of the Seahawks find themselves in similar circumstances, I am sure Hernandez or Slaughter weren't bad guys either, right?

Well to paraphrase a quote of Groucho Marx, "any team that would have them as a member I would not belong