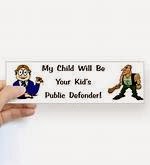 While I have been writing about the overwhelmed and over burdened system of what defines criminal justice, I have focused on the excessive over legislation of laws and in turn punishments that have contributed a court system busting at the seams with defendants being persecuted, whoops, I mean prosecuted for largely victimless crimes and in turn the over zealous nature to enforce said laws - from Prosecutors, to Judges and the Police.

All of them must share a role in what has become the State of the Union when it comes to a Country that has more individuals who have some mark of shame in our increasing need to felonize and penalize.

But one group is tragically connected without intent and design, the Public Defenders. There has been an overwhelming failure on this half century mark of the decision that gave us Gideon. And while it focused only on criminal it is also a failure as there is none for civil litigants who are increasingly ignored and in equally desperate need in that system that is also overwhelmed and utterly frustrating for those who also seek justice.

And the irony is that there is an overwhelming amount of Attorney's who cannot find full time work or are increasingly finding themselves outsourced and downsized with more legal firms closing and tightening belts in response to the economy that is or is not (depending on whom you speak to and what percent they belong) recovering at a distinctly different rate.

So you would think that there would be a move towards resolving both of those issues by re-examining ways to move people through the system affordably and appropriately and in turn getting those with the skills working on what they studied and trained to do. One say of course is re-examining the billing system and in turn removing the confusing barriers to have more people opportunity to avail themselves of proper counsel, access to court records, files and court itself. This is still a system that shuts down in its entirety for two to three hours a day which further lends to a race to justice to get all heads and bodies shoved through the doors and processed.

And all of this recovery has not come to the Municipal public facilities. This means schools, public service and more importantly the foundation of justice have gone underfunded. That is never more obvious when it comes to the Public Defender system. This article is from August that demonstrates how at peril it is due to its financial needs. And yesterday another article about how Public Defenders themselves are giving up as they are overwhelmed and simply overburdened to properly represent their ever increasing client load. No private rooms and copious motions filed on their client's behalf instead plea bargains and admissions of "guilt" vs innocence to get them in and out of the equivalent of a conveyor belt at a Sushi fast food joint.

In our country where we once believed innocent until proven guilty we are now guilty until maybe someone actually gives a shit and realizes that you were. That was the concept and idea of the public defender and they were put there to help those who could not afford the more experienced and in turn compensated legal eagles that defend and support those who are rarely charged with felonies and if are are quietly handled in adjacent rooms, where plea bargains are negotiated outside the observation of others and the supposed transparency the system demands, and in reality the humiliation of the public court system.

If you have never understood what transpires in a Court in your community - visit one. Circus comes to mind and it is full of clowns, those who work there, while the audience is the defendants. You rarely see the tragic victims that seem to be whom media seem to lionize. Nor do you see many white faces other than those who are wearing suits and police uniforms.  Any professional faces of color are often the clerks  who process papers and are also largely finding those jobs once secured by affirmative action and unions slowly disappearing as many cities are re-examining those jobs.

No wonder it is easier to simply send you to jail. A facility equally overcrowded and underfunded with more and more individuals ending up found dead with no explanation or justification. And many defendants simply committing suicide as a way out of the nightmare where they find themselves placed with no option other than jail often for crimes exaggerated to meet the need of a blustering political landscape fueled often by the once believed watchdog the Media.

The Media cannot be overlooked in the role of this Mad Maxian landscape. They are guilty too but without the requisite jail sentence. Here is an excellent study of the role of the media, or as called "mob journalism" and its role in convicting the innocent.

Here is another succinct synopsis in the role media plays in hyper vigilance when it comes to criminal justice. Cr The irony is that site is a European one. Socialists! Crime sells, Justice not so much.

And while I am a strong advocate of reading Magazines, Journals and watching the news, I am also a advocate of the plural part. Note the "s" on the end of all of the above. But again I have the time, I also make the time.   And that is my choice.  Things that don't interest me or when I don't know about something I STFU and don't feel the need to critique or demean others who do. An example of such - sports. Don't know, don't follow any and don't care. And when the insane 12th man nonsense overwhelmed Seattle with the Super Bowl arrived, I simply said just that and left well enough alone.

I have written many many times about the supposed intelligent and professional people who seem to think having that time and having that interest in media is something to be alarmed about as the media is garbage or depressing. I get both in equal doses. Well again, not debating with idiots, converse I will but that is the extent of it. I don't feel compelled to prove I am "righter" Ever go on Twitter and see flame wars or Facebook? Same difference. The war on idiots really should replace the war on drugs, monies and time better spent. Might find out that the whole drug thing might actually take care of itself that way.

As I like to remind myself when I encountered the Judicial system I was fucked without dinner or drugs. At least my date had the decency to give me drugs before he fucked me. But we are all getting fucked in America if this stays the same.