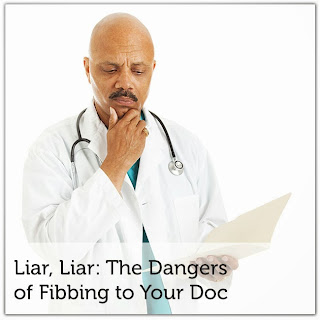 When I read this in the op ed page the first thought that came to mind was Doctor's Lie? Oh wait only when accused of malpractice.

Then I saw that pic and laughed my ass off. Apparently it is a danger to lie to your Doctor? To who? You or your Doctor?

I have nothing to add except - first do no harm - that did not work out. Maybe they need to re-examine the Hippocratic Oath and call it the Hypocratic one.

For the record it is neither ethical nor moral to lie, illegal? Well that one is gray area in America today. You are only as good as the lies you tell or the liar who tells them. Jim Carrey should remake Liar Liar and star as a Doctor, it might be a box office dud.


When Doctors Need to Lie

I ONCE had the unenviable task of informing a 22-year-old Jamaican man that he was suffering from severe heart failure and would probably need a heart transplant. The man’s father warned me that his son would be devastated to hear the diagnosis. “It would mean a lot to me if you could go back in and tell him he’s going to be all right,” the father pleaded. “Please tell him that if he does the things you say, he’s going to be O.K.”

Though physicians are obligated to disclose all relevant medical information to their patients, it was obvious that this young man wasn’t prepared to hear the news I had to present. He was lying on his stomach, crying, refusing to turn around to talk to me. So I told him exactly what his father had requested. Then, over several days, I eased him into the knowledge of his true condition. Doctors sometimes have to know how to keep secrets.

The moral basis for withholding information from such a patient is clear: Above all, physicians must do no harm. The underlying philosophy is paternalism. Paternalism derives from the image of the paternal figure, the father, in a family. The father is motivated by an interest in his children’s welfare. He acts on their behalf, but not at their behest. The beneficiaries — his children — may even repudiate the actions taken on their behalf.

Such paternalism was once widely accepted in medicine. In the mid-19th century, the American Medical Association’s code of ethics stated that physicians had a “sacred duty” to “avoid all things which have a tendency to discourage the patient and depress his spirits.” But times have changed. The prevailing ethical mantra in medicine is patient autonomy. Today, patients own their health information. They have the right to direct their own care, and to do so they must be fully informed. As doctors, we no longer “care for” as much as “care with” our patients through their illnesses.

While this is a welcome development, it should not obscure the fact that there is still a place for old-fashioned paternalism in medicine — though the decision to defy a patient’s wishes or withhold information is one of the trickiest that we doctors face.

When I started my medical internship, in 1998, I viewed patient autonomy as an absolute good, an ethical imperative that trumped all others. I had learned in medical school about some of the most infamous breaches of autonomy in the history of medicine. For example, in the Tuskegee experiment, a clinical study conducted by the United States Public Health Service between 1932 and 1972, black men with syphilis were intentionally left untreated, despite the availability of penicillin, in order to study the disease’s complications.

I also learned that even well-meaning paternalism can be damaging. The doctor-patient relationship is founded on trust, and any instrument of paternalistic interference not only compromises the relationship but also can erode faith in the profession. Studies have shown that patients who have been deceived by their physicians, even if the deception is well intentioned, have reported immense frustration and even thoughts of suicide. Who are we as doctors to decide which truths our patients can handle?

Patients may of course experience regret because of what they later regard as their bad decisions. But many people argue, as the medical ethicist Katie Watson did last month in the Journal of the American Medical Association, that the cost of regret must be balanced against the “dignity of risk”: the fact that pain or regret can also be an opportunity for growth. “To the degree decisional regret is harmful,” Professor Watson wrote, “the regressive remedy of eliminating or reducing competent adults’ decision-making authority is worse.”
Watch Now: How to make British marmalade cake


But as I have learned over the years, autonomy can be a double-edged sword. It may conflict with other moral virtues, such as a doctor’s obligation to do the best for his patients. Surely the standard for a patient’s ability to make his own decision should be raised as the consequences of the decision become more severe. If an ill-advised decision could cost your patient his life, are you not compelled as a physician to prevent him from harming himself?

Year after year I continue to struggle with these issues. No ethic in medicine is absolute.

OF course, even when a doctor believes that a paternalistic approach is justified, he should aim to keep it as “soft” as possible. Soft paternalism involves negotiation, persuading a patient to see things from your point of view. Hard paternalism, on the other hand, is coercive. It is what parents routinely practice. As a parent, you are duty-bound to prevent your children from making bad decisions or doing harm to their bodies.

Even so, there may be a place in medicine for hard paternalism, too. I am reminded of a patient I took care of some years ago. Fifty-something, he had received a stent to open up a blocked coronary artery. A few days after the procedure, while on blood thinners to keep the stent from clotting, he started bleeding into his lungs. He needed to be intubated with a breathing tube or he was going to die. However, I was informed that he had told doctors that he never wanted to be intubated.

The bleeding was a reversible complication I had seen several times. I was sure that with a few days of ventilatory support, it would stop and we would be able to pull out the tube. The alternative was to watch him drown in his own blood. I didn’t know the quality of the discussion he’d had with the other doctors, and I couldn’t talk to him because he was nearly unconscious from lack of oxygen.

So with a troubled heart I intubated him. He had a rocky course. The bleeding in his lungs continued for several days, requiring large blood transfusions, but it eventually stopped. He had protracted fevers. After a few days, his condition improved. A week after that, the breathing tube was removed.

When I went to see him, he didn’t recognize me. “When you were really sick, I was one of the doctors who made the decision to put in the breathing tube,” I said. He nodded, eyeing me curiously. “I know you didn’t want the tube,” I went on, “but if we didn’t put it in, you would have died.”

He nodded again. “I’ve been through a lot,” he finally said, his voice hoarse from two weeks of intubation.