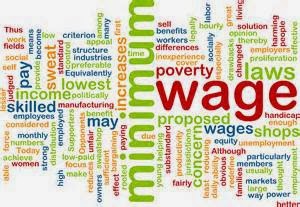 Some good news and not so good news is that for many minimum wage workers that minimum rises above the federal base level of abject poverty to working poverty.  And when it becomes a political issue versus a social moral one I am sure that will work out.  Look at immigration, well maybe not that how about abortion?  Maybe not that one either.  Hey what about gay marriage? Well one out of three.

The debate seems to center on what is too high to make ends meet for the owners of businesses to ensure profitability for the business.  I see that would be an important element in the equation of business.  As in all mathematical formulas there are many variables which must be considered and wages and benefits are a part.  What has been the predominant one for most businesses and those are the big versus the small ones is the "shareholder" happiness. These are unnamed people who are named vaguely and frequently as the reason why a business can or cannot do anything that would somehow upset them.  They are never interviewed, named or even asked if that in fact is the case.  I would love to see a vote, a spokesperson or some documentation that supported and verified these vague claims by the CEO that says "hey we can't have a wage rise here, thanks, signed the shareholders"  They take votes by proxy so why not a public response in the same way? Just an idea.

Who "they" are are Wall Street brokers.  They are the largest impetus to preventing any changes in business that actually lead to a reduction in profit margins.  That reduction affects their bonuses and in turn fees that they bill the company and that is who "they" are speaking of.

Watching the Wolf on Wall Street this Christmas I couldn't laugh any more or less when you think that this occurred a decade ago, the villians and victims are still with us and little really changed as a result.  Even the Martha Stewart of the piece, Steve Madden, comes off as a vague backstory which is a major variable in that equation that led to the collapse of that business. But hey its only a 3 hour movie.   Everyone has a story and that was not the theme of this movie.  I am unclear what or if there was a theme but Leonardo DiCaprio and Jonah Hill are well worth the price of admission.  Why I got a Behind the Candelabra vibe I am unsure, but that was another true tale where I thought the back story was the more interesting one and the one I wanted to hear.

But as I digress, I looked around the theatre on Christmas and thought it was ironic that we all paid 10 dollars for a matinee that was about billionaires and when you added the collective incomes of most of us there we probably could not have come close  and add the irony that the Regal Cinemas has a history of labor relation problems.

We are moving away from having ticket takers, sellers and concession workers and that is the threat or promise by the owners to ensure compliance and of course subjugation to the corporation and their shareholders demands.

We have an ongoing labor dispute with Boeing and much is being debated about that extortion and subsequent threats by the corporation and what they will do if they are required to pay more and earn less for those shareholders.

We have just had a city raise its minimum above the state level and it too received an early new year gift by a Judge who put a moritorum on that wage rise.  This is  response to the businesses, largely airlines who filed the suit, in an attempt to squeeze more than just legroom out of the workers in the region.  And of course the Judge is an elected official and that need for campaign funds have no sway or influence but it is a worthy question when the issue of tort reform or the supposed activist Judge are frequent accusations so why not add another to the mix? Isn't that fair and just?  And just the fact that these corporations have no problem  spending money on Lawyers, however,  paying a living wage a problem.

And we have lastly the new "Socialist" elected to the City Council here.  She is a polarizing figure undoubtedly and is already being watched nationally for having that moniker after her name.  Her campaign advocated a $15/hr wage as essential for living.  Let's see in this City of corruption, duplicity and utter divisiveness if she gets even close.  Washington State minimum wage is higher than many other States so to the John Galt set isn't that enough?  It never is when the rents in Seattle are the highest in the nation.  But you must be a loser if you have to rent right?  There is always a counter argument to the Galtian crowd that somehow makes everything your fault and responsibility.

Working wages are living wages. But debating about what defines both seems to be the issue.  Until it is understood that each area, region and city has its own dynamics economically you cannot sweep the narrow picture with the wide brush.  But in America it is what we do regardless.   We like our blame and reasoning we just don't like facts, logic or details. That takes too much time, energy and intelligence. We have little of it frankly.  I want one person to read a newspaper just once a week to actually read would be amazing let alone a newspaper. But then I realize that would actually require a newspaper to be informative and well written.  Again, adding another variable into the equation only further complicates it from simple math to algebra and that is hard!

(I once had a conversation with an Attorney/Idiot who corrected me about the difference between the two... okay adding and subtracting two numbers even with decimals is still "simple" math but hey I don't have a JD from some law school  that I had never heard of so what do I know? I love Lawyers they make my Conversations with Idiots seem highbrow)

We need to realize that even when you don't have a fancy ass law degree or some other diploma that you have paid six figures for you still need to eat food. True you can't afford to buy luxury mobiles as the rich and not famous seem to be indulging in.  After reading this article I didn't know if the Wolf was that far off in absurdity for indulgences.  Everything old its new.... blah blah.  But I did note that one fancy ass car buyer was a radiologist.  Explains those hospital bills and costs doesn't it. Daddy needs a new Tesla apparently, well at least it is a "green" car.

And lastly we have people who do try to get an Education but life, wow that living thing comes up a lot, sometimes gets in the way and the same Government who claims getting an education is a pathway to a better job and that life thing again, becomes the creditor and in turn the debtor.  Here are more tales of horror from those who simply tried to pull up those bootstraps and ended up pulling them apart.  Nothing says more than the very Government hiring those who harass and garnish wages from those who need it.  It is like the Mafia only less broken kneecaps.

I am exhausted from writing this and when I try to discuss this to encourage, inspire, anger and simply just exchange thoughts with others I am more often met with looks of confusion and in turn responses that usually have the following phrase - "you should not read that crap."  Yes that reading is fundamental to intelligence is also a block to mental health apparently. Good to know that the new year brings nothing new.  As I like to frequently say also "I am the brain injured one."

Still have a sense of humor and frankly I am pretty sure that is why I still stand and still believe that there are those who are willing to fight the fight as it is a good one.