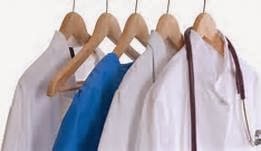 ....before returning to work.  You see that notice is almost every restaurant and coffee shop and yet you wonder as the same kids giving you your doppio latte are also required to scrub said toilets and mop the floors after finishing their 9.77/hour shift.  Think they do?  Well Doctors and other medical professionals don't and they see sick people all day and make a lot more money.

Most staph infections generated in this country come from Hospitals and Physicians so I would be much happier if they threw in that double latte with my bacterial infection.

Today comes a new addendum to the already overwhelming demands of Obamacare as they in the Medical Industrial Complex will have you know, is a dress code.

I wore uniforms all my student life as a child in school.  I was told to wash up before dinner, don't touch my face if my hands had been in contact with public facilities and cover my mouth when coughing. Been on a public bus lately or in a public school toilet?  Yes didn't think so.  We have something lacking in this country that falls between etiquette and just common sense.

I look forward to Doctors and Nurses simply treating people with time and dignity. What they wear is the least of it but if they can't launder those crap scrubs and coats they wear, what does that say about them as people let alone people in charge of your health?   Add another name to the list "dirty filthy pigs"  Well it beats Rapist, Murderer, Thieves, Con Men and Gossips.

My mother used to also say "cleanliness is next to Godliness" Maybe a little Religion is not a bad idea or at least the idea of it.

JoNel Aleccia NBC News
5 hours ago
Lab coats hang in a row at a hospital. New guidance suggests that doctors and other health workers launder their coats at least once a week and hang them on hooks when they're actually examining patients.

A new dress code for doctors, nurses and other health care workers calls for outfits that may be short on style, but long on what it takes to keep dangerous germs from spreading among patients.

Short sleeves, bare hands and forearms and white coats that are laundered at least once a week — if not more often — are the keys to keeping nasty bugs such as Staphylococcus aureus from hitching a ride on a doctor’s wrist.

Neckties are questionable. Watches and rings have to go. It’s not clear what to do about name tags, lanyards, necklaces and cell phones, but when in doubt, it’s best to clean the offending items — or get rid of them.

That’s according to new guidance on hospital attire released Monday by the Society for Healthcare Epidemiology of America, or SHEA. The group obsessed with stopping infections in hospitals and health care settings turned its attention to dozens of studies that suggest that grimy hospital garb might be responsible for spreading germs.

To be sure, no one has discovered a direct link between the germs on health worker clothing and actual infections, noted Dr. Gonzalo Bearman, a hospital epidemiologist with the Virginia Commonwealth University System and a member of the SHEA guidelines committee. But, he said, it makes sense that there would be a connection.

"There's a theoretical basis that if you have clean clothes, you have less chance of transmitting a pathogen," he said.

SHEA members looked at studies that have found a range of worrisome bugs, from Acinetobacter and Pseudomonas to Clostridium difficile, detected on the sleeves, pockets and other sites of health care workers' coats and scrubs. One study found that a third of doctors’ neckties grew Staph aureus in the lab; several found that the germs were often resistant to the top drugs used to treat them.

SHEA members came up with the new guidance, which also calls for sturdy, closed-toe, non-skid shoes and for any clothes laundered at home to be washed with hot water and bleach.

The group is urging hospitals to consider the adopting the new guidelines, or to pay greater attention to them if they’re already in place. They’re also calling for more research to nail down exactly how hospital garb spreads infection, in hopes of recommending a health worker wardrobe that’s both stylish — and safe.
Posted by Unknown at 7:39:00 PM