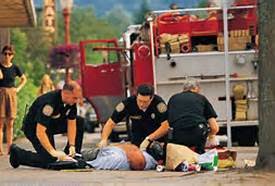 I read this in the Atlantic Wire and went "wow really?"  Well no I didn't.  After spending the better part of the last few years pointing and laughing at the debacle called the Affordable Care Bill, which does nothing with regards to 2 out of the 3 parts of the name. Bill yes as we will see plenty of them.

And then I went to catch a bus today and saw a major accident that right now I still reel from shock.  A car racing lost control and crashed into a pole then into a cement wall crushing one vehicle and splitting the other car parked into two pieces.  Apparently both driver and passenger are alive but in critical condition,  I had to leave, too many memories and horrors of my own to remain and be the looky lou as one woman did at mine, not even bothering to call 91,  yet spoke to every Police Officer on the scene.  She saw nothing only heard the impact but waddled down to poke her nose into the accident and did NOTHING to save or help me.  I call her a Cunt but the man who did save my life, aggressively pushed for care and stood by and tried to talk to the Officers on the scene who also never laid eyes or hands on me, don't seem to recall this Gentle-man.  Funny he recalls them and me two years later.

I could not nor would rise up to either of those two, I had to leave.  I knew the song, both the lyrics and the tune to this one and had no desire to repeat it.

And I also knew the drill they would be taken to Harborview Hospital and if not dead by arrival they likely will be with the agents of death there.  Once evidence would be taken to make the lack of investigation easier, they will be placed in the dumpster or thrown out to families confused, frightened and intimidated by the goon squad staff of "social workers" employed by Harborview to cover up their incompetence and laziness.  Know that song too.

So read the article below and pray you never need help of any kind, you won't get it nor can get it. Few times you use the two conjunctives together - won't or can't - but I did today and I don't feel good about it nor should I but this is Seattle and we have other priorities to care about, human lives no, but the 12th man yes.  Sad. Grim.Pathetic.