We All Do Drugs 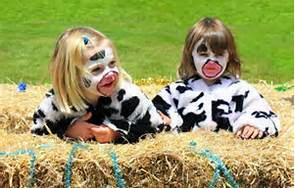 Shocking I know! (I may have to patent this as my trademark) But you are what you eat.

But it is in your food and water and unless you live on Bainbridge Island, Washington where they have the fewest children vaccinated in the United States you are just like the animals you eat, drugged.

Thankfully but of course with more loopholes than Swiss cheese, sadly American produced swiss cheese which makes it less delicious and in turn healthy although maybe not as even they found a way to circumvent the rules. But for now the FDA is trying to restrict the use of antibiotics in livestock. Chickens well you can't have it all.

The article clearly discusses the pros and of course cons but as one likes to remind oneself that if the industry who actually is behind the laws, and not behind as support, but behind as in actually write them are currently supporting them we might have a chance of not getting a side of antibiotics with our bacon.

F.D.A. Restricts Antibiotics Use for Livestock

WASHINGTON — The Food and Drug Administration on Wednesday put in place a major new policy to phase out the indiscriminate use of antibiotics in cows, pigs and chickens raised for meat, a practice that experts say has endangered human health by fueling the growing epidemic of antibiotic resistance.

This is the agency’s first serious attempt in decades to curb what experts have long regarded as the systematic overuse of antibiotics in healthy farm animals, with the drugs typically added directly into their feed and water. The waning effectiveness of antibiotics — wonder drugs of the 20th century — has become a looming threat to public health. At least two million Americans fall sick every year and about 23,000 die from antibiotic-resistant infections.

“This is the first significant step in dealing with this important public health concern in 20 years,” said David Kessler, a former F.D.A. commissioner who has been critical of the agency’s track record on antibiotics. “No one should underestimate how big a lift this has been in changing widespread and long entrenched industry practices.”

The change, which is to take effect over the next three years, will effectively make it illegal for farmers and ranchers to use antibiotics to make animals grow bigger. The producers had found that feeding low doses of antibiotics to animals throughout their lives led them to grow plumper and larger. Scientists still debate why. Food producers will also have to get a prescription from a veterinarian to use the drugs to prevent disease in their animals.

Federal officials said the new policy would improve health in the United States by tightening the use of classes of antibiotics that save human lives, including penicillin, azithromycin and tetracycline. Food producers said they would abide by the new rules, but some public health advocates voiced concerns that loopholes could render the new policy toothless.

Health officials have warned since the 1970s that overuse of antibiotics in animals was leading to the development of infections resistant to treatment in humans. For years, modest efforts by federal officials to reduce the use of antibiotics in animals were thwarted by the powerful food industry and its substantial lobbying power in Congress. Pressure for federal action has mounted as the effectiveness of drugs important for human health has declined, and deaths from bugs resistant to antibiotics have soared.

Under the new policy, the agency is asking drug makers to change the labels that detail how a drug can be used so they would bar farmers from using the medicines to promote growth.

The changes, originally proposed in 2012, are voluntary for drug companies. But F.D.A. officials said they believed that the companies would comply, based on discussions during the public comment period. The two drug makers that represent a majority of such antibiotic products — Zoetis and Elanco — have already stated their intent to participate, F.D.A. officials said. Companies will have three months to tell the agency whether they will change the labels, and three years to carry out the new rules.

Additionally, the agency is requiring that licensed veterinarians supervise the use of antibiotics, effectively requiring farmers and ranchers to obtain prescriptions to use the drugs for their animals.

“It’s a big shift from the current situation, in which animal producers can go to a local feed store and buy these medicines over the counter and there is no oversight at all,” said Michael Taylor, the F.D.A.’s deputy commissioner for foods and veterinary medicine.

Some consumer health advocates were skeptical that the new rules would reduce the amount of antibiotics consumed by animals. They say that a loophole will allow animal producers to keep using the same low doses of antibiotics by contending they are needed to keep animals from getting sick, and evading the new ban on use for growth promotion.

More meaningful, said Dr. Keeve Nachman, a scientist at the Johns Hopkins Center for a Livable Future, would be to ban the use of antibiotics for the prevention of disease, a step the F.D.A. so far has not taken. That would limit antibiotic uses to treatment of a specific sickness diagnosed by a veterinarian, a much narrower category, he said.

Another skeptic, Representative Louise M. Slaughter, a Democrat from New York, said that when the European Union tried to stop companies from using antibiotics to make farm animals bigger, companies continued to use antibiotics for disease prevention. She said antibiotic use only declined in countries like the Netherlands that instituted limits on total use and fines for noncompliance.

But another longtime critic of the F.D.A. on antibiotics, Dr. Stuart B. Levy, a professor of microbiology at Tufts University and the president of the Alliance for the Prudent Use of Antibiotics, praised the new rules. He was among the first to identify the problem in the 1970s. “I’m kind of happy,” he said. “For all of us who’ve been struggling with this issue, this is the biggest step that’s been taken in the last 30 years.”

Mr. Taylor, the agency official, said the F.D.A. had detailed what veterinarians needed to consider when they prescribed such drugs. For example, use has to be for animals at risk for developing a specific disease, with no reasonable alternatives to prevent it.

“It’s far from being a just-trust-them system,” he said. “Given the history of the issue, it’s not surprising that there are people who are skeptical.”

He added that some food producers had already curbed antibiotic use.

A spokeswoman for Zoetis, a major drug producer that said it would abide by the new rules, said the new policy was not expected to have a big effect on the revenues of the company because many of its drug products were also approved for therapeutic uses. (Dr. Nachman said that was an indication that overall use might not decline under the new rules.)

The Animal Health Institute, an association of pharmaceutical companies that make drugs for animals, said that it supported the policy and “will continue to work with the F.D.A. on its implementation.”

The National Pork Producers Council was less enthusiastic, saying, “We expect that hog farmers, and the federally inspected feed mills they purchase feed from, will follow the law.”

“It is part of our ethical responsibility to utilize antibiotics responsibly and part of our commitment to public health and animal health,” the council said in a statement.

The National Chicken Council said in a statement that its producers already worked closely with veterinarians, and that much of the antibiotics used in raising chickens were not used in human medicine.