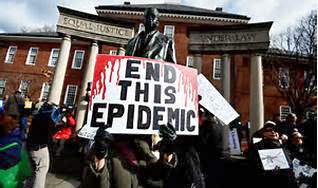 No there is no roundup of Guns, sorry crazed loons who think Obama is going to collect all your arms and pistol whip you with them a la Samuel L. Jackson Shaft style, no.

This is an entire capsule post about guns, gun violence and of course doing nothing about either.

First up we have this piece that after I stopped rolling my eyes, I realilzed Radley Balko's book summing up the warrior cop is just another word of saying, when people get guns, cops get even more.

The most effective way to reduce gun violence without significantly curtailing Second Amendment rights is to treat the problem as a public health issue, like smoking or drunken driving, rather trying to profile potential shooters, according to a report released Thursday by a panel of experts who were commissioned by the American Psychological Association to study the issue in the wake of the Newtown, Conn., massacre.

.The panel reviewed evidence on a wide variety of interventions intended to reduce violence, including suicides and homicides, in schools and in the workplace. It concluded that trying to predict who will act out by profiling was unreliable, and that more systemic preventive policies were far more effective.

The report offers a list of such policies, including legal changes like tighter background checks on gun sales, and programs in schools to teach nonviolent conflict resolution. The report also sharply criticized the lack of government money to study firearm violence.

“There’s been so much focus on crisis response, on getting to the scene on time and fortifying our schools, and that’s not going to take care of the problem,” said Dewey G. Cornell, a clinical psychologist and professor of education at the University of Virginia, who led the panel. “We need to focus on prevention more broadly, before the violence, to have a real impact.”

Experts who were not involved in compiling the report generally agreed with its conclusions, while acknowledging that some of the recommendations were politically challenging.

“It’s the most comprehensive and balanced analysis I’ve seen on gun violence in America, and it shows just how hard this problem is and how difficult it will be to solve,” said J. Reid Meloy, a forensic psychologist at the University of California, San Diego, and editor of the International Handbook of Threat Assessment.

One of the newer interventions that the report highlights is called behavioral threat assessment, which is used at an increasing number of schools and workplaces around the country. When a student or employee openly threatens others or shows evidence of planning an attack — researching it online, buying supplies — a behavioral assessment team gets the person help immediately, whether through counseling or more intensive therapy, and monitors the progress.

On campuses, that team typically includes an administrator, a member of the mental health staff and someone from school security. When necessary, the team coordinates with the local police to have the person involuntarily hospitalized.

In the wake of mass shootings, states like Virginia and Illinois have mandated that universities assemble threat assessment teams; Virginia just passed a law to mandate such services in schools at all levels.

This is considered secondary prevention — intervening if troubling behavior is noticed. So-called primary prevention includes conflict resolution programs, which have significantly reduced fights at some schools, and mental health screening, to try to identify young people who are at risk of depression.

The authors acknowledge that such measures will not catch everyone before an action. The Newtown gunman, for instance, lived and plotted in his basement, and it is not clear whether he qualified for any psychiatric diagnosis, as troubled as he was. But a commitment to preventive measures, Dr. Cornell said, would reduce the overall number of cases in the same way that such measures have worked to reduce smoking and drunken driving.

The panel called for a number of changes to gun laws, including prohibitions on ownership for domestic violence offenders, people convicted of violent misdemeanors, and those with mental disorders who are thought to be a threat to themselves or others.

“It really comes down to a question of political will,” Dr. Meloy said. “Until we have the political will to move legislation and a commitment on the part of the general public to do so, these changes are not going to occur.”

When you start criminalizing behavior and the idea that mentally ill are a danger you are now labeling a good portion of America as we all are mentally ill thanks to the ever increasing labeling and bullshit diagnosis by the American Psychiatric Association and their DSM, or the manual to provide dis-service.

This is the same group who admittedly see fewer patients on average, don't take medical insurance and are so far removed from society and the real urban problems that plague people, I can see this working out well.

Let's criminalize these people some more along with other issues that we have decided are a danger to society - drug users, prostitutes, drinkers who all of course drive and kill people, black people, poor people, any transgender individuals who are just too gay to be just gay, mothers, children who behave badly in school and immigrants. I am sure there are other margainalized groups that if we could round up like guns and relocate them to a State we all agree is not really all that great and would take them, then let's do that instead.

Then we have guns used to kill the sick, bringing new meaning to death panel. But prosecuting this man is of course proving we are tough on crime.

And thankfully it never fails to remind us that the Police, Prosecutors and Judges are immune. Not from violence but from the same penalites that face those they so are willing to accuse and not excuse, guilty or not.

Here we have the killer cop, different than a cop killer, cleared on his charges during Katrina. But in turn about is fair play, a man who may or may not be innocent also freed. Sometimes Justice works..and I am starting the believe the claim, "jails are full of innocent men."

NEW ORLEANS — A former New Orleans police officer who was convicted three years ago in the shooting death of a civilian in the days after Hurricane Katrina, but was granted a retrial on appeal, was acquitted Wednesday on all counts.

.A jury found the former officer, David Warren, 50, not guilty on two federal charges relating to the death of Henry Glover, who was shot behind a strip mall in a nearly abandoned New Orleans on Sept. 2, 2005.

The verdict was the latest of recent setbacks for the Department of Justice, which has prosecuted New Orleans police officers on charges including falsifying records and killing unarmed citizens in the aftermath of Katrina. In September, a federal judge ordered a new trial for five former police officers convicted in connection with the shootings of citizens, two of whom died, on the Danziger Bridge.

Alongside the criminal prosecutions, federal officials have pushed for a broad overhaul of the city’s Police Department, which is continuing.

The killing of Mr. Glover and the cover-up that followed, while less widely known nationally than the Danziger Bridge shootings, was perhaps the most gruesome of the criminal cases.

Mr. Glover had gone to the mall, also the site of a police substation, to retrieve suitcases that had been left there by others. Mr. Warren, who was guarding the substation, testified that he shouted a warning and shot at Mr. Glover, who he believed was armed, as he ran toward an unlocked gate. A witness who was with Mr. Glover said he was shot while lighting a cigarette, while another officer testified that Mr. Warren shot Mr. Glover while he was running away.

Three men drove a dying Mr. Glover to a school being used as a makeshift police station. There, the men say, they were beaten and handcuffed, while officers took the car they had arrived in, setting it on fire with Mr. Glover inside and leaving the burned-out car on a levee. Though people in the department knew about the episode, it did not become public until a reporter wrote about it in The Nation in 2008.

In 2010, five officers were put on trial in connection with the killing, and three were convicted. Mr. Warren, convicted of manslaughter, was facing 25 years in prison. But the federal Fifth Circuit Court of Appeals ruled this year that Mr. Warren should not have been tried in the shooting with those charged in the events that followed, and granted him a new trial.

By THE ASSOCIATED PRESS
Published: December 12, 2013

.A man who for decades insisted that Chicago police officers tortured him until he confessed to a 1982 rape he did not commit walked out of the Pontiac Correctional Center on Wednesday after 30 years in prison. The release of the man, Stanley Wrice, 59, came a day after a Cook County judge, Richard Walsh, overturned his conviction, saying officers had lied about how they had treated Mr. Wrice. It will be up to a special prosecutor to decide whether to retry him.

By THE ASSOCIATED PRESS
Published: December 11, 2013

.The Los Angeles police say a 60-year-old man has been booked for investigation of murder in the shootings of his wife, who had dementia, and his 58-year-old sister, who was in a vegetative state at a nursing home. Detective Andrea Moore said the man, Lance H. Anderson of suburban Santa Clarita, was booked Wednesday. He surrendered to officers at the Country Villa Sheraton nursing home in the North Hills area of Los Angeles, officials said.

And of course this man who is no stranger to guns and yet seemingly can never managed to get prosecuted for any crime, gun optional.

Florida: Charges Against Zimmerman Are Dropped

By THE ASSOCIATED PRESS
Published: December 11, 2013

.George Zimmerman will not face domestic violence charges because his girlfriend did not want to pursue the case and there was scant evidence of a crime, a state prosecutor said Wednesday. Mr. Zimmerman, 30, had faced charges of aggravated assault, battery and criminal mischief after a Nov. 18 confrontation at the central Florida house he shared with his girlfriend, Samantha Scheibe. Mr. Zimmerman was acquitted last summer in the fatal shooting of 17-year-old Trayvon Martin

Here is a series of narratives in the New York Times discussing our love and hate relationship with guns.
Posted by Unknown at 4:00:00 PM