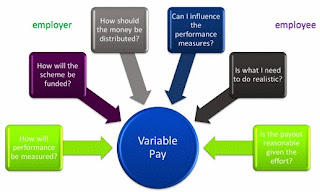 I have never understood the entire concept of what drives commission other than competitiveness and hubris.  And this is just another way of defining the year end bonus now up for grabs in many of the business sector and by that I mean Wall Street, K Street same street really but sure as hell not Main Street.

I have been a commission salesperson many times in my professional life and found it to be amazingly rewarding as I am simply good at my job.  Nothing wrong with that statement as it is a matter of fact.  But funny when you actually share that information with a business it is seen as arrogance - when you are a woman.  Many men I know are utterly incompetent when it comes to sales but they are given great leeway and permission to gloat and mask their sales figures when it comes to the final numbers.  Funny numbers do lie but when attached to a paycheck I have no problem with them.

The move away from commissions is not surprising as it often pushes people to sell products in over zealous and often unethical ways. Masked as bonuses it is the same thing only with a different name or as I call it a "synonym".   We simply underpay people and in turn we use artificial methods to generate and encourage them to "work harder".

When I sold shoes you were told to bring 3 pairs out and had to have a percentage of multiples as part of your quota.  I used to bring out 3 pairs, 2 of the same color and of course one was better made and more expensive, it is called up selling.  When we had sales on cheaper shoes I would  bring out the basics - black, blue and brown and say now is a good time to buy.  This is not any great secret to sales, I actually knew my products, the competitors, the costs and the options and I told my customer the truth about it all.  They made educated and informed choices and yes I made money doing just that.

I take that same concept in education, I tell them they have a choice, same coin different side, choose one.

But in our age of fraud, corruption and duplicity as some mark of success we have paid the ultimate price.  Dot com, Mortgage bomb and now some strange hybrid of each as the rich continue to reap the benefits of a manipulated economy.  Pays to know someone in the know  The Fed is now realizing that coincidentally with the change in command and it appears their stimulus for the rich may now be coming to an end.    Well even the Volcker rule as inadequate as it is is better than nothing to prevent some of the errors of the banking ways.

Now today we have Big Pharma, specifically Glaxo SmithKline, discontinuing payments to Doctors to push their drugs.. as that is what is push.. let's call it what it really is and commission to sales reps for the same.

Of course they are under investigation for bribery and other crimes and misdemeanors but unlike those who are selling, taking and misusing their products they won't be doing any time and having their lives ruined in the process.

We really do have a unequal system of justice, economics and well frankly politics.  We are all on some treadmill running from something and it is all like the ending of Homeland, confusing, complex and for some final.

But as the chief apologist for Wall Street, Andrew Ross Sorkin, in the New York Times points out today, this year is not as profitable as prior years and those that "hedge" their bets are taking them to the "bank".  There is your shift in the economy, the old rich giving way to the the new rich.

Paul Krugman was right in yesterday's column, it is all about income inequity, he just had it among the wrong group.