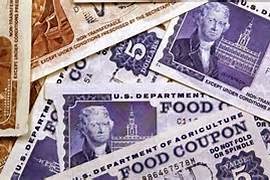 When one goes on a diet it is choice or occasionally medically mandated for health reasons but if you are a member of the Poors you are going on a politically mandated one.

The immense cuts of food stamps is just another way that the "entitled" class remand or is that remind the poor that they are just that.  The rich just call them tax cuts or subsidies and that is very different

For the record as a single woman "entitled" to food stamps you get $75 dollars a month.  That is now being reduced to approximately $60.  Just think for a man to actually have sex with a whore it is about the same. There is another way to supplement that entitlement although technically you have to declare that income so admitting to actually committing a crime as well, I wonder if they would cut the benefits or in turn turn you in?   I think Ebay might be a better option.

I was just watching Jimmy Fallon and he had Chris Christie on, if there is anyone who needs to go the food stamp "diet" this might be a good plan.

Of course in the shadow of wealth, the Poors wait for food supplements at Church's and Food Banks and nowhere is that more illustrative than in New York.   I can only imagine how annoying that would be stepping out of your town car in your nice Manolo's to step around that pile of shit on the sidewalk.  Fences make the greatest neighbors or so do high rises.

We are facing a nation that defines national security by the strength of its military.  To have a strong nation you strong people to stand for that nation.   Hard to stand when you hungry.  I can see why the Military is moving to drones and other technology to protect our borders as they don't need anything to eat.

CHARLESTON, S.C. — For many, a $10 or $20 cut in the monthly food budget would be absorbed with little notice.

But for millions of poor Americans who rely on food stamps, reductions that began this month present awful choices. One gallon of milk for the kids instead of two. No fresh broccoli for dinner or snacks to take to school. Weeks of grits and margarine for breakfast.

And for many, it will mean turning to a food pantry or a soup kitchen by the middle of the month.

“I don’t need a whole lot to eat,” said Leon Simmons, 63, who spends more than half of his monthly $832 Social Security income to rent a room in an East Charleston house. “But this month I know I’m not going to buy any meats.”

Mr. Simmons’s allotment from the federal Supplemental Nutrition Assistance Program, commonly called food stamps, has dropped $9. He has already spent the $33 he received for November.

The reduction in benefits has affected more than 47 million people like Mr. Simmons. It is the largest wholesale cut in the program since Congress passed the first Food Stamps Act in 1964 and touches about one in every seven Americans.

From the country kitchens of the South to the bodegas of New York, the pain is already being felt.

Christopher Bean, the executive director of a Bronx food pantry that is operated by a nonprofit organization called Part of the Solution, said that about 60 new families had visited the pantry in the past week because their food stamps had been cut.

They know they will be out of food well before the month is over. “People can do math,” he said.

In 2009, people started getting as much as 13.6 percent more in food stamps as part of the federal economic stimulus package, but that increase has expired. The reduction will save the government about $5 billion next year.

Over all, the nation’s food stamps program cost a record $78.4 billion in the 2012 fiscal year, according to the Agriculture Department. Although the amount given to each household — a figure that can vary widely depending on a complex formula of income and the number of mouths to feed — has been dropping by small amounts for the past few years, the roster of people seeking assistance grew steadily through the recession.

In the 2010 fiscal year, 40.3 million people were enrolled. Two years later, that number jumped by 16 percent. Just over 45 percent of those getting food stamps are children, according to the Agriculture Department.

Food stamps are likely to be cut more in the coming years if Congress can agree on a new farm bill, which House and Senate negotiators began tackling this week. The Republican-controlled House has approved cutting as much as $40 billion from the program over 10 years by making it harder to qualify. The Democratic-controlled Senate is suggesting a $4 billion cut by making administrative changes.

To poor families trying to stretch a couple hundred dollars into a month’s worth of groceries, all the talk about stimulus packages, farm subsidies and congressional politics means little. It is all about daily survival at the grocery store.

Ms. Rivera’s family of four saw their food stamps reduced by $36, to $420 a month. They pay rent and other expenses using her income and her husband’s disability check, and they supplement food stamps with bags of fresh vegetables, chicken and other groceries from a food pantry.

Ingrid Mock, 46, a former supermarket cashier who is disabled, was at the Bronx food pantry on Monday stocking up on canned green beans, pasta, ground beef and apples.

Ms. Mock, who has received food benefits for a decade and uses them to help feed her 12-year-old daughter, said her allotment had steadily decreased from as much as $309 about six years ago to a low of $250 this month, which reflected a new cut of $25.

Meanwhile, the price of staples like rice and corn oil have increased. So this month Ms. Mock will make choices. One dozen eggs instead of three, and only $1 worth of plantains. And no coffee or sugar for herself.

Ingrid Mock, center, at a food pantry in the Bronx on Monday. “I try to get most of the things my daughter eats because I can hold the hunger,” she said.

“I try to get most of the things my daughter eats because I can hold the hunger — I’m an adult — but she cannot,” she said. “They don’t understand when there’s no food in the fridge.”

The cuts are also hurting stores in poor neighborhoods. The average food stamps household receives $272 a month, which then passes into the local economy.

At a Food Lion in Charleston where as many as 75 percent of the shoppers use food stamps, managers were bracing for lower receipts as the month wore on.

At a Met Foodmarket in the Bronx, where 80 percent of the 7,000 weekly customers use food stamps, overall food sales have already dropped by as much as 10 percent.

“I wasn’t expecting it to be that fast,” said Abraham Gomez, the manager. Losing that much revenue could mean cutting back hours for employees, he said. <

Although several pilot programs around the country are designed to help people with food stamps eat better, including one by a Connecticut organization called Wholesome Wave that doubles the value of food stamps used at farmers’ markets, Mr. Gomez and others worry that less money for food means resorting to more dried noodles and canned tuna and fewer fresh vegetables and healthier cuts of meat.

Elliot Porter, 46, whose food stamps benefit dropped to $189 a month from $200, is a former property manager who is technically homeless but living with a friend while he goes to college.

At the Met Foodmarket this week, Mr. Porter had to perform a calculation with everything he reached for on the shelves, weighing his personal taste against cost and health.

A nutritionist who is helping him lose weight to avoid diabetes told him to buy a natural brand of peanut butter without sugar. But it cost $4.39. He decided he could afford only the store brand with sugar, which cost $3.79.

His situation may be better than many. During lunch at the Neighborhood House soup kitchen in Charleston this week, discussions about how to cope with cuts to food stamps were not hard to find.

People said they felt desperate. Many stuffed extra bread or cake into their pockets for later in the day, and traded advice on which agencies might be handing out free groceries later in the month.

“People at this level of need are already going hungry,” said Sister Noreen Buttimer, a nun who works at the soup kitchen, a Catholic charity. “It’s frightening how we think about the poor.”

If Congress Were Swayed by Facts…

If Congress were swayed by facts and evidence, lawmakers would not be considering cuts to food stamps and unemployment benefits. And the White House would rethink the cuts to Social Security that it included in its most recent budget.

The latest proof of how indispensable those programs are came on Wednesday, when the Census Bureau released new poverty figures under its so-called Supplemental Poverty Measure (SPM). Poverty is high in the United States no matter how it is measured, but the SPM — which puts the overall poverty rate at 16 percent, or 50 million people — shows that it would be much worse if not for government aid.

Some highlights from the new report:
In all, the new report shows that one third of Americans, 103 million people, were living in or near poverty in 2012. Clearly, more — not less, help is needed.

Congress, however, is determined to reduce food stamp benefits. The question now is not if, but how much they’ll cut — on top of cuts to food stamps that kicked in last Friday.

Congress will also have to grapple with renewing the program for federal jobless benefits, which expires at the end of 2013. In recent years, whenever the program has come up for renewal, lawmakers have cut it excessively.

As for Social Security, there seems to be little congressional momentum for cutting the program anytime soon. But the Obama administration’s proposal to lower the Social Security cost of living adjustment has increased the odds of ill-advised reductions during his second term. That would be a shame, because there are prudent ways to bolster the system’s finances that would not entail a diminution in what are clearly vital benefits to a large and vulnerable population.