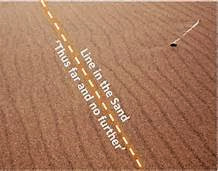 There is the idea that in many deals there is this proverbial line in the sand you do not cross. In business there are usually several lines, which right there may be part of the problem. There is the line of legality, what is illegal vs not; there is the line of the business philosophy or its own inherent code and there is the vague line of ethics. Morality and ethics are often believed to be synonymous, not necessarily, in fact I think they can be mutually exclusive.

You can have a strong moral code vested in that of the law of land or of church and faith. Morality is inherently individual and you can devise, explain, justify and excuse whatever lapse in that morality as one of error or oversight but overwhelmingly simply a lack of individual character failure.

Ethics are applied morality and usually of the corporate kind. They are codes devised by groups, organizations and individuals to encourage a sense of cooperation, compliance and a type of control. There are ethics in the Bar Association, the American Medical Association, the Girl Scouts, the Boy Scouts and of course other supposed organizations that govern financial services or regulatory bodies. Those are more private secretive ones, sort of pinky swear types that mean you won't fuck someone over just because you can. Really Unions have them but then they are the provenance of the beer and bowling type but just like their white collar counterpoints they too have had issues with how to define ethics vs morality.

I think we often overlook the backroom players in business, the heavy lifters. I see that more in align with the Accounting, Consulting of course Credit Rating Agencies as well as Insurance. They are the ones who may have competing and differing interests and obligations but they are together a team of sorts to ensure corporate compliance, management and investor support by ensuring that the companies they represent are in fact doing the right thing.

The argument by my dear John Galt friends is that they have such strong self preservatory interests that it is against their best needs and inclination to do anything dangerous, fraudulent or just plain stupid that could in fact harm their own reputation and security. If you have ever read the dull prose of Ayn Rand that is a type of cliff notes version to her eponymous love of all things free market. Alan Greenspan sat at her feet and sucked that wisdom, or whatever one calls it, like a pup at a bitch's teat. I think that analogy is quite appropriate.

I have often wondered when anyone would start to ask questions about the keepers of the books? I mean hasn't anyone seen a Mafia movie? It is the first place the Government goes when they are after the rat bastards. Shame the Mafia don't run Wall Street (or do they?), this problem might have found itself deep in the sea with cement shoes right now.

Today the article below discusses the failure of the Accounting agents to actually be just that an agent for the facts and truth. There are way more than 50 shades of grey hiding those facts.


Nowhere is that clearer than when regulators penalize partners of big firms. The Tammy Wynette song “Stand by Your Man” could be the industry’s anthem.

In 2001, when the Securities and Exchange Commission settled charges against Arthur Andersen for its involvement in financial fraud at Waste Management, a partner named Robert G. Kutsenda was banned for a year. He was not the partner in charge of the Waste Management audit, but an e-mail showed he had approved accounting that the S.E.C. said was improper.

While that settlement was being negotiated, Andersen put Mr. Kutsenda in charge of revising the firm’s “document retention” policy. The new policy encouraged the destruction of the kind of documents that became the evidence against him. His involvement became public later in 2001, when Andersen’s auditors cited that policy as justifying their destruction of documents related to audits at Enron. Regulators were not amused.

That case led to the demise of Andersen and, in 2002, to passage of the Sarbanes-Oxley Act, which established the Public Company Accounting Oversight Board to regulate the auditing industry.

Now, something similar has happened.

The oversight board this week announced that it had censured Deloitte & Touche and fined the firm $2 million. It seems that in 2008, the board suspended Christopher E. Anderson, a Deloitte partner, after concluding that he had approved accounting that allowed the truck manufacturer Navistar to cook its books while he was the partner in charge of the company’s audit. He was barred from being “an associated person” of any accounting firm for one year.

Mr. Anderson stepped down as a partner at Deloitte, but he did not leave. He went to work as an employee at the firm’s national office, which provides advice to Deloitte partners on complicated accounting issues. Among the areas in which he was deemed an expert were “Fair Value/Use of Specialists and Fraud,” according to a Deloitte directory.

There is evidence that Deloitte needed such expertise. In 2008, a board inspection of Deloitte concluded that it had failed to properly audit the use of specialists in several cases involving the fair value of assets. In a confidential part of the report, the board said its inspections indicated that “a firm culture that allows, or tolerates, audit approaches that do not consistently emphasize the need for an appropriate level of critical analysis and collection of objective evidence, and that rely largely on management representations.”

At the time, Deloitte responded to the board by saying it did not like the “second-guessing” shown by the regulators. It said “we strongly take exception” to the observation about its culture, which it said was simply wrong.

Years later, in 2011, the board released the confidential part of that report, saying Deloitte had failed to put in place the required changes during the year after the report was written.

So now we know that during the year the firm did not make the required changes, it used an auditor who had been banned from the industry as an expert in the very areas in which the board had found it deficient.

Having been cited for allowing improper accounting, Mr. Anderson was rewarded with a responsible and prestigious position. What does that say about Deloitte’s culture? Five years later, he remains with Deloitte.

In 2011, Deloitte’s then-new chief executive, Joe Echevarria, sounded apologetic when I talked to him about the board’s rebuke. This week he was said to be unavailable for comment about the board’s censure. The firm issued a statement saying that in 2008 it had taken “several significant actions to restrict the deployment” of Mr. Anderson, who was not supposed to work on client audits, but did.

The firm said it had instituted reforms to “prevent a similar matter from arising in the future,” adding “Deloitte takes very seriously all orders and actions of the P.C.A.O.B.” A spokesman added that “our engagement with the P.C.A.O.B. has been extremely constructive over the past few years.”

This comes out as the board is considering whether to force American accounting firms to tell investors the name of the partner in charge of an audit. In the past, the industry has bitterly fought such a provision, and the board has never taken a final vote on it.

In a comment letter early last year, Deloitte wrote, “We are not aware of evidence showing that disclosing an engagement partner’s name in the audit report would increase the partner’s sense of accountability or that it would cause the engagement partner to exercise greater care in performing the audit.”

Now there is such evidence. In a paper in the September-October issue of The Accounting Review, two accounting professors, Joseph V. Carcello of the University of Tennessee and Chan Li of the University of Pittsburgh, looked at what happened in Britain after that country began requiring audit partners to be identified in 2009. They examined audits of the same company in the year before the disclosure and the first year of the disclosure.

They found that after the partners knew their names — and not just the name of their firms — were going to be disclosed, auditors were more likely to issue qualified opinions and less likely to sign off on audits with managed earnings. The numbers reported by companies after the change tended to provide better indications of future cash flows than had been the case.

“Our results,” they concluded, “are consistent with the argument that requiring an individual audit partner to sign a report improves audit quality by increasing the partner’s accountability and transparency of audit reporting.”

Such identification of auditors has been going on for many years in Sweden, where nearly all companies, private and public, are required to disclose their audits. That enabled three academics — W. Robert Knechel of the University of Florida, Ann Vanstraelen of Maastricht University and Mikko Zerni of the University of Vaasa — to study audits of different companies done by the same partners of the Swedish affiliates of the Big Four firms.

They concluded, in a paper presented at a Canadian accounting conference this week, that companies audited by an individual partner, even in different industries and over time, tend to show similar “reporting aggressiveness and conservatism.”

The American accounting firms say it is the reputation of the firm that matters, and that firm procedures assure quality. “It is difficult to understand how this proposed disclosure would be used in a responsible manner (aimed at promoting audit quality) rather than for purposes that could be harmful to individual partners both professionally and personally,” said Ernst & Young in a letter to the board last year.

That firm told the story of one former Ernst partner who was sued. The partner left Ernst and went to work for a private company. But, the firm said, “years after the lawsuit had been dismissed” it “still inhibited his job prospects at his new company.” The firm said the suit “related to a purported major fraud.”

If you audit a company and fail to uncover a major fraud, perhaps you should expect your reputation to be harmed.

The Public Company Accounting Oversight Board is expected to unveil its latest proposal in December. That proposal is not expected to require the audit partner to sign the audit opinion, as is done in many countries, but to require disclosure of his or her name in the company’s annual report. The auditing firms in the past have resisted that idea, saying that if disclosure must be required it should only be in an obscure form that each auditing firm files with the oversight board once a year.

“Professionals routinely disclose their identity, and they do so proudly,” James R. Doty, the chairman of the oversight board, told me this week. “Why are auditors different?”