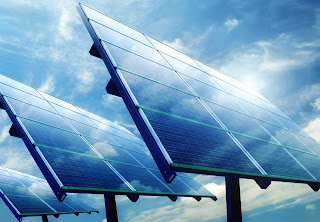 What is a turn in irony, some municipalities are now regretting the push for solar energy as it is a money loser - theirs.  What a turn about in green.

Frankly this is not shocking as anyone would realize that many of our municipal energy sources have been running on empty for quite some time.  Most losses in energy are in the transmission and to offset that loss we pay for it in higher rates.  The trade off is that by not upgrading the grid or encouraging further alternative energy, the simple ease of raising rates covers the loss.

As we struggle to develop, encourage and move away from conventional means of energy, there will be trade offs. The trade offs come mean less for more, as in less profit for private energy industries that provide and often run energy companies in many areas.  Well too bad, so sad.

There were two articles today about energy investment. One: the "entitlements" or tax credits encouraging consumers to vest and employ alternative methods of energy sourcing; the other: the role of investment opportunities in finding new sources of energy.

Last week I watched Gasland II and it served to remind me that our work here is not done when it comes to actually EDUCATING people about what this effort of fracking entails. Our quest for energy is in fact energy draining in many ways.  What the documentary discusses is that on one hand we have a Government talking the talk but when it comes to walking it, they walk away from admitting the failures of building a green energy plan for America. I have long realized that a degree from Harvard doesn't make you smarter it just makes you well connected. And to hear the former EPA head discuss on one hand the laws and rules to make our environment greener while actually doing nothing to secure it makes one laugh with all the posturing and posing on the Hill over such "job destroying" regulations.   Talk the talk and then walk off.

Energy is money. Energy is another one of the many last remaining public industries along with education that screams money and the private sector wants it, that is the entitlements they speak of - they are entitled to your money.


On Rooftops, a Rival for Utilities

For years, power companies have watched warily as solar panels have sprouted across the nation’s rooftops. Now, in almost panicked tones, they are fighting hard to slow the spread.

Alarmed by what they say has become an existential threat to their business, utility companies are moving to roll back government incentives aimed at promoting solar energy and other renewable sources of power. At stake, the companies say, is nothing less than the future of the American electricity industry.

According to the Energy Information Administration, rooftop solar electricity — the economics of which often depend on government incentives and mandates — accounts for less than a quarter of 1 percent of the nation’s power generation.

And yet, to hear executives tell it, such power sources could ultimately threaten traditional utilities’ ability to maintain the nation’s grid.

“We did not get in front of this disruption,” Clark Gellings, a fellow at the Electric Power Research Institute, a nonprofit arm of the industry, said during a panel discussion at the annual utility convention last month. “It may be too late.”

Advocates of renewable energy — not least solar industry executives who stand to get rich from the transformation — say such statements are wildly overblown. For now, they say, the government needs to help make the economics of renewable power work for ordinary Americans. Without incentives, the young industry might wither — and with it, their own potential profits.

The battle is playing out among energy executives, lawmakers and regulators across the country.

In Arizona, for example, the country’s second-largest solar market, the state’s largest utility is pressuring the Arizona Corporation Commission, which sets utility rates, to reconsider a generous residential credit and impose new fees on customers, months after the agency eliminated a commercial solar incentive. In North Carolina, Duke Energy is pushing to institute a new set of charges for solar customers as well.

Nowhere, though, is the battle more heated than in California, home to the nation’s largest solar market and some of the most aggressive subsidies. The outcome has the potential to set the course for solar and other renewable energies for decades to come.

At the heart of the fight is a credit system called net metering, which pays residential and commercial customers for excess renewable energy they sell back to utilities. Currently, 43 states, the District of Columbia and 4 territories offer a form of the incentive, according to the Energy Department.

Some keep the credit in line with the wholesale prices that utilities pay large power producers, which can be a few cents a kilowatt-hour. But in California, those payments are among the most generous because they are tied to the daytime retail rates customers pay for electricity, which include utility costs for maintaining the grid.

California’s three major utilities estimate that by the time the subsidy program fills up under its current limits, they could have to make up almost $1.4 billion a year in revenue lost to solar customers, and shift that burden to roughly 7.6 million nonsolar customers — an extra $185 a year if evenly spread. Some studies cited by solar advocates have shown, though, that the credit system can result in a net savings for the utilities.

Utilities in California have appealed to lawmakers and regulators to reduce the credits and limit the number of people who can participate. It has been an uphill fight.

About a year ago, the utilities pushed regulators to keep the amount of rooftop solar that would qualify for the net metering program at a low level; instead, regulators effectively raised it. Still, the utilities won a concession from the Legislature, which ordered the California Public Utilities Commission to conduct a study to determine the costs and benefits of rooftop solar to both customers and the power grid with an eye toward retooling the policy.

Edward Randolph, director of the commission’s energy division, said that the study, due in the fall, was a step toward figuring out how to make the economics work for customers who want to install solar systems as well as for the nonsolar customers and the utilities. The commission wants to ensure, he said, that, “we aren’t creating a system that 15 years from now has the utility going, ‘We don’t have customers anymore but we still have an obligation to provide a distribution system — how do we do that?’ ”

The struggle over the California incentives is only the most recent and visible dust-up as many utilities cling to their established business, and its centralized distribution of energy, until they can figure out a new way to make money. It is a question the Obama administration is grappling with as well as it promotes the integration of more renewable energy into the grid.

Utility executives have watched disruptive technologies cause businesses in other industries to founder — just as cellphones upended the traditional land-based telephone business, producing many a management shake-up — and they want to stay ahead of a fundamental shift in the way electricity is bought, sold and delivered.

“I see an opportunity for us to recreate ourselves, just like the telecommunications industry did,” Michael W. Yackira, chief executive of NV Energy, a Nevada utility, and chairman of the industry group the Edison Electric Institute, said at the group’s convention.

The fight in California has become increasingly public, with the two sides releasing reports and counter-reports. A group of fast-growing young companies that install rooftop systems, including SolarCity, Sungevity, Sunrun and Verengo, recently formed their own lobbying group, the Alliance for Solar Choice, to battle efforts to weaken the subsidies and credit systems.

They have good reason. In California, as intended, net metering has proved a strong draw for customers. From 2010 to 2012, the amount of solar installed each year has increased by 160 percent, almost doubling the amount of electricity that rooftop systems can make, according to the Solar Energy Industries Association. With federal tax credits and a rebate program for installation costs under the California Solar Initiative phasing out, determining how much to pay customers has become even more critical.

“Net metering right now is the only way for customers to get value for their rooftop solar systems,” said Adam Browning, executive director of the advocacy group Vote Solar.

Mr. Browning and other proponents say that solar customers deserve fair payment not only for the electricity they transmit but for the value that smaller, more dispersed power generators give to utilities. Making more power closer to where it is used, advocates say, can reduce stress on the grid and make it more reliable, as well as save utilities from having to build and maintain more infrastructure and large, centralized generators.

But utility executives say that when solar customers no longer pay for electricity, they also stop paying for the grid, shifting those costs to other customers. Utilities generally make their profits by making investments in infrastructure and designing customer rates to earn that money back with a guaranteed return, set on average at about 10 percent.

“If the costs to maintain the grid are not being borne by some customers, then other customers have to bear a bigger and bigger portion,” said Steve Malnight, a vice president at Pacific Gas and Electric. “As those costs get shifted, that leads to higher and higher rates for customers who don’t take advantage of solar.”

Utility executives call this a “death spiral.” As utilities put a heavier burden on fewer customers, it increases the appeal for them to turn their roofs over to solar panels.

A handful of utilities have taken a different approach and are instead getting into the business of developing rooftop systems themselves. Dominion, for example, is running a pilot program in Virginia in which it leases roof space from commercial customers and installs its own panels to study the benefits of a decentralized generation.

Last month, Clean Power Finance, a San Francisco-based start-up that provides financial services and software to the rooftop solar industry, announced that it had backing from Duke Energy and other utilities, including Edison International. And in May, NextEra Energy Resources bought Smart Energy Capital, a commercial solar developer. &lt;

But those are exceptions.

“The next six to 12 months are the watershed moment for distributed energy in this country,” said Edward Fenster, a chief executive of Sunrun, adding that if their side prevailed in California and Arizona, it would dissuade utilities with net metering programs elsewhere from undoing them. “If we don’t succeed, the opposite will be the case and in two years we’ll be fighting 41 of these battles.”