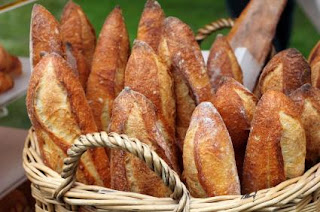 Apparently degrees are the equivalent to bread, the fresher the better. After a day or two it goes stale and no one likes to eat stale bread right?

As we struggle to find work for all ages the intra class warfare is now among the degreed.  Those with fresh minty degrees are clean and lovely and employable, those with stale breath not so much. Regardless of the cost, the ambition, the desire to work, those with degrees over a couple of years old apparently suffer from what the long term unemployed have - skill set or knowledge set atrophy.

This atrophy is fascinating as I think it is something akin to the acronym NIMBY (not in my backyard) or as I call it UIHTY - "until it happens to you"-  you don't think that there is anything wrong with that.

I will let you read the below article and MYOC.. make your own conclusions.  As I have written about and shared many times, these are more bullshit excuses or justifications to avoid hiring and paying people decent wages. Stockholders are people too my friends.

The New York Times interviewed President Obama who discussed the fraying social fabric of the disintegrating middle class but as before no plans or actions are in place to actually ensure and change that in the near or even distant future. As for Congress they have to repeal Obamacare and work on reproductive rights issues which are far more important that actually putting people to work which is how you build an economy.

Frayed Prospects Despite a Degree

At a time when many job seekers complain that their résumés vanish into a black hole, Charles Wells managed to get a high-level recruiter at Ernst & Young to meet with him in person, twice.

But the end result was disheartening: Mr. Wells was told, he said, that company policy required him to have at least two years of experience in the field before he could be hired.

If Mr. Wells were a newly minted college graduate, he would not have had that problem. Ernst & Young recruits heavily on college campuses for entry-level positions, no experience required.

But Mr. Wells graduated in 2011, during one of the worst job markets in history, and his work record since then — like countless numbers of his peers — doesn’t measure up to what employers like Ernst & Young demand for “experienced” applicants. Even as the jobs picture slowly improves, the disadvantage of bad timing follows those who graduated during the worst years. Applicants like Mr. Wells have neither the bright-eyed and bushy-tailed appeal of the class of 2013, nor the benefit of relevant work experience that might give them an edge.

“I’m competing against people that are graduating now,” said Mr. Wells, 27, who worked in construction and other jobs before starting college in 2007. “It’s easier to grab them up, because they’re fresh.”

His problems stem from the fact that companies typically divide their hiring into two pools: entry-level jobs, which are overwhelmingly filled by campus recruits, and experienced workers. Some allow recent graduates to stay in the first category for a year or two after getting their diploma. But recruiters say those applicants may find themselves at a disadvantage, especially if they have not been bolstering their résumés with classes, internships or volunteer work.

“If you’re a 2011 or a 2012 grad, the competition just got fierce — even more fierce — with the let-out of the 2013 class,” said Alexa Hamill, the United States campus recruiting leader for PricewaterhouseCoopers. “It’s like you’re in overtime, and they brought in the fresh team The impact of this is difficult to measure because government statistics do not allow for a comparison of the fate of this year’s graduates with their immediate predecessors, instead lumping all college graduates under 25 into one group. And certainly college graduates as a whole are doing vastly better than those with only a high school degree (young college graduates have an unemployment rate of just over 8 percent, while the unemployment rate for high school graduates within the same age group is close to 20 percent).

But everything that is known about the job market points to the fact that Mr. Wells and his cohort are feeling the pinch. Many of the country’s largest companies make most of their entry level hires on campus, meaning there are no slots for the hapless person who had the misfortune of graduating in 2011. And historically, those who graduate during a recession earn far less than their peers who do not, and it can take a decade or more for them to catch up. Many have been forced to settle for lower-wage, lower-skill jobs, which has in turn helped increase joblessness among the high school graduates who previously held those jobs.

In 2000, about 60 percent of employed college graduates were working in jobs that required a degree, said Andrew Sum, director of the Center for Labor Market Studies at Northeastern University. Now fewer than half are.

Campus recruiters at a variety of institutions said that those who graduated in 2013 have had a relatively easy time finding jobs, in part because the prolonged economic downturn has made them more focused on preparing themselves for the workplace. Alumni who graduated in the previous few years continue to trickle in, asking for help.

“The class of 2009 just got royally screwed, because their first four years in the labor market were this horrible thing,” said Heidi Shierholz, a labor specialist at the Economic Policy Institute, a left-leaning research organization in Washington. “This year’s first four years won’t be that bad.”

Dan Black, the Americas director of recruiting for Ernst & Young, said that young applicants who were not current students needn’t bother sending a résumé without some connection to the firm through a friend, mentor or acquaintance. “You will not find entry-level jobs listed on our Web site,” he said.

For those with a job history marred by the recession, “we want to see that you have made productive use of your time since graduation — the Peace Corps, Teach for America, course-work, a C.P.A. exam,” he said. “I don’t think it’s bad to be a barista at Starbucks, but we need some evidence that you are continuing to move toward that goal of entering the field.”

Another challenge for the recent graduate is that companies have increasingly been hiring workers from their own pool of interns. Williams, an energy company based in Tulsa, Okla., started its internship program in 2005 and now makes 85 percent of its entry-level hires from the intern pool, said Paige Cole, the senior recruiter at Williams. Interns must be current college students.

“You actually could be making your first career choice decision when you accept that internship,” Ms. Cole said.

Even as the financial crisis hit, Mr. Wells, who received a degree in geography from Kennesaw State University outside Atlanta and is now teaching English as a second language, remained confident in his prospects, believing that he could set himself apart from his peers. “I figured right away I was going to have a job, but I’m learning a large lesson right now,” he said.

Mr. Wells said his skills had already become outdated. New graduates in his major are required to learn technological skills that he missed out on. He has had no luck applying at smaller companies where he could get the experience he needs for a job at Ernst & Young.

Unlike those who were blindsided by the recession after they started school, the class of 2013 knew even as first-year students that their competitiveness depended on getting internships, studying abroad and choosing their majors carefully. Mr. Wells, who is now heading to business school, said he wished he had chosen a more marketable major.

Karen Andrews, the executive director of career services at Kennesaw State, said that because so many newer alumni were unemployed or working in basic service industry jobs, she formed an alumni job club and ultimately hired a full-time alumni career adviser. “When the economy tanked, their lack of preparation became very obvious,” she said.

Still, many have tried to make the best of their situation, portraying their disappointing experience in the work force as real-world seasoning that might appeal to employers.

Ariana Wharton, 26, graduated from Kennesaw in 2011 with a degree in communications and public relations after switching majors from pre-med. When she did not find a job right away, she volunteered for the Red Cross and started her own business delivering fast food. She joined Ms. Andrews’s job club, where she fine-tuned her résumé. When she went to a job fair earlier this year, armed with a new elevator pitch, she landed a job in customer service for an international phone company, making $35,000 a year.

“I definitely felt like I had an edge over the students,” she said.
Posted by Unknown at 6:37:00 PM