One of my favorite expressions is to the incredulous that believe that nothing happens to good people who do good things, "work hard" and have all the I's and T's, dotted and crossed is to "What-ever. Wake up White People."

But I loved this article today to find that one more white shoe law firm is taking it in the shorts. YAY. Of course none of the young dismissed Attorneys would hang a shingle out, call their firm, Street Legal (one of my most favorite Canadian shows as a kid) and actually do street law; law that helps the poor and in need of navigating perhaps the most damaged, frustrating and absurd complexes that almost (I said almost) makes the Medical Industrial Complex seem accessible.   But Mommy how would we pay for our six figure education that did nothing for us! Hell if I know kid, but I have a motion that I need written and filed.

Next up on the list soon I suspect. The technology sector. Couldn't happen to a nicer group. Hope they load up on snacks on the way out.. free food can't go to waste. They could drop it at a Shelter or food bank... nah. 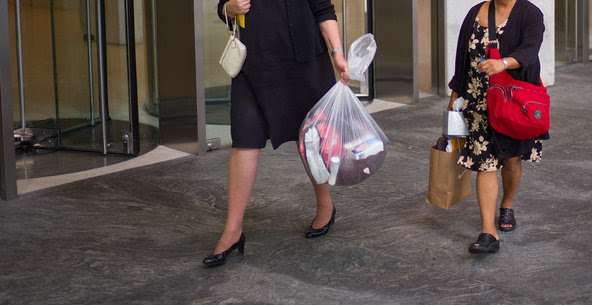 The news on Monday that Weil, Gotshal & Manges, among the nation’s most prestigious and profitable law firms, was laying off a large number of lawyers and support staff while also reducing the pay of some of its partners, sent shock waves through the industry and underscored the financial difficulties facing the legal profession.

Sixty junior lawyers, known at firms as associates, lost their jobs. That amounts to roughly 7 percent of Weil’s associates. Annual compensation will be reduced for roughly 30 of the firm’s 300 partners, in many cases by hundreds of thousands of dollars. And 110 non-lawyers — roughly half of them secretaries — were let go.

The leadership of Weil, a New York-based firm of 1,200 lawyers that counts General Electric and Sanofi as marquee clients and handled the bankruptcy of Lehman Brothers, informed its employees Monday morning about the reductions.

“While we have been able to avoid these actions in the past, and it is very painful from a human perspective, the management committee believes that these actions are essential now to enable our firm to continue to excel and retain its historic profitability in the new normal,” Barry M. Wolf, Weil’s executive partner, wrote in a firmwide e-mail.

The “new normal,” in the view of Weil’s management and echoed by legal industry experts, is that the market for high-end legal services is continuing to shrink. Dan DiPietro, chairman of the law firm group at Citi Private Bank, said he believed that the profession could experience a wave of job cuts. He said that there were too many lawyers at the country’s largest firms, estimating the excess capacity at as much as 10 percent of the lawyer population.

“My guess is that a good number of firms have been thinking about right-sizing and waiting for someone to provide them cover and we’ll see more of these moves,” Mr. DiPietro said. “As difficult as layoffs are, it seems that they will be necessary for some firms to get in sync with the current market dynamics.”

Those market dynamics have shifted starkly from the boom years leading up to the financial crisis. Pre-2008, profitability exploded and the number of lawyers grew at the country’s top firms as demand increased about 4 percent a year. But demand has been flat to down for the last five years, according to several industry reports, and shows little sign of picking up.

At Weil, whose partners make, on average, about $2.2 million a year, the situation is unique. During the depths of the downturn, the firm avoided the layoffs that some other firms were forced to make. That was largely because of the firm’s pre-eminent bankruptcy practice, which advised both General Motors and Lehman on their Chapter 11 filings. Those assignments, particularly Lehman, generated hundreds of millions of dollars in fees, not only in bankruptcy work, but also from the reams of litigation that flowed from them.

In an interview last week, Mr. Wolf said that Weil’s leaders thought that as the crisis-related assignments wound down and the economy recovered, the firm would see a pickup in its “transactional business,” the lucrative work of advising corporations and private equity firms on acquisitions, as well as performing legal work for stock and bond offerings. But transactional activity at Weil remains soft and has not returned to anywhere near pre-2008 levels.

Nevertheless, the firm has performed well relative to its peers, according to data compiled by Bloomberg and Thomson Reuters. In 2012, Weil was ranked No. 1 in private equity representations globally. It ranked No. 2 in domestic mergers and acquisitions last year and has maintained that position in 2013, advising on deals like the American Airlines merger with US Airways. Still, Mr. Wolf said, there was not enough work to keep Weil’s army of lawyers sufficiently busy.

“Our market share has been improving, but the market has been shrinking,” Mr. Wolf said.

Mr. Wolf, a corporate lawyer who joined Weil in 1984 straight out of law school, said that while the decision to cut associates and staff was personally distressing for him and the management committee, there was little disagreement that it was the right one.

“We believe that this not just a cycle but that the supply-demand balance is out of whack across the industry,” he said. “If we thought this was a cycle and our business was going to pick up meaningfully next year, we would not be doing this.”

Monday was a grim day at Weil, with partners informing associates of their dismissals in one-on-one meetings. Each gets six months of severance. Partners subject to salary reductions have already been informed by firm management. (There are no partner cuts because under Weil’s partnership agreement, partners can be fired only for cause.)

The mass layoffs are the first in the 82-year history of Weil, which has 21 offices worldwide and headquarters in the General Motors building, one of New York’s most coveted business addresses. Last year, the firm posted revenue of about $1.2 billion, and its profits per partner ranked 17th of all firms nationally.

In Monday’s e-mail, Weil said it was taking the action “from a position of strength.” It said that it had zero debt and a fully financed pension plan with more than $500 million in assets. It also noted that its partners did not have long-term compensation guarantees.

By listing those attributes, Weil appeared to be pre-emptively addressing comparisons to Dewey & LeBoeuf, a firm of a similar size that dissolved last year. Dewey collapsed after disappointing profits and a heavy debt load forced it to slash partners’ salaries. Many Dewey partners had multiyear, multimillion-dollar contracts. When they did not get paid their guarantee, they fled, crippling the firm.

Now, a year after Dewey’s demise, most industry specialists view the firm as an outlier, a victim of gross financial mismanagement. Still, some of Dewey’s problems partly derived from the same industry trends facing successful firms like Weil.

Among the main factors hurting law firm profitability is that corporate clients have become stingy. Until recently, pricing pressure barely existed for premium legal services. Decades ago, clients would receive a bill with only a lump sum and the statement “for professional services rendered.”

But today, big corporations, facing pressures of their own, have clamped down on legal expenses. They have beefed up their in-house legal staffs and perform much of the work themselves. They are demanding that for routine assignments like document discovery, work be sent to outsourcing firms and contract lawyers rather than given to expensive associates. And they ask for discounts or capped fees at places like Weil, which charge more than $1,000 an hour for some partners’ work.

Profits per partner — a statistic highlighted annually in the closely watched American Lawyer magazine rankings — have become an unhealthy obsession, Mr. Harper said. Driving this fixation is the frenzied lateral hiring market, in which firms are poaching lawyers with big books of business from rivals. Firms fear that if profitability wanes, they will lose their stars.

“The culture at most of these large law firms is that you must maintain astronomical levels of partner earnings in order to keep your top talent,” Mr. Harper said. “Cutting staff is one way to do that.”

Mr. Wolf of Weil said that while layoffs would help the firm’s profits, the move was not motivated by reducing expenses to enrich partners.

“This is not about cost-cutting but about the future of the firm and strategically positioning us for the next five years,” Mr. Wolf said.

Several industry experts applauded the move. Peter Zeughauser, a law firm consultant, said that many firms were in denial about slack demand, and Weil’s cutbacks could pressure them into getting leaner.

“We have been telling our clients about these economic realities for some time,” Mr. Zeughauser said. “Weil is a bellwether firm, and this will be a real wake-up call.”