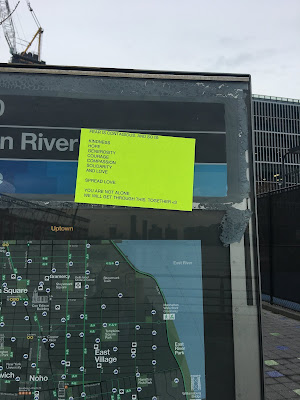 I have made some serious predications as well as speculations as to when the Pandemic of 2020 will end and what will happen in the interim.  None of it positive and few good things will result from the national lockdown and self quarantine that was mandated to varying degrees across the country.

What we did see was a struggle for power and in turn some quiet legislation and laws that have been brought forward that do everything from repress a woman's choice to suppression of voter's rights, the long term affects are yet to be seen as we are still in the early days of some other laws and ordinances that will likely remain long after the virus has left town with the dead in its wake.  It is like the westerns of yesteryear or the science fiction show, Westworld, where the robots seek revenge as this will not be over and we all go back to work all relieved believing the worst is over.

One thing that Americans do is say that "well it's over now" as if yes you are right, that day I was held hostage and in lockdown for 90 days not communicating with others or having any sense of independence or freedom is over now let's get back to partying!  I just went through this in Nashville so few get what it is like to be utterly captive to a situation, to have to pander, cater, and argue to have your point of view heard only to be ignored and be ostracized for it.  Well surprise America you just have and its not easy to 'get over it.'

I had been shuttling back and forth between my home here in Jersey City only spending most of the time getting settled, moving shit back and forth from one storage unit to the next and in between flying back and forth for weeks at a time being gone and then back to simply get some semblance of organization and order to leave again. Apparently all in the time frame when the Corvid virus was just starting to emerge in China and beginning its move west.  And the last time I was in Nashville I skirted a Tornado that destroyed a great part of the city and outlying areas that have not yet recovered and then the virus hit.  It is why I call it the Coronation Virus as it seems to crown you over the head as a soldier for the Emperor to remind the world the power and history of China only instead or warriors they found the ultimate death machine - disease.

America is now facing the use of social media the ultimate distancing machine to plant and sow seeds of discontent in a country already well divided and now conquered by an invisible sword waiting to wreak havoc on the next victim.  Cities and States are seeing themselves at odd with each other in ways that are reminders of another war that was called civil but was anything but.  And the next will be civil unrest when Americans exhausted and frustrated beyond belief finally rise up (or those still healthy) demand answers and some kind of solutions to the increasing walls that are being built everywhere not just along the Mexican border.

Walls are not just physical they are metaphorical and we Americans have them right at the minimum distance required, arms length, to proffer and keep anyone away - a cell phone. That is our instrument of death as we have taken selfies while plunging to our deaths or having bears or other wild life take a  swipe to end that pandemic of environmental destruction all in pursuit of the perfect pic. We have those walking to their deaths before cars and trains rather than walk with caution and of course the ultimate wall - the one of silence- for those times when communion is best shared - the family dinner.  Funny how this virus has now forced everyone to the table and in close quarters to share and bond or not as many are finding risking a virus is better than being home.

Let's be honest why Spain and Italy are high on casualty rates is that they have large families, are highly Catholic and of course live in multi generational communities that are highly intimate when it comes to socialization.  Distant is not a word I would use in either country when it comes to being in your business.  I said to a friend the other day why do you think we have such high rates here in New York and New Jersey area? Shitloads of Irish, Italian and Jewish folks whose idea of a boundary is something to be knocked down not put up when it comes to bonding and building community.  Now not everyone is like that but it does explain why the hot zones are in largely in those tightly knit highly religious communities.  Some of the early came during the high holidays and of course traveling during the holidays themselves meant packing a little something extra to bring home.

And have you been on planes lately? The issue of being packed in has been a issue as a security concern and safety issue so one wonders if that will become one going forward as the airlines look for a bailout.  Maybe some distancing there might not be a bad idea.

So funny I move to a new city not knowing anyone and by the time I was ready to put down roots, go back to work teaching part time or even working retail to meet folks I go under house arrest. Not the first time by choice and by court order so I get it I really do and now I can hit the reset button to see what I really want to do.  The few contacts I had made were slight and only in the new beginnings like seedlings that need light, water and warmth to grow and this spring is starting out cold so where they go I have no clue.  Some I think will thrive and some not.  I know I don't want anyone with drama so already I have ruled out a couple of people with endless family bullshit that is not my issue nor anything I am actually interested in.  I have no baggage in that compartment so while I liked initially meeting this woman less is more moving forward.  There are others who irony I am getting to know in the middle of this and that may be the odd dice thrown that in all things may grow and others that I am not sure as it is all on hold.  So I am holding the cards here that are pledging a vow of silence and when this ends I suspect I will throw it down.  I have a chance to reset this and I want to come away from this nightmare with some concept of hope and belief that at least I can be better for it, the rest of the great unwashed well they need their ears scrubbed as I don't see much optimism or hope there.


Vow of SilenceI decided to take this for the next year, which can be longer or shorter as time passes, but was a decision made as  Corvid virus changed radically how we lived and assimilated in society.What I saw during the pandemic was civilized chaos; Panic buying, hoarding, suspicion, fear and utter disregard and disrespect of each other and the greater good.  In order to distance myself, not physically just socially, I elected to take a vow of silence and speak only when necessary. I found that I can do without idle conversations and spontaneous exchanges, even those of laughter and tears as I spent my time in isolation it taught me what I can and cannot do and more importantly need to do in order to move forward.So I am continuing to socially isolate while being physically present.  It will take immense patience and tolerance on my part, as well as those around me, to enable me to find my voice again.Please understand and acknowledge this vow as a way of coping and of reconciling what I experienced during a time of crisis, as this was not my first but hopefully my last in this lifetime. For me aging gracefully means communicating meaningfully and with that the intent going forward means listening and speaking in the same way.During the pandemic we were told to leave our homes for essential needs and from that I found out that conversation was not essential; However, for professional, emergent or necessary situation I will speak but other than those occasions I will continue to pursue this vow as a way of finding my place and role in the world.