As I have said repeatedly nothing allows for a lack of transparency than a national crisis.  I can look to 9/11 as one of the times when legislations were passed and agency's formed under the guise of protecting us and "keeping us safe" (the watchword of radical conservatives) that robbed us of our civil liberties and enabled if not fostered many abuses of power in our Government.  From this many private industries began to  flourish under the dark of night with that Government check in hand.     One that I often think of  is Eric Prince (brother of the wonderful Secretary of Education Betsy DeVos) and his Blackwater private military force as one example.  Look up the history on that one.

Some of this makes me think of East Germany and how proud another voodoo President, Reagan, was of tearing down that wall but are we not like them soon with the equivalent of Stasi agency aka Facebook as a way of tattling and observing our neighbors violating orders of distancing and walking through closed parks?

**Honestly I go to the JC Government page and read the cranks and ludicrous brainfarts and think wow no wonder Russian bots have such an easy time of it as my neighbors are not only stupid they are really fucking annoying. They can keep their distance regardless**

What is next of course is a form of martial law and Newark decided to step it up to top DiBlasio by labeling three neighborhoods as "hot spots" which it appears one is Rutgers area the other two I don't know but this will be great for property values no doubt and in turn demanding that only one at a time can leave their house if they see anyone they better get back in. No dog walking, no fitness, no hanging out/congregating on the corner. (Well the Barbershop is closed and we all know that import in Black culture!)    At one point I could not tell if this was some odd racist trope and then again Baraka is black so what the fuck?    Funny how that he elected this again to be an issue of personal responsibility and I assume while the National Guard will not be enforcing this the Police will.  Well stop, not frisk however,  as that would be touching and then what?

One of the Baristas here in JC was stopped coming home last week at 10 pm from being out of town and not knowing about the curfew here and was literally at his home and said he was doing that just going home and they watched him enter his home.  He wondered if it had not been his home what then? Yeah what then?  Again we are not apparently to go check on family after work or before going to work as again essential service workers don't work 5am to 8 pm and in turn again is this virus a 9-5 type thing? Because think about it we are all crammed into the stores shopping and exercising at the same time all trying to keep a safe 6ft distance, which right there is impossible unless you put a head count on stores and try to make people again inside same store keep distance it is IMPOSSIBLE.    I went to the Depot with the 50 max count inside. We were all standing in line with about less than foot between us, a woman with kids on scooters and buggies standing there and some oldsters (myself included) and then let in one by one.  This does what exactly?  Then the bakery with a sign on the door that has the request to keep to 10  maximum  and not one person read it when I was in there alone and they stomped in standing cheek to cheek.  True I was alone but that means 9, as in 9 more people not 10 more people so you do the math as they clearly could not.   Reading not fundamental?  Again people here are not only annoying they are stupid.  Then you do see the few with face masks but no gloves hey fuckwit your hands!  Or we can have this: 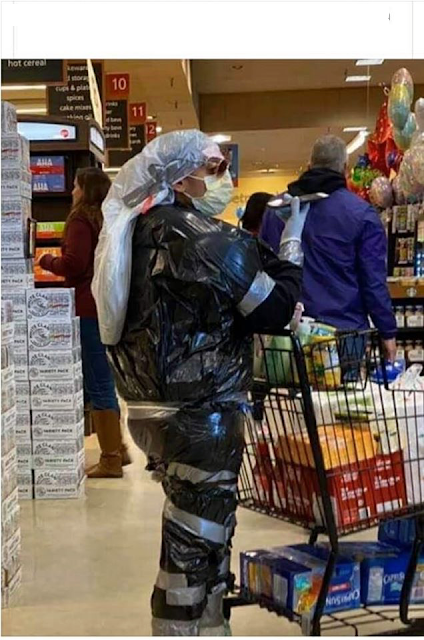 So here is the deal, wear gloves you can dispose of or wash. A face mask you can dispose of or wash, be respectful, stand at a distance when in a queue and have some common sense and courtesy. That last one will be the challenge as well we are fucked up narcissists and the Crazy Dopey Grandpa in Charge reflects America at its best and worst - obsessed with self, money and overall arrogance and ignorance.

Listening to BBC this morning it is clear that we are in this for at least 90 days and we are at about day 10 so there you go.  I have said it will get worse and well that in and of itself will do it but they will close state lines, they are already saying don't go for a drive as apparently just being in your car, getting gas and looking at trees or a beach may be the tipping point.  Again house arrest is coming. Nothing comes without strings and that bill they are pushing through Congress will have that contention, no one will get any money if they leave their homes.   All food and essential will move to contactless delivery and in turn we will either go insane, get really fat or figure out how to work out online.   Or starve as one woman has elected to do to feed her family. But read, become intelligent and active in our fading Democracy,  no fuck that.  Welcome to North Korea!

And again in the dark of the night during curfew the Government of Nation States are passing laws and denying rights as we have learned about another of DeWine of Ohio crazy religious right wing agenda denying abortions as under an "elective" procedure.  More to follow.

So winners in this crisis will be Amazon, irony as Bezos is Crazy Dopey Grandpa nemesis, as he is largely now a delivery essential provider and he owns Whole Foods; Biotech will finally get back up and running after being the target of ire the last year,  the for profit hospitals and medical providers who will realize well we were fucking with you and now we can really fuck you; With that will also open the hands  of course some of the other cronies that CDG deems important, such as hotels and golf courses.  As the elevator that rides up from the Lobby is full, fuck that social distancing as they are hands out, hopefully gloves on, demanding aid and tax breaks to ensure their essential role in restoring America.

Note that again the issues of universal health care, universal income and the actual cost of medical insurance under the ACA  is ignored (let alone that you cannot sign up now whoops!) but that is fine as Private Insurance company's are hard and wet  that has them in Snidely Whiplash  fashion rubbing their mustaches without gloves like they are their dicks without condoms.  Think you have a high deductible and premium now? Wait and the corporate largess that you think gives you this coverage will just step up? Think again.  I mean the company was closed, it was losing money, it was a crisis, it is like your spouse coming up with more excuses why they don't want to have sex but you are fucked.