The late Warren Zevon got the priorities in America he just left out the fucking part.  Who is fucking whom, consensual or not, matters as long as they are rich and/or famous.

Guns are the problem, the money that keeps them firmly in the hands of the 3% who owns them and the Lawyers who ensure that stays that way.  And in turn they fuck over America.

Yesterday after being in a small elementary school I felt better being with little kids who are largely of Immigrant families who have so much hope and promise in their progeny I can only wish them the best.  Then I met the adults in the room.  I left with a raging headache.  The lazy substitute who fit stereotype after stereotype with the supposed experience of teaching "overseas" and in turn lapsed license was sitting there shouting "Check your times charts" while doing nothing to help these adorable 2nd graders who were struggling with division.  It ripped my head apart.  Or the Teacher showing a horrible You Tube video to teach them about the Northwest Native American Tribes.  I did not get the lesson and the kids did not either but during my conversation with the Teacher with regards to student achievement  was on how the district has become centered on low income families. ***Hint Hint*** Poor and and Immigrant.  The Sub also commented that most of "them" (her exact words) seemed to not speak English. Funny the one local kid and who was black, the same color as the sub ,was utterly clueless about simple addition and subtraction so really language was the problem?

I had to walk after school to clear my head through a great park and simply enjoy a cool fall day.  That did not last as the second I came home I turned on the news to hear about two more shootings.  One related to a suspected serial killer in Florida and another mass shooting reminiscent of the DC Sniper case where he and his stepson drove by and randomly targeted and shot people.  So when I saw the California shooter who decided to take out his rage in front of an elementary school.  I thought of those faces so full of promise and excitement learning a new language, learning math, being afraid, confused over just those lessons alone,  I could not imagine them being exposed to this.  Many whose families took great risk to escape just that same type of violence from their own countries.  Shame shame.  America is not much difference as I watch our Democracy erode and our Country divide in ways that will take decades in which to repair, if ever in my lifetime.

America.  Land of the free and the dead.  You can thank the NRA and their fuck buddies in Congress. Money for nothing but the chicks are free.  Money and sex and guns and I think of Roy Moore. Ah America where you fund raise on the accusation you are a pedophile.  America is great again.


The gun numbers: just 3% of American adults own a collective 133m firearms

Facts show owning more than 40 guns is actually fairly common in the United States, and violence falls most heavily on the country’s poorest neighborhoods

You’ve heard the statistics before: Americans have more guns per head than any nation on earth – along with gun violence rates that are dramatically higher than other rich, developed countries.

But these big-picture facts can be misleading. Not every American is packing heat and gun violence is intensely concentrated in small neighbourhoods.

American civilians own at least 265m firearms, which gives Americans the highest rate of per capita firearm ownership in the world, with about one gun for every American.

Yemen comes in a distant second, with about 55 guns for every 100 people, according to data from the 2007 Small Arms Survey.

But surveys show that gun ownership in America is actually highly concentrated. Only 22 to 31% of Americans adults say they personally own a gun.

Rates of personal and household gun ownership appear to have declined over the past decades – roughly two-thirds of Americans today say they live in a gun-free household. By contrast, in the late 1970s, the majority of Americans said they lived in a household with guns.

Most of America’s gun owners have relatively modest collections, with the majority of gun owners having an average of just three guns, and nearly half owning just one or two, according to a 2015 survey by Harvard and Northeastern researchers, which gave the most in-depth estimate of Americans’ current patterns of gun ownerships.

But America’s gun super-owners, have amassed huge collections. Just 3% of American adults own a collective 133m firearms – half of America’s total gun stock. These owners have collections that range from eight to 140 guns, the 2015 study found. Their average collection: 17 guns each.

After the Las Vegas shooting, officials said the killer had 23 guns in his hotel room, and another 19 at home. Some Americans asked, shocked, why one person purchasing so many guns had not set off any red flags.

Part of the answer is that owning more than 40 guns is actually fairly common in the United States: there are an estimated 7.7 million super-owners, which might make it difficult to flag a mass shooter building an arsenal from enthusiastic collectors and gun enthusiasts piling up different kinds of guns for hunting different kinds of game, a selection of handguns for self-defense, and various accessories for the popular, customizable military-style rifles that enthusiasts have compared to lethal Lego sets for grown men.

While Americans have a constitutional right to have a gun in their homes for self defense, an increasing number of Americans also appear to be armed on a regular basis outside their homes. A newly released study found that three million Americans carry loaded handguns with them on a daily basis, and nine million Americans do so on a monthly basis. Most of those choosing to carry are men.

These statistics rely on survey estimates because there’s no official, national count of how many guns Americans own – or even what the grand total of civilian gun ownership is. This is why estimates range from 265m in the 2015 study to above 400m (Yes, gun ownership in America is so private that there’s a 100m gun gap between different estimates).
Gun violence

More than 38,000 Americans were killed with guns last year, according to preliminary statistics from the Centers for Disease Control and Prevention (CDC).

Both gun suicide and gun homicide have risen in recent years, although America’s rates of gun homicide still remains dramatically below what they were in the early 1990s.

Gun suicides make up the majority of gun deaths, more than 20,000 each year. But violent gun injuries represent an even larger toll: more than 60,000 people are shot each year and survive, according to CDC estimates.

In 2015, the most recent year with detailed data on fatal gun deaths, there were more than 36,000 overall firearm deaths, including 22,000 gun suicides and 13,000 gun homicides. That same year, according to The Counted, a Guardian project tracking police killings, more than 1,000 Americans were shot to death by the police.

More than 700 gun murders each year are related to domestic violence. An Associated Press analysis of official crime data between 2006 and 2014 found an average of 760 Americans were killed with guns each year by spouses, former spouses, or dating partners.

The vast majority of these domestic violence victims were women, and about 75% were the current wives or girlfriends of the people who killed them. These numbers, based on murders that were reported to the FBI as related to domestic violence, are likely an undercount of the total, and do not include children or bystanders killed during a domestic violence shooting.

There are also stark racial, economic and geographic disparities in the toll of America’s gun violence epidemic. Experts say violence is a kind of regressive tax, falling most heavily on the country’s poorest neighborhoods and most vulnerable people.

More than 25% of America’s gun homicides in 2015 happened across census blocks that contain just 1.5% of the country’s total population.

While gun control advocates often say it is unacceptable that Americans overall are “25 times more likely to be murdered with a gun than people in other developed countries”, people who live in these neighborhood areas face an average gun homicide rate about 400 times higher than the rate across those high-income countries.

More than half of America’s gun homicides were clustered in just 127 cities and towns, which together have less than a quarter of the nation’s population.

Researchers have found that America’s gun violence is concentrated not just geographically, but also within social networks.

Some researchers suggest that the risk of violent victimisation may spread from person to person like a virus, meaning that particular networks of people, not whole neighborhoods or racial or other demographic groups, are most at risk.

In Oakland, California, analysts found that networks of just 1,000 to 1,200 high-risk people, about .3% of Oakland’s population, were involved in about 60% of the city’s murders.

In Chicago, analysts working with police department data found that, over a six-year period, 70% of non-fatal shootings and 46% of gun homicides happened within a sprawling social network that included just 6% of Chicago’s total population. 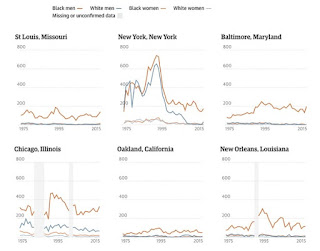