I had to leave Seattle for reasons I have explained in the last few blog posts but it was also becoming increasingly expensive in which to live and work.  The dental reconstruction that while expensive hre is nowhere near the costs there where it would be the equivalent of a small luxury car.  The wages for Substitutes were 127 dollars a day and I was at 150 a day with a buy in to cheaper health care. We were unionized and growing up most jobs including Retail, Waitress among other working class gigs from Boeing Manufacturer to Bus Driver were all well represented by Unions.  Then tech arrived.

What had been a largely middle class economy, insular and well preserved due to Boeing, Fishing and Timber, Microsoft changed the equation. Then came Amazon and that is a hell of a river in which to fight upstream.  It has made the city a corporate one in every sense of the word with about 85% of the city real estate owned and/or managed by Amazon.  With that comes a wage war and class war and turf battle that like all things Amazon, they win.  Unions were already a thing of the past, Boeing had extorted money from the State to retain the little manufacturing it had.   Timber was long gone and smaller in scope and scale and Microsoft was and always be what it is but they used to their advantage the idea of stock options, contract 1099 employees and the infamous H1B1 visas that rule in the tech industry.  It should not be shocking that the land of tech and Silicon Valley would be the rival to Seattle when it comes to income inequity.

When I left San Francisco it was on the cusp of the real estate boondoggle and many were in retreat. I saw then the writing on the wall with wealthy tech to the South buying property that was inflated and indebted up north with ease. They had the cash and the banks needed it.  It shows now with the mass gentrification and exodus of those who once made San Francisco diverse less so.   California has always been a State of confusion when it comes to labor, relying on Immigrants or undocumented workers to pick up the heavy lifting, the film industry for the glamour and the idolization of Tech which truly makes the Golden State gold.

I live in Tennessee, a right to work state.  The City of Nashville is desperate to be Atlanta as that is closer in scope and scale.  I have no idea what goes on in Atlanta and I doubt anyone in Nashville does either but I do know Tyler Perry has his film industry located there so good enough!  But like all things in the South they are obsessed with money.   The Chamber of Commerce endlessly repeats the quote or bizarre statement that 100 people a day here as some proclimation that wages can be low as there is tons of competition and in turn people who are willing to work for the federal minimum.   And as the hospitality trade rules that is the bare minimum.

The City of Seattle to try to circumvent this changed the minimum wage.   In 2015 the wage ordinance went into effect with the idea of gradually increasing wages by January 1, 2018 to $15/hour and higher with adjustments for inflation and some exceptions.
And while there are exceptions for said wage it was fought vigorously by one of the largest most well known Restauranteur, Tom Douglas, as a "job killer."  Funny it now seems insufficient given the current state of affairs.  The money from legal marijuana has not been quite the beamoth that it is in Colorado and the revenue generated at this time is about 730 million out of the 42 million needed to run the State.  And that may be due to any number of reasons but Seattle does not quite market nor produce nor even tax  the weed in the same way.  Colorado is successfully using the funds to improve schools and  while Seattle now has record number of homeless leading to a crisis point and in turn the amount of homeless children attending public schools in Seattle is equivalent to the same number in New York.

Seattle has always been the bookend to San Francisco and now it can truly say it is the biggest of the two, a dream that Nashville aspires to as well.  Our local Business Journal documents each wealthy zip code and area of town with residents net worth as if they are documenting a study on economics.  It is hilarious if it wasn't so pathetic.  They do this with each construction project and announcement by any business looking to build or add a facility here.  I have watched people repeatedly tell me the 100 people a day nonsense, watched multi family units being built at record pace with record rents not commensurate with wages, and in turn more people pushed to the outlying areas relying on cars to transport them to work in the city core adding further congestion to already outdated highways.  There is a desperation here that I find tragic and worrisome if this all doesn't come to fruition. There is just something not right about most of the development as little centers on jobs that demand degrees, education and experience all needed qualities for wage growth.  Seattle gets that and their obsession with the public schools and being well educated shows in the numbers, here not so much.  Though "bless 'em" they try.

But careful what you wish for.  Urban sprawl, low wages, lack of adequate wages, infrastructure issues and of course the real issue - racial strife - will only back door in what neither Seattle nor San Francisco has had to deal with when it comes to race and hence that is also why its rich bitch.  And while Atlanta and Miami may be more diverse than the other cities on the map defining top and bottom earners, there is more to the story that would show a clear divide among race and class much like here.

In short, the rich are getting richer in Seattle. The top 20 percent of income earners took home more than half the city’s total income — and the richest saw a $40,000 pay raise in 2016.

Some records you don’t want to break.

In 2016, Seattle hit an all-time high for a commonly used measure of income inequality, known as the Gini index. And if you’re worried about Seattle turning into the next San Francisco, this won’t set your mind at ease: Last year marks the first time we’ve matched the City by the Bay for this particular statistic.

The U.S. Census Bureau has been calculating the Gini index for every place in the nation since 2006. The index is expressed as a number from 0 to 100, with a higher number indicating a more unequal distribution of household incomes.

For example, a place with perfect equality — if such a place existed — would score 0, meaning every household had the exact same income. Conversely, an index of 100 would mean total inequality — one household earned all the income.

Seattle’s Gini index had always been between 48 and 49, without much change from year to year. And, in fact, it had seemed to be trending slightly downward since 2011.

This also marks the first time Seattle had a Gini index higher than 50. Income inequality here is now on par with San Francisco, with an index of 50.3 last year. 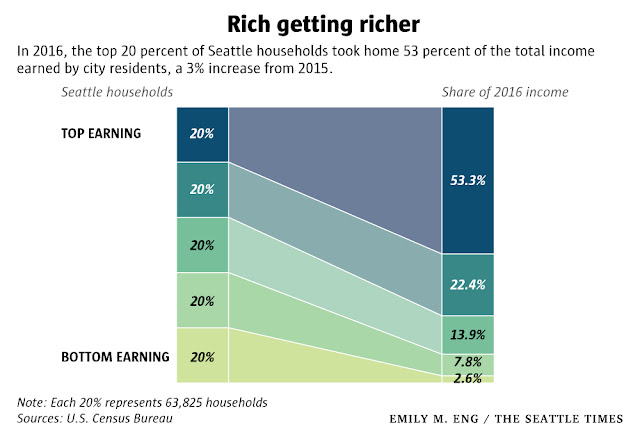 What’s behind the hike in Seattle’s Gini index last year? The answer will surprise no one: The rich got richer.

Meanwhile, the bottom 20 percent of households, along with households in the middle, saw their share of the total income decline.

This may sound like the poor got poorer — or, for that matter, that Seattle’s move toward a $15 minimum wage isn’t helping those households at the bottom. But that’s not what the data show. Household incomes at the bottom remained unchanged last year. There were also slight increases in income for middle-earning households.

The reason income inequality got worse is that the gains made by high-income households were so big that the gap between the rich and everyone else widened.

The situation is hardly unique to Seattle.

“What you’re seeing in Seattle is consistent with what we have seen in this country for virtually the entire period since the 1970s,” said Heidi Shierholz, policy director for the Washington, D.C.-based Economic Policy Institute, a pro-labor think tank.

In the post-World War II period, income inequality was declining. But at some point in the 1970s, wage stagnation set in for lower- and middle-income workers, while the top tier of earners began pulling away from everyone else. 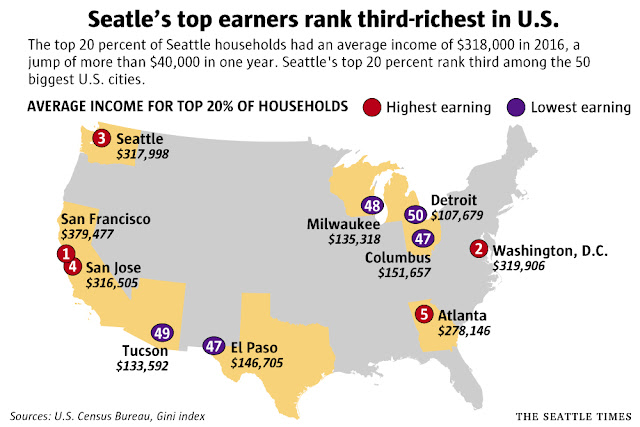 Economists point to a variety of reasons for this. Shierholz believes none is more significant than the decline of unions, and not just because union jobs have higher pay and better benefits.

“When you have a high share of workers who are unionized, that also helps nonunion workers,” she said. “If an employer knows their workers could go to a union job and get better wages, they actually have to improve the wages in their own workplace.”

Shierholz said that improving labor laws and standards, and better enforcement of them, is key to reducing income inequality nationally. Seattle, she noted, has taken one such step at the municipal level by increasing the minimum wage.

She also applauds the city’s ongoing attempt to institute an income tax on high earners. “We’ve seen this rising inequality in pretax income,” Shierholz said, “but as the tax code has become less progressive, it’s increased even further the post-tax inequality.”

Legislation creating the tax was passed by the City Council in July, but several lawsuits have been filed to block its enactment.

With last year’s big increase in its Gini index, Seattle now ranks 18th for income inequality among the 50 largest U.S. cities. That’s a big jump from 2015, when we ranked 31st.

Even so, we’re still far behind the city with the worst income inequality, and a Gini index of 57.5: Miami.