The first big win for plaintiffs in a tobacco lawsuit occurred in February 2000, when a California jury ordered Philip Morris to pay $51.5 million to a California smoker with inoperable lung cancer. Around this time, more than 40 states sued the tobacco companies under state consumer protection and antitrust laws. Dec 30, 2015

Big Pharma along with the AMA are leading the fight against any attempt to federalize Medical Care and of course that means those two federal Medical plans - Medicare and Medicaid - which are already facing deep cuts and reductions will offer even less (Medicare Plan B anyone) than they currently do.  And the axe to the ACA will kill anything left and by kill and anything I mean those needing care - the Death Panels have finally arrived that the Republicans kept threatening us about.

But when even deep red states like Ohio and Missouri are stepping up to sue Big Pharma for their role in the the rising tides of addiction.  But as we have come to know that like all Industrial Complexes the money that flows from that river runs wide and deep.

The reality is that this will end kickbacks to Doctors which harms their incomes, then we Hospitals that also benefit from Big Pharma as they simply direct their Physicians to shove a pill down their throat and kick them out, the Generic drug trade,  drug regulations,  the middle man who handle and disburse drugs to Pharmacies (Express Scripts), and lastly treatment centers.  And by treatment centers they are largely run by private industry and in turn have few regulations and actual successes that are documented and in turn validated as such.

This article about the "Sober Houses" that exist in Florida is just another horror story of how an entire town is akin to a Prison one where the dependency upon the industry is eating itself from within,  If you have ever read the late NYT writer, David Carr's book The Night of the Gun, you would know about the pull of addiction; in which he also discusses his own experience in said living environments and what they do or don't with regards to addiction therapy and treatment.

But even Prisons are realizing that treatment versus punishment may be the solution to their enrollment numbers which is ironic as the other drug wars is being ratcheted up by Forrest Trump.

Addiction treatment is another notch on the mental health train and once again another Police Shooting of a woman in a transitional home with a history of problems was killed by Police for brandishing a knife.  I will write about this incident and discuss my thoughts as this was in Seattle and again shows that regardless of the political climate of the area there are deep divides with regards to color, class and in turn care.

Trump brandishes his sword that is on top of his head  and calls the House version of  the ACA "mean" while then promising to rein in the promises of drug costs while simultaneously presenting a budget that provides no funds for means that could circumvent addiction issues - such as jobs, housing, education and wages that are commensurate with the cost of living.  Gee Make America Great Again?  Or make it "Mean?"  I go with the latter. 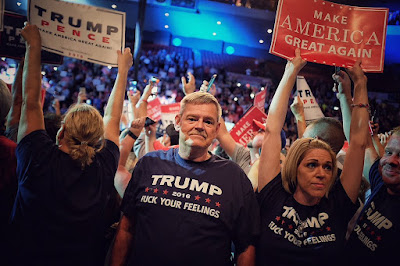 Helen Fabick was an honors student who in February 2014 was supposed to attend a daddy-daughter dance at her high school.

Instead, her father found the 17-year-old dead in her bed.

“If this sounds like a nightmare, it has definitely been a nightmare for our family,” Helen’s mother, Jammie Fabick, said during a news conference Wednesday with Missouri Attorney General Josh Hawley. “It’s something no parent should ever have to do, to bury her own child, to something so senseless.”

Fabick and Hawley stood together in St. Louis as the state’s top lawyer announced he was suing three pharmaceutical giants he claims are responsible for a “coordinated campaign of fraud and deception” that has led to Missouri’s current opioid crisis.

The lawsuit, Hawley said, will seek “hundreds of millions of dollars” in damages and civil penalties from Endo Pharmaceuticals, Purdue Pharma and Janssen Pharmaceuticals, which is owned by Johnson & Johnson, reported the Associated Press.

He said the companies have used fraudulent science to mislead patients on the addictive risks of opioids and “profited from the suffering of Missourians.”

“They used bogus front organizations and fake research; they used fraudulent advertising and deceptive trade practices,” Hawley said in prepared remarks, according to Reuters. “And they repeatedly lied about the true risks of the drugs they sold.”

In Missouri in 2015, thousands of people were hospitalized from non-heroin opioid overdoses and about 500 people died, according to the AP.

Yet it’s the only state in the country with no prescription drug monitoring system, a database that experts have said is a crucial step to curbing addiction and overdoses.

Proposals have languished in the legislature for half a dozen sessions.

At the news conference Wednesday, Hawley said Missouri lawmakers “should act to pass a prescription drug monitoring program” as just one of several efforts to “address what is a national epidemic but one that has had serious consequences here in the state of Missouri,” reported the AP.

With Hawley’s lawsuit, Missouri becomes the third state to legally challenge the pharmaceutical industry over the current opioid epidemic.

In 2015, Mississippi sued several drug companies and just last month, Ohio filed its own lawsuit against five pharmaceutical groups. Purdue, Endo and Johnson & Johnson were cited in both, reported Reuters.

Endo told the Kansas City Star it would not comment on pending litigation, but Stephen Mock, the vice president for investor relations and corporate affairs wrote in an email that the company’s “top priorities include patient safety and ensuring that patients with chronic pain have access to safe and effective therapeutic options.”

A spokesman for Purdue vigorously denied the allegations, reported the Star, but said the company shares “the attorney general’s concerns about the opioid crisis and we are committed to working collaboratively to find solutions.”

A Janssen spokeswoman told the Star that the company had “acted appropriately, responsibly and in the best interests of patients regarding our opioid pain medications, which are FDA-approved and carry FDA-mandated warnings about the known risks of the medications on every product label.”

In March, Sen. Claire McCaskill (D-Mo.) launched an investigation into five top opioid manufacturers and their alleged role in the deaths of more than 200,000 people since 2000, as The Washington Post previously reported. Purdue and Janssen were on her list of companies from whom she demanded information.

At the news conference Wednesday with the attorney general, Fabick said she wasn’t educated when her daughter died in 2014.

“I didn’t see any of the exact signs (of drug abuse),” Fabick said, according to the St. Louis Post-Dispatch. “You never know when it’s going to be your last hug.”
Posted by Green Goddess at 9:11:00 AM