I find it reassuring to know that idiocy in the Trump White House is not confined to just the house itself it is throughout the administration. It is like an STD that you know you have to contact all your former sexual partners but it is a call you hate to make but you know if you don't you put others at risk. And that is America right now, Trump's STD. Eventually everyone will figure it out and get treated but in the meantime the symptoms and disease spreads.

Ben Carson, Doctor Ben Carson. I have long said that it only takes persistence to get a Medical Degree not necessarily intelligence. Dr. Carson proves this.

Dr. Carson is the only man of color in the Administration and ironically or intentionally in charge of "public" housing which of he has no personal experience nor skill set in running a large Governmental department but hey never say never. I call him the house Negro which I think Malcolm X explained in this piece quite appropriately. How is he doing? Hanging with Frederick Douglass I guess. I bet they love sitting in the rose garden drinking lemonade. (Beyonce that one is for you!) 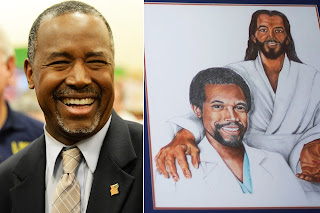 Ben Carson told HUD staff he could zap their brains into reciting whole books read 60 years ago. What?

By Ben Guarino
The Washington Post
March 7 at 5:02 AM

In remarks to his new staff, new Housing and Urban Development Secretary Ben Carson referred to slaves as 'immigrants' and said they came to the U.S. in 'the bottom of slaves ships' for better opportunities.

By now, everyone’s aware that Ben Carson likened slaves to immigrants during a staff speech Monday to mark his first full week as Secretary of Housing and Urban Development. The comparison did not play nicely on social media. (On Twitter, actor Samuel L. Jackson announced his disapproval with a phrase that cannot be reprinted here.)** we all know this as there are no damn snakes on the motherfucking plane. Sadly we cannot say that about the White House

But Carson’s remarks about slavery were not his only statements to receive scrutiny.

As a surgeon at Johns Hopkins Hospital in 1987, Carson famously separated infant twins conjoined at the head. But on Monday, he told a factually wrong parable about the brain. Specifically, Carson said, the brain was incapable of forgetting and could be electrically stimulated into perfect recall — a statement that, even though made by one of the most famous former neurosurgeons alive, was far more fiction than science.

It came in an anecdote meant to motivate the federal employees, a bit Carson developed on public speaking circuit. He described the brain’s surprising power as a way to show the audience that they were more capable than they believed.

Except his description did not hit the mark. “It remembers everything you’ve ever seen. Everything you’ve ever heard. I could take the oldest person here, make a little hole right here on the side of the head,” Carson said, circling his left temple with a finger, “and put some depth electrodes into their hippocampus and stimulate. And they would be able to recite back to you, verbatim, a book they read 60 years ago. It’s all there. It doesn’t go away. You just have to learn how to recall it.”

He went on: “It can process more than 2 million bits of information per second. You can’t overload it. Have you ever heard people say, ‘Don’t do all that, you’ll overload your brain.’ You can’t overload the human brain. If you learned one new fact every second, it would take you more than 3 million years to challenge the capacity of your brain.”

The insinuation that Carson could zap a patient into reciting, from cover to cover, a book read in 1957 was not true, experts said.

“Using electrodes placed in the human brain to implant memories or to recall forgotten memories is simply not possible at this time,” Darin Dougherty, a psychiatrist and the director of Massachusetts General Hospital’s neurotherapeutics division, told Gizmodo.

Dan Simons, a University of Illinois psychologist who studies attention and memory, told Wired that Carson’s claim was “utter nonsense.” Simons said it failed on nearly all counts: Humans cannot recall large swaths of text unless memorized for that purpose. Doctors cannot force patients to remember anything in crystal detail, even with deep brain stimulation. No human brain holds within it “a perfect and permanent record of our experiences,” the psychologist said.

Exactly where the brain holds memories is a question with century-old roots, and is likely a function of the memory’s age. The hippocampus is thought to play a part in long-term recall, but does not itself store old memories. And though recent studies indicate that electrically stimulating the hippocampus can boost performance on memory tests, this was not the same as triggering decades-old recollections.

(A technique called optogenetics has allowed scientists to implant false memories by shining light into altered brain cells via fiber optic cable. The same technique can restore memories in mice suffering from a chemically-induced approximation of amnesia. But the amnesiac brains on the receiving end of the fiber optic cable must belong to mice. And none of their lost mouse memories were ancient, or so detailed as a novel.)

This was not the first time Carson has made similar claims. The brain-as-perfect-recall-device also appeared during a speech Carson gave in 2011, at conference called the Celebration of Creation held by the Adventist News Network. In his book “One Nation,” Carson repeated the idea that he could stimulate an 85-year-old man into reciting an entire book that the man read in his twenties.

Carson’s public opinions have not always aligned with his famous credentials in medicine. He has been criticized in the past for raising doubts about vaccine safety. He called climate change “irrelevant” in a November 2014 interview.

And Carson once proposed that the Old Testament prophet Joseph built the Great Pyramids of Giza to store grain, as The Post reported in 2015, based on the doctor’s interpretation of the Book of Genesis when, in fact, the ancient Egyptians constructed the pyramids, which are not hollow, for pharaohs to use as royal tombs.
Posted by Green Goddess at 7:02:00 AM