The Cards are dealt 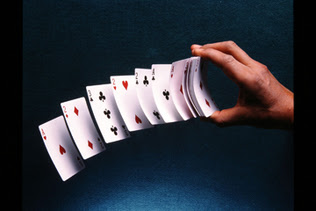 I found this in San Diego City Beat - the date 2008. Has anything really changed. The card deck is stacked against you the moment the Officer stops, speaks, frisk, places you into custody - the precursor to arrest which few understand that distinction. Once you are in the system, regardless of guilt or innocence expect that the house wins. That is the rule in Vegas and it is the rule in the criminal justice system.

Joseph Kownacki is used to having the odds stacked against him.

The central misdemeanor unit supervisor of the San Diego County Public Defender’s office and a 20-year veteran of his department, Kownacki knows his counterparts in the county District Attorney’s office will always win more cases and be lavished with more praise. It’s part of the game, which is why Kownacki refers to his office as the Padres and the other team as the Yankees.

He just doesn’t think the odds should be stacked so high.

“In the 2003-04 fiscal year, we were the only department in the county to have layoffs and demotions, and it looks like that will be happening again this year,” said Kownacki, who’s also head of the county public defenders’ labor union. “Over the last 10 years, we’ve lost 25 positions. We don’t have enough staffing and have a zero-based budgeted office—if someone goes sick, there’s no one to replace him.

“In the meantime,” he adds, “the D.A.’s office’s budget has gone way up, and they’ve created all kinds of new positions—despite the fact that crime has dropped significantly for the past 16 years.”

Statistics show reported crimes steadily decreasing in the county since record-high levels in 1992. Violent crime—such as murder, rape and aggravated assault—hit a 25-year low in 2007, while property crime dropped to its second-lowest level since 1983, according a report by the San Diego Association of Governments.

Nevertheless, funding for the D.A.’s office has steadily increased since 1988, when the Public Defender’s office went from being a largely outsourced to an in-house department. Over a 20-year period, the D.A.’s budget rose from $20 million to $150 million—an increase of 750 percent. The Public Defender’s budget rose from $19 million to just $56 million over that same period.

The disparity has translated to a growing imbalance between the ability of indigent criminal defendants to fight the charges against them and the power of prosecutors looking to put them in jail. As a result, say Kownacki and other county public defenders, poor defendants are routinely receiving longer sentences than their crimes warranted—or being put away for crimes they never committed.

“Politicians want to show that they’re tough on crime,” said Mel Epley, a deputy public defender assigned to the office’s felony team Downtown. “What they don’t realize is there’s people being overcharged, people who are entitled to an adequate defense to overcome those cases where they’re truly innocent. That’s hard to do when we’re so overburdened. No one seems to care until a family member or friend or someone they care about is charged and find that the system is stacked against them.

“Right now I have about 36 cases to look out for, three of which are what we call Class-5 felony cases that involve murder or attempted murder,” he said. “My caseload for the year is about 180 so far. The American Bar Association recommends that attorneys not handle more than 150 cases a year to give them time to work on them. The vast majority of our cases do settle, but that doesn’t mean we had the time to make sure the appropriate charges were filed against the defendants.”

Epley and Kownacki point out that while funding for prosecutors has greatly increased, the number of cases filed by the D.A.’s office has remained virtually the same—about 28,000 misdemeanor cases and 18,000 felony cases—every year since 1988. What all that extra money has done is allow prosecutors to spend more money per case, and, thus, given them the freedom to heap more—sometimes unnecessarily more—criminal charges on the accused.

“It’s routine,” Epley said. “Anything that’s possible for the prosecutors to throw out there, they do. A good example is we’ll find a person who’s been charged with having property that’s been recently stolen, maybe a laptop computer, and there’s absolutely no evidence to connect this person to where it was stolen from. Instead of charging the defendant with receiving stolen property, prosecutors will charge him with residential burglary, as well.

“People can be charged with attempted murder for getting into a fight and someone is injured, when actually the charge should be assault with an injury. Of course, the punishment and stigma of being charged with attempted murder is much more severe. Another thing I see prosecutors doing is that when a person with a prior conviction is charged with burglary, they’ll be charged with a Code 459, which is burglary, and a Code 460, which is residential burglary. The prosecutor’s pleadings will show them as two distinct strikes, which puts the defendant in the category where, if they plead to the charges, they’re looking at 25 [years] to life.”

Calls to the D.A.’s office for comment were routed to spokesperson Steve Walker, who referred them to Ray Fernandez, deputy chief administrative officer of the San Diego County Public Safety Group. Fernandez said the issue is a labor matter, referring to Kownacki’s role as union president, and declined comment.

Steven Carroll, who heads the Public Defender’s office, flatly rejected the contention that understaffing in his office puts indigent defendants in jeopardy.

“The county has let me know they really don’t want to respond to this issue and don’t want me to respond to this issue,” Carroll said. “I don’t share [Kownacki’s] concerns. My approach to the funding issue is to take a look at the caseloads in the various units we have. I do this about every two months and see what the workflow is, measure that against what workloads people should be able to accomplish and make a decision on that. I’m adequately staffed. I’m certainly not overstaffed, but I believe I’m appropriately staffed for the kind of work I’m doing.”

Every San Diego prosecutor is given a laptop computer and cell phone upon hire. Prosecutors are assigned a secretary and paralegal for every eight cases they handle. The paralegals are broken up into teams of two to three, sharing the responsibilities of coordinating schedules and writing up pleadings and motions and following up on minor tasks. It’s difficult to quantify how many cases any of the 323 criminal prosecutors have open at any given time because cases are divided into categories: One prosecutor carries the case through the arraignment process before handling it off to another prosecutor who carries it through the pre-trial hearings and onward through the course of the case.

The county’s 159 criminal public defenders (another 23 handle cases brought by the San Diego City Attorney’s office) use their own cell phones and share exactly one laptop between them—and only when in trial. They have no paralegals but instead draw from a pool of nine attorneys Downtown to assist them—when available. Each defender handles a caseload of between 35 to 45 cases, which they work through from beginning to end: calling witnesses, coordinating witness schedules, issuing subpoenas and researching and writing motions. When sick or in trial, no one is available to handle their other cases. They have no other help other than interns and volunteers, whom Kownacki refers to as “the best interns and volunteers in the world.”

“I see attorneys here coming down with adverse health effects from the stress,” Kownacki said. “They get no breaks. I’ve got kids here—young men and women—working 50- to 60-hour weeks.”

Kownacki said the brutal workload has caused morale to plummet, with attorneys quitting for less stressful jobs in the private sector or, tellingly, with the D.A.’s office. Inevitably, it’s also stirred resentment toward prosecutors.

“It’s amazing to me that our attorneys carry 30 to 50 cases and their trial deputies start complaining when handling more than six cases,” says Deputy Public Defender Troy Britt.

Again and again, the defenders speak of the easy life and luxuries enjoyed by their counterparts, of the D.A.’s comfortable digs in the Hall of Justice Downtown or at the new facility in the South Bay with its spacious offices and work-out room. The Public Defender’s own headquarters, Suite 500 of a dilapidated 1920s-era building at 233 A St., is a cramped and dusty affair resembling a telemarketing boiler room. The attorneys know the building isn’t up to seismic code, and so they dive under their desks at the slightest earthquake. It has no workout room.

“Our workout is hauling files back and forth from the file room,” Epley grumbled.

One might ask how the perennially cash-strapped county can afford to be so magnanimous toward the D.A., and the answer is it can’t. Like all California counties, San Diego receives revenue from Prop. 172, a half-cent sales tax passed in 1993 and earmarked solely for public-safety spending. The proposition has generated $27 billion since its passage, about $1.8 billion of which was funneled to the county in the past 10 years for use by the D.A.’s office and Sheriff’s Department. The Public Defender’s office doesn’t receive Prop. 172 funds.

Nor is it eligible for any of the many state and national public grants for which the county regularly applies on behalf of the D.A.

“That money is given [to] them year after year without any assessment of need,” Kownacki said. “The spigot is on and it’s never shut off. That’s the problem with legislation by the masses.”