Much like the notion of what defines the middle class also affects the definition of poor. We equate poor with color, one color specifically - black.

Well to understand the actual percentage of black people who are poor, not including African immigrants classified as "black" or literally African Americans we need to actually look at Census data that includes yes, saying it, segregated populations of those native born American black identifying individuals, their income and the relationship to that income to where they live and the poverty level for that area. This is opposed to the much maligned Federal standard of poverty who pretty much has anyone making below a threshold of income as "poor."

We know that to be poor in San Francisco being below 75K is pushing the boundaries for a family of four but not in you are single and working with health care covered and living in reasonable and affordable housing (which is now near to impossible but hey let's pretend). This is different for a family of four making the same in Cleveland or in fact Minnesota which has an amazing standard middle class threshold and well worth looking at for its budget surplus.

If you are curious how this works, CNN has a cost per living by state calculator and you can play with that all day!

But when it comes to understanding who is poor we often equate that with color of skin not color of money.

I live in a city largely white with displaced people of color being moved further into the hinterlands daily. A young man in the class thought the photo of Mt. Rainier was Everest as he had "never been there." While meanwhile if we all walked out to the main street in front of the school, Rainier Avenue (irony) you could see Rainier to the south. There is so much wrong there I am not sure what to say but moving on. So one would think the larger homeless population would be faces of color. Yes I do have to Latino men living in the park by my house and there are a few men of color I see pushing carts nearby but the largest faces of indigent homeless - white.

Now why the come here is under some weird notion that we have tons of social services that exceed the norm being we are "liberal." We have legal pot. We have a higher minimum wage. It is pretty here. It has jobs here. It is whatever bullshit and PR you read about. And it is overflowing with poor. We have one public hospital, Harborview and it is not called Harborzoo for nothing. We have truly garbage public schools, I know this personally. We have no more housing for the poor then we do the homeless but we have legal encampments called "Nicklesvilles" after a Mayor in a form of derision which is now, irony again, some type of honor as the current Mayor wants more of them. And yes you can see Mt. Rainier in the horizon and the Cascades and Olympics on both sides so we are a pretty city. But we have massive problems with the "poor."

I think this article from the Atlantic cites a recent study that best describes how the word poor is a euphemism for black. And the reality is that with that comes the idea that blacks are lazy and rely on social services for income. And in reality they are the least to receive them. That also makes sense in proportion to actual population as the article neglects to mention. You can't have more people taking more when they don't exist.

But in reality we like to categorize and believe our unicorn mythology that working hard is the key to the door with the ladder which you can climb to the top. Of course that again is a matter of perception and an ingrained racism that we have yet to truly address. And if those in the know knew that in fact it was white people who were the most affected by poverty then see that SNAP program and other social safety nets get expanded. But that would require again actual effort to know and give a shit. Two things in America we are in short supply of - knowledge and caring.

To the Media, 'Black' Is Too Often Shorthand for 'Poor'.
By Joe Pinsker
....
What does poverty look like in America?

Judging by how it's portrayed in the media, it looks black.

That's the conclusion of a new study by Bas W. van Doorn, a professor of political science at the College of Wooster, in Ohio, which examined 474 stories about poverty published in Time, Newsweek, and U.S. News and World Report between 1992 and 2010. In the images that ran alongside those stories in print, black people were overrepresented, appearing in a little more than half of the images, even though they made up only a quarter of people below the poverty line during that time span. Hispanic people, who account for 23 percent of America's poor, were significantly under-represented in the images, appearing in 13.7 percent of them.


Those discrepancies are striking, and, as van Doorn points out, sadly predictable, neatly mirroring the stereotypes of Americans more generally. In 1991, a survey found that Americans’ median guess at how many of the country’s poor people were black was 50 percent, though at the time the actual figure was 29 percent. Ten years later, another poll found that 41 percent of respondents overestimated the percentage by at least a factor of two. (In 2013, 23.5 percent of America’s poor were black.) 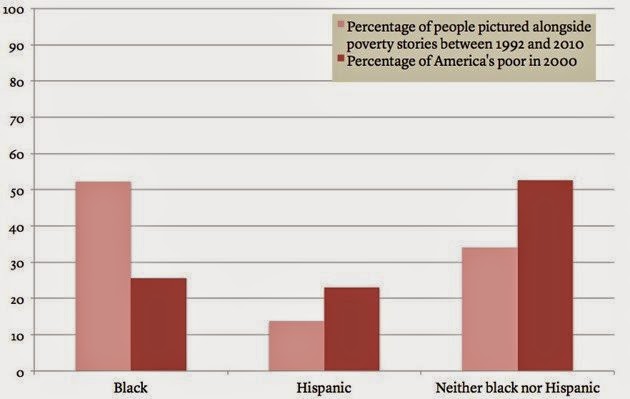 But it's not just that poor people are imagined to be black—they're also commonly thought of as lazy. In 2008, only 37.6 percent of Americans considered black people hardworking, whereas 60.9 percent said the same of Hispanic people. For white people and Asian people, these percentages were 58.6 and 64.5, respectively. "To the extent that photo editors share these stereotypes," van Doorn writes, "it is no surprise that African Americans are over- and Hispanics are under-represented among the pictured poor."

One potential hole in van Doorn's study is that he analyzed weekly news magazines published in print, which makes sense when approaching the question for 1992, but made less sense by 2010. On top of that, Time and Newsweek's print staffs (likely a relatively old-school bunch) might not be reflective of today's entire media world. Still, some of the discrepancies between print publications' "pictured poor" and reality are so large—38 percent of welfare recipients are black, yet 80 percent of the people pictured alongside Newsweek's stories on welfare were black—that it's hard to imagine that digital publications would have shaken the habit entirely.

Van Doorn is interested in the relationships between the adjectives “poor,” “black,” and “lazy,” arguing in his paper that they must have something to do with why some Americans are opposed to generous welfare programs. A 1999 book that he leans on heavily, Why Americans Hate Welfare by Martin Gilens, made the case that supporting impoverished adults with cash payouts is unpopular because white voters see such efforts as primarily benefitting black people—whom they believe to be lazy and thus undeserving. If the media's portrayal of poverty were to reflect its actual diversity, perhaps voters would view social welfare programs more favorably. But that wouldn't change the underlying phenomenon: that many still believe skin color says something about work ethic.