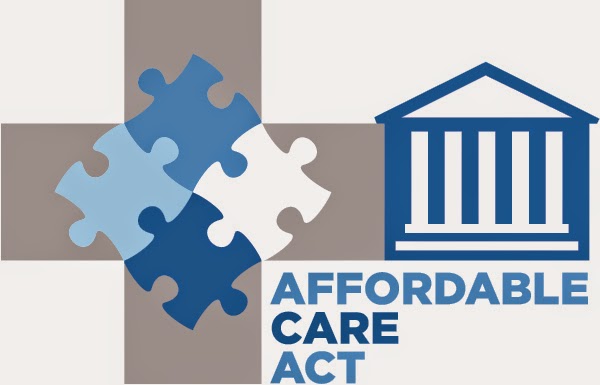 The Affordable Care Act is a tax.  We are required to carry medical insurance, those who cannot afford the premiums can apply for a credit which to offset the costs. At annual tax filing time those credits will be matched with income verification and if in fact the credit provided was too great to subscribe to the policy, the tax payer will be required to repay the amount as an "advancement" against the subsidy.

Funny, before Affordable care I could afford an individual policy.  Since that time the same policy with now higher deductibles and oddly more restrictions is now less affordable. I use the credits but as my income is flexible I have no idea if in fact some of my subsidy will need to be repaid as I base my income on an average.  This will be the first year where I will find out what the what is.  It may be actually better for me to set up a savings account for emergency medical needs and in turn pay a more nominal penalty for not enrolling.  Time and money will tell.

But the nice thing is that regardless of having insurance, coverage and need are dependent variables so even if I need medical care I should be able to get it and of course be billed as appropriate. The problem is and has been that non-insured patients were and are billed at higher rates.  And what is even more disturbing is that Medicare and Medicaid have ceilings and of course each insurance company does so once again who is covering whom can lead to other discrepancies in billing.  And add to that where treatment is sought that too can affect overall costs.  Medical billing is a miasma of bullshit and obfuscation.  So when you are poor and cannot afford treatment and aggressive pursuit of billing documentation often hospitals send you to collections and they in turn send it to the courts and garner a summary judgment to garnishee wages to secure the debt.

Then the light at the end of the tunnel.  Maybe this is a start in the right direction.

Under the rules, nonprofit hospitals must now offer discounts, free care or other financial assistance to certain needy patients. Additionally, hospitals must try to determine whether a patient is eligible for assistance before they refer a case to a debt collector, send negative information to a credit agency, place a lien on a patient’s home, file a lawsuit or seek a court order to seize a patient’s earnings

Health care lawyers said the rules could set an industry standard, influencing the practices of for-profit hospitals, because another federal agency, the Consumer Financial Protection Bureau, had endorsed them. The bureau has broad authority to supervise credit reporting companies and debt collectors.

For-profit hospitals, like other businesses, are typically owned by investors and pay dividends and taxes. By contrast, if a nonprofit hospital earns a surplus, it is normally reinvested in the organization, not distributed to shareholders. Nonprofit hospitals may qualify for tax exemptions if they can show that they are organized and operated for charitable purposes and provide “community benefits.”

“With these rules, it should be easier for low- and moderate-income people to get care without having to worry about a hospital or a bill collector hounding them for money they don’t have,” said Jessica L. Curtis, a lawyer at Community Catalyst, a national consumer group based in Boston.
>
“The rules protect low-income patients against price gouging,” Ms. Curtis said, “but hospitals can still define who qualifies for financial assistance.”

Melissa B. Jacoby, a law professor at the University of North Carolina and an expert on medical debt, said: “The regulations are really important. They don’t prevent a hospital from engaging in otherwise lawful debt collection, but hospitals must first evaluate a patient’s need for financial assistance.”

The rules, published in the Federal Register on Dec. 31, address a peculiar feature of hospital finances: For decades, uninsured patients have been required to pay much more than Medicaid, Medicare and private insurers pay for the same services. Uninsured patients were often the only ones who paid full “list prices” at hospitals.

Under the rules, patients eligible for financial assistance cannot be charged more than “the amounts generally billed” to people who have insurance through a government program or a private carrier.
t “no one will be charged much more than the Medicare rate.”

The rules clarify broadly worded provisions of the Affordable Care Act. Under the rules, each nonprofit hospital must assess the health needs of its community at least once every three years and take steps to address those needs. Hospitals that do not meet this requirement may be subject to a tax penalty of $50,000.

In addition, each nonprofit hospital must establish and publicize a written policy stating who is eligible for financial assistance and how people can apply.

Policies will vary. Some hospitals may offer free medical care to anyone with income below the federal poverty level ($11,670 a year for an individual), while others may set the threshold twice as high. Others still could provide discounts on a sliding scale for people with incomes up to three times the poverty level.

Hospitals often go to court to collect unpaid bills. Their collection practices have been documented in hundreds of court decisions around the country. In many cases, the basic facts are not disputed: A patient received care. The hospitals often win by default because the patients do not show up in court.

The rules generally require nonprofit hospitals to give consumers at least 120 days before taking “extraordinary collection actions,” which include reporting debts to credit bureaus and using debt collection agencies.

The Consumer Financial Protection Bureau, created by the Dodd-Frank Act of 2010, has taken a keen interest in health care debts.

“Since September 2013, debt collection has been the top complaint at the consumer bureau,” said Corey Stone, an assistant director of the agency. “Among all debt types, medical debt tops the list.”

Richard Cordray, director of the consumer bureau, said he supported the I.R.S. rules. Moreover, he said, “consumers would benefit if for-profit hospitals and all other medical providers adopted the same approach.”