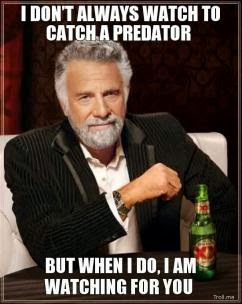 The tragedy and the comedy. Really it is laughable to think that this is best Police can do to "solve" crime by creating it. It is not laughable to the extent of lives they destroy in the process.

Sex crimes are those that we have as a culture not come to grasp well. We really struggle with it and we have now legislated it, ignored it, sensationalized it to the point of where it was an actual television show - To Catch a Predator.

Since that show we have come to learn how the host himself was a douchebag, that in fact much of it was hocus pocus bullshit-otis to drive ratings and generate money.

And it appears that like the proverbial bad penny it has come back to Florida to demonize and torment men who did nothing. And in our day and age of guilt is your proof you are not innocent, the idea that they had a conversation, did nothing to actually encourage it, were largely misled by Police on a money hunt not a man hunt is not the issue. So these men were arrested and because of the nature of the crimes in which they were charged cannot expunge or seal the records regardless of the outcome. Their money and property was taken and they have no recourse in which to recoup that loss in case further legal drama ensues and more names on documents in which to search and then in turn require more questions, less answers and of course more money lost in jobs, apartments, etc. Because in America if you were not guilty why were you charged? Innoncent until never proven not.

Then we have the extraneous costs. The labor and undoubted overtime for police resources, the costs of processing and eventually trying, bargaining or dismissing the claims, the taxpayers who fronted this and how much exactly was gained in false seizing of money and in fact ultimately returned?

Marbles have been collectively lost on this one.

To Entrap an Innocent
Florida police use sex-crime laws to bait men with no apparent interest in underage trysts.
Conor Friedersdorf
The Atlantic
Jan 8 2015,

After a year-long investigation, WTSP, a CBS affiliate in Tampa Bay, Florida, has uncovered an alarming pattern of police trying to entrap innocent adults in sex crimes. The stings follow the basic pattern familiar to anyone who has seen To Catch a Predator, except "many of the men whose mugshots have been paraded out by local sheriffs in made-for-TV press conferences were not seeking to meet children online. Instead, they were minding their own business, looking for other adults, when detectives started to groom and convince them to break the law."

You're probably thinking, Wait a minute, I'd run from underage encounters. How could men who were really seeking adult sex partners be groomed to break the law?

According to the 10 News investigation, police officers used the following tactics:

•"Sometimes, the officers would act as an interested adult with a teenage 'sister' who was also interested. Even though many of the men had no interest in the underage decoys, if they traveled to meet the adult, they were arrested as a 'sexual predator' and charged with 'traveling to meet a minor.'"

•"In the case of a 27-year-old Cape Coral man ... deputies arrested him even though he didn't even travel to meet a child for sex. Law enforcement officers responded to the man's legal 'casual encounters' Craigslist ad, pretending to be a 14-year-old girl, even though the ad said, 'age for all women must be 18+ no one under email me plz.' The man repeatedly told the undercover detectives that he was 'not OK' with meeting up with an underage girl, but because he didn't immediately end the conversation, he was arrested for utilizing his phone to solicit a sexual act from a child. Detectives went to his house and arrested him as a sexual predator of children."

•A 21-year-old "responded to a DateHookup.com ad posted of an 18-year-old woman. The officer ... started exchanging messages with the man when he asked her to a movie. The officer wrote, 'are you Ok with me being under 18?' The 21-year-old continued the conversation. Following more exchanged messages and texts, the detective later added that 'she' was about to turn 16, the age of consent in Florida. As the two continued to swap texts, the man said 'I don't want to have sex, is that OK?' But the detective, who repeatedly rejected the man's interest in a possible relationship, kept pushing sex and threatened to call off their meeting. When the man finally indicated he would have sex, police had enough to charge him ... "

In those cases and others like them, "detectives weren't posting ads of children, but ads of adults looking for other adults. They would then later introduce a child to the conversation." Detectives were also "reaching out to law-abiding men posting law-abiding ads on legal dating sites," as well as Facebook and Twitter, "seeking other adults."

These detectives behaved unethically and shamefully.

These detectives behaved unethically and shamefully.Predictably, many of the men arrested in these cases never went to trial because district attorneys didn't want to prosecute cases grounded in such dubious police tactics. If this approach 1) targeted men who almost certainly represented no actual threat to minors 2) in a way that made successful prosecutions relatively unlikely, why were police doing this? One incentive was the availability of federal funds earmarked for sex predator stings. Another factor: asset forfeiture, which allows police to seize the property of people who are arrested even if they aren't convicted.

"Florida's Contraband Forfeiture Act made it easy for agencies to seize property as their own from anyone accused of committing a felony—even if charges are ultimately never filed," 10 News reports. "Sex stings have become especially rich sources for seizures, since almost every man arrested is accused of traveling to seduce, solicit, or entice a child to commit a sexual act … even though no real children are ever involved ... However, the accusations are felonies, meaning law enforcement can seize suspect's vehicles, making it extremely difficult for them to ever get them back without paying thousands of dollars—or more—in cash to the arresting agency."

In essence, the police wasted time pursing non-threats to public safety in part to enrich themselves at the expense of people like a 24-year-old man arrested in a January sting, who "had to pay $10,000 cash to get his 2014 Lexus returned ... though all felony charges were later dropped in his case, he will not get the money back for either the negotiated settlement or the fees he paid an attorney to handle the vehicle case." This is yet another illustration of the need for asset forfeiture reform.

The tactic is legalized theft.

Journalist Noah Pransky and his colleagues at 10 News began looking into these stings in part because, as sheriffs in Florida kept trotting out men arrested for sex crimes, they wondered, How could these guys be so dumb as to keep falling for the same tricks that have been on TV for 10 years now? "We soon realized," Pransky told me, "that they're not falling for the same tricks. The sheriffs changed the rules."

What 10 News still doesn't know is just how far police went to deceive men, and how many men on totally legal adult dating sites they interacted with in their sting operation—we've only heard the stories of men who were ultimately arrested, not the stories of never-arrested men who were seeking adult partners on totally legitimate adult dating sites only to be strung along by detectives who flirted as if they were interested adults, then announced at a later time that they were underage. One wonders how much discomfort they caused lonely innocents with these stings. The news team has sought records from all stings in hopes of telling the parts of the story that are still hidden, but law enforcement has refused to turn over the documents they're seeking, an apparent violation of open records laws. Perhaps the FBI should make Florida sheriffs and detectives the targets of a sting.
Posted by Unknown at 3:12:00 PM