The Process is Due 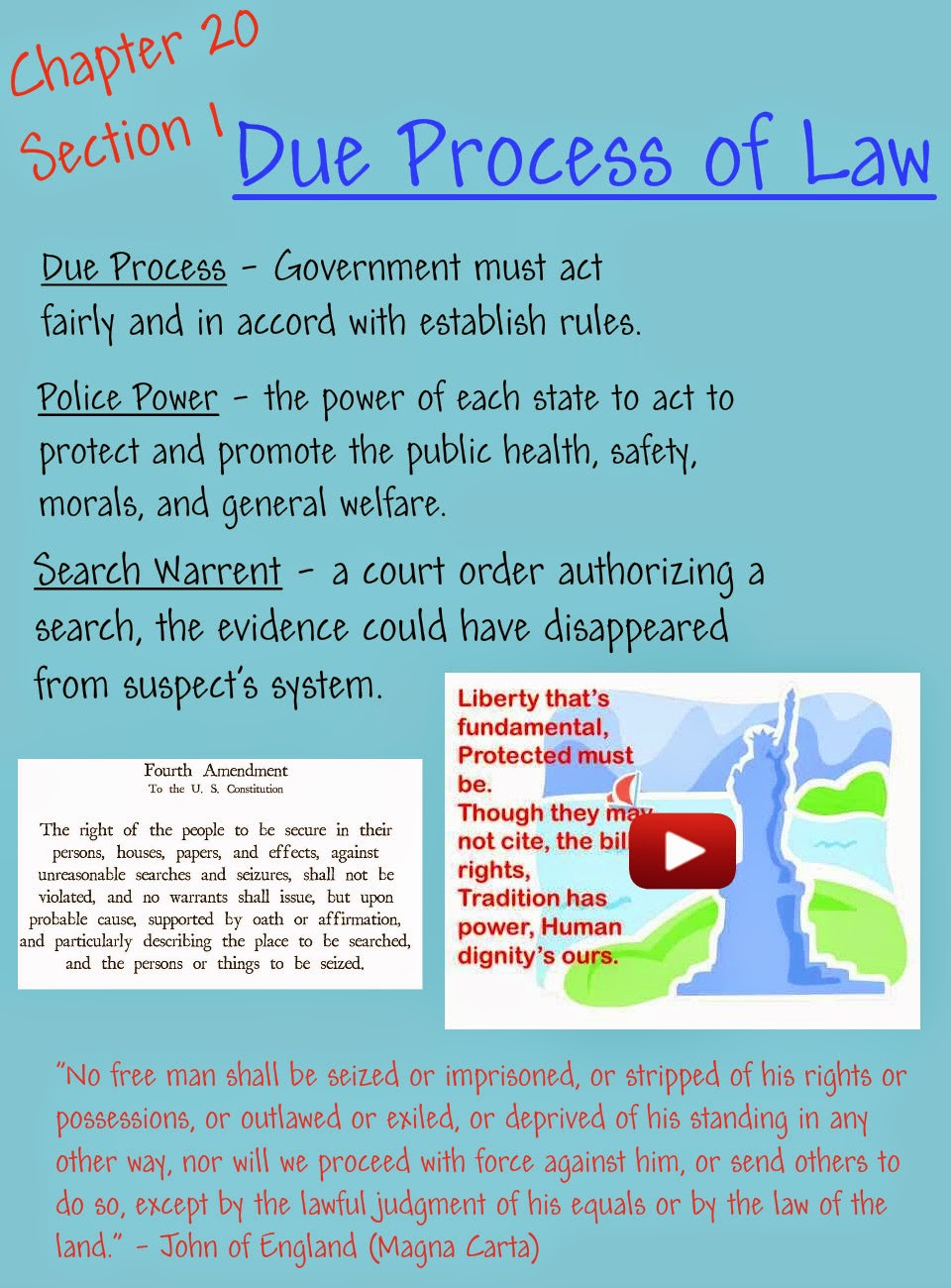 Due process of law according to the legal definiton:

n. a fundamental principle of fairness in all legal matters, both civil and criminal, especially in the courts. All legal procedures set by statute and court practice, including notice of rights, must be followed for each individual so that no prejudicial or unequal treatment will result. While somewhat indefinite, the term can be gauged by its aim to safeguard both private and public rights against unfairness. The universal guarantee of due process is in the Fifth Amendment to the U.S. Constitution, which provides "No person shall…be deprived of life, liberty, or property, without due process of law," and is applied to all states by the 14th Amendment. From this basic principle flows many legal decisions determining both procedural and substantive rights.


On that I have one response - really?

I have long said that this is not the case. You are on a conveyor belt and in one door and out another in under 3 days, 3 hours, 3 minutes. Usually something in threes. The arraignment where charges are levied against you, the hearing where you usually plea out or sign away your right to a speedy a trial and then the adjudication phase where you are sentenced by punishments written in stone by legislators eager to show they are tough on crime and can somehow pay off the extraneous folks who also profit from the process. Less than 10% of misdemeanor crimes make it to actual court and they are usually "resolved" in three days or less. That is what the Courts set aside for trial. Even Harvard said to me, "I never try to set a time frame for a Court trial it has to be fully played as evidence reveals itself through the course of testimony." Mine took a week of which days were cut in half by Jurors needing to attend a lunch, the Prosecutor Jennifer Miller needing a mental health break and the Judge who said this was all taking to long after numerous sidebars to the point we lost count and my other Lawyer let Harvard take them all... that is how bad it was. A fraud and circus combined.

It's all utter bullshit and faux drama with no inherent purpose or reasoning. This shit is pulled literally from assholes by assholes. I have yet to understand how any of the sentencing requirements are determined and what junk science, fake acronym group or bullshit federal policy that is tied to grants or funds that somehow comes up with these numbers.

The Wall Street Journal a bastion of conservativism asked that question about due process and found that in their observations of a Florida courtroom that there was little if any when it came to misdemeanor crimes. Seen, experienced it and had a Lawyer - not one but 2 - who utterly demonstrated how little one's civil rights mean when it comes to due process. Joke and farce and so far costing me over 25K. I begged and borrowed to get a Lawyer, not yet steal as well that would be another misdemeanor crime to put me back in the system.

The American Bar Asssocition Journal commented on that article, mistated the court observed and offerred no opinion, either way as Lawyers do, to resolve or somehow repair the problem. Daddy needs a new set of law books, no wait he gets an Indian outsourcer to look at Lexis Nexis for him.

Due process enables the defendant the right to well DEFEND oneself. Clearly in Texas that is an issue as today another individual is being exterminated for felony murder.****As I write this the Federal Court of Appeals has issued a stay*** The execution of Scott Panetti is so awash in problems and issues from the obvious fact that he is utterly mentally ill so severely that this is a matter of res ipsa loquitor - a matter of common knowledge that anyone can see his insanity. Apparently not the courts. There are many articles about the case and reading them makes one realize why they are doing this. He cannot be fixed and rejoin society so kill him. Wow just wow. That is the mental health resolve in this country.

The United Nations has demanded a reprieve, there is a request before the Supreme Court and the world is aghast and a story so tragic, so disturbing that once again the issue of the death penalty and our American concept of an eye for an eye is making the world blind.

Then we have New York City in an attempt to somehow resolve the idea that perhaps jail is not the solution nor killing them is either to find services to take the mentally ill out of the courts and jails and into treatment. We can hope and dream and we can wait as somewhere along the way the issue of funding and of course analysis will need to occur to see if it works, but frankly it could not be worse than the current system.

We are using jails and courts to house the ill, we have a major health crisis coming that will end up costing us more with an aging prison population who will have to rely on Medicaid/Medicare and other public services that was all to save us from the drug wars, the social wars and the race issue.

America the land of the free unless you do something or are somebody someone else doesn't like.
Posted by Unknown at 1:09:00 PM