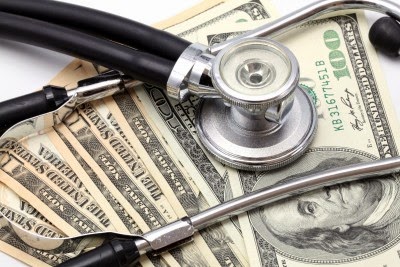 As I have often opined that the affordable care is act is neither about affordability nor care but about insurance and profit. And like my temperature my blood pressure rises.

Just the phrase "affordable medical care" is an oxymoron.

The average American can not sustain the costs of medicine and the costs vary dependent on many factors that are utterly disparate across America.

We have failed in another area desperate for reform.

Until we stop electing these morons who are beholden to the private industry check floggers we will continue to see our health slide as our checkbooks do when it comes to getting medical care.


How the High Cost of Medical Care Is Affecting Americans
By ELISABETH ROSENTHAL
DEC. 18, 2014

• A healthy, insured couple “slowly going under” because their premiums, co-pays and deductibles are now twice as high as their mortgage and food costs.

Over the past two years, the New York Times series Paying Till It Hurts has examined the high costs of ordinary medical care in the United States, exposing the reasons and chronicling the human fallout behind the nation’s extraordinary $2.9 trillion medical bill. In response, more than 10,000 readers shared individual experiences like the ones above.

But how does a collection of often heartbreaking, often startling tales reflect national experiences and attitudes? The available data did not answer all of my questions. So, using reader comments as a starting point, The Times designed a questionnaire with CBS News and conducted a national poll this month.

Here is a snapshot of the American experience with the cost of medical care.

Affording medical care is more of a hardship.

Reader comments and emails told of the increasing burden of health care costs on many Americans. T.R. Ellis, a freelancer in New York who has two healthy teenage daughters, wrote that the relentless rise of premiums has forced the family into a high-deductible plan, adding “For the first time, I will be paying medical bills by borrowing against our home.”.

The poll bore out readers’ experiences: Nearly half of respondents described the affordability of basic medical care as a hardship for them and their family, up 10 points from a year ago. While the Affordable Care Act has expanded insurance to millions of Americans, including those with existing conditions, it does not directly address cost. And cost is becoming increasingly problematic.

Many readers, even those with good insurance coverage, were surprised by rising out-of-pocket expenses. Tina H. relayed how having her son’s broken arm set in a temporary splint in an emergency room this year “cost us $3,500 out-of-pocket, even with decent insurance.” The poll found that just more than half of Americans say the amount of money they and their family have paid out of pocket for health care and prescription drugs has gone up over the past few years, and about a third of Americans said they have gone up a lot.

Why? Partly because newer insurance plans — including policies under the Affordable Care Act — are designed to make sure patients have “more skin in the game,” so they will be more discriminating users of health care. Fixed co-pays, say $20 for a visit to a doctor, are being replaced by requirements that patients contribute a percentage of charges, which often ends up costing them far more.

If you are curious about the survey the study can be found here
Posted by Unknown at 1:27:00 PM