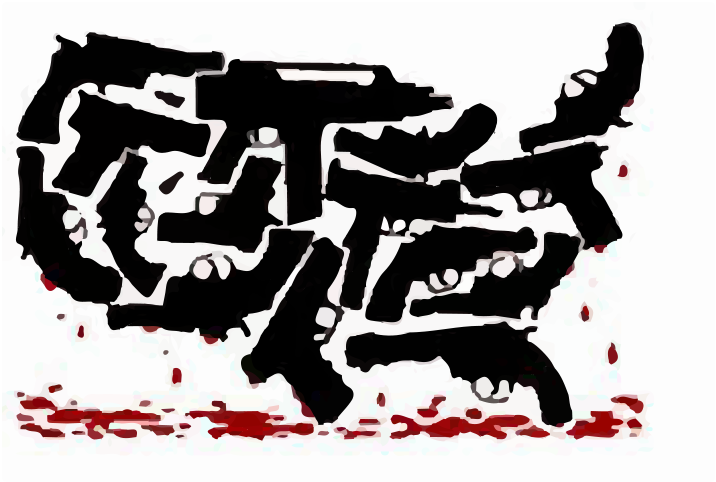 This I think speaks volumes about those who tote guns to resolve problems.  It is often anger,  it can be mental health, it can be political, it can be sheer frustration or an accident but it all comes down to one thing that is easily identifiable and in turn resolvable - access to guns.

The sheer lack of understanding that falls into why anyone would pick up a gun is not the issue - it is that they can simply pick up a  gun.

Until we face that hard truth we will have gun violence that will end up with innocents dead regardless of who is holding the handle of the gun.  The irony is that many are victims by those who are supposed to uphold and defend them from such is not lost, I turn my back on those who refuse to accept that their training and very job itself puts them in harms way but that does not excuse, explain or justify why shoot to kill is their resolution.  Guns they kill people way more than any other instrument of death.

The shooting deaths of two New York police officers in Brooklyn on Dec. 20 has again brought gun violence into the national conversation.

And as with many senseless and sensational events involving guns, the search for “why” has zeroed in on mental health. We read that the man believed to be the shooter, Ismaaiyl Brinsley, had an undiagnosed mental illness.

Last month, when a 14-year-old student killed himself and four classmates in Marysville, Wash., security analyst Anthony Roman predictably called for changes in the mental health system on MSNBC. After the mass shooting at the University of California at Santa Barbara, Mel Robbins, writing for CNN, argued that blame lay not with the National Rifle Association, but with “the shooter and the mental health services he did or didn’t get.”

This obsession with mental health as the root cause of gun violence is not only silly; it’s dangerous.
The elimination of severe psychiatric conditions would not solve our problems with gun violence.

Despite the sensationalism of shootings that occur in schools or against police officers, they are infrequent events compared to the totality of gun violence.

And while individuals with severe psychiatric disorders like schizophrenia or bipolar illness are more likely to engage in violent behavior, the frequencies of cases of these disorders are small. And the vast majority of people with severe and persistent mental illness are non-violent. According to one distinguished study, we would see only a 4 percent reduction in gun violence if mental illnesses were eliminated.

Gun violence is 20 times more prevalent in the United States than in other highly developed countries. But our mental health system is not substantially worse. Most wealthy countries spend between 6 and 8 percent of their gross domestic product on mental health care; the U.S. spends 7 percent GDP. We have 19 mental health professionals and 3.4 psychiatric beds per 10,000 people, rates that are similar to Western Europe and other high resource nations. A patient with moderate or severe psychiatric illness is just as likely to be seen for care in the United States as in Western Europe, and is just as likely to have a follow-up mental health appointment and receive at least minimally effective mental health treatment.

Estimates for rates of mental illness are subject to cultural and reporting  influences.  The United States has slightly higher estimates for anxiety and mood disorders but similar rates for severe and persistent mental illness as other  high resources countries.

In sum, the American mental health-care system is just about on par with other high resource nations, but the United States has a dramatically higher rate of gun violence.

This is not to say that the mental health system in the United States is without fault. The quality of care for milder psychiatric illness is slightly lower in the States than for our Western European allies. Low-income individuals have less access to mental care. One study documents that not simply resources but strategies to identify high risk youth and engage them in mental health treatment are needed. As a practicing psychiatrist, I regularly see race and economic disparities between the need for and access to psychiatric services. But these issues are universal.

But it is time to recognize that adequate treatment for people with a mental disorder is a distinct problem from gun violence. A much better indicator of whether someone will be violent is whether they come from a violent, poverty stricken environment, and whether they struggle with addiction. Eliminating poverty, domestic violence and childhood exposure to bloodshed would likely make a dent in our problem with gun violence. It may even have made a difference in the life of Ismaaiyl Brinsley.

But these are not problems for the mental health system to solve. And neither is the big problem of availability of guns. Among developed countries, the United States has the highest number of guns per every 100 people (88 as compared to 15 in Australia, six in Britain and 31 in Canada). In a 2012 survey, 43 percent of individuals indicated that there was at least one gun in the household.

If one accepts the data from CNN’s Gun Violence Project, over 80 people die from gun violence in a 24 hour period.  How long do we have to wait before meaningful changes in legislation that reduce access to guns?  That is far more difficult to predict.
Posted by Unknown at 9:49:00 PM