Its Called the BAR Association

There have been interesting stories about drunk lawyers of late, some serious and some well less so.

First up this one which I just love for a number of reasons. My comments are next to what I deem of import 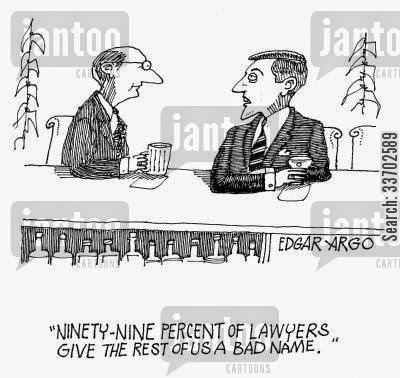 The drunken driver who hit five pedestrians on a Herald Square sidewalk is an immigration lawyer who was behind the wheel of a rental car with a suspended license, authorities said Thursday.

The five injured pedestrians include a 14-year-old girl and a woman in critical condition.

Mednik, of Bay Ridge, Brooklyn, and a male passenger were also taken to Bellevue Hospital, where she was hit with a slew of charges, including drunk driving and criminal possession of a controlled substance.

A crack pipe was found in the silver Mustang convertible she was driving, sources said. It is unclear who rented the vehicle. Say the pipe wasn't yours the previous renter left it.

In a grammatically incorrect online profile, the attorney claims experience in immigration, family and criminal law. Well that is a hell of a practice with immense need for a diverse skill set to navigate those cumbersome complicated laws but sure why not.

“I have arraigned people in various Criminal Courts and participated on of counsel basis as well as lead trials in areas of DWI, criminal trespassing, and possession of illegal substance cases,” she wrote. Takes one to know one, I guess

But in 2011, a judge suspended Mednik’s law license because she mixed her practice and personal funds in the same account and bounced business-related checks, according to court documents. The judge was unmoved when Mednik blamed her meds for the accounting issues.

“The respondent testified that during the relevant time period, she was emotionally distraught and unstable due to various mental-health issues and the medications prescribed to treat her condition,” says the court record.

The solemn photo of Mednik with a pixie haircut on her professional Web site is a far cry from her Facebook images, which include a shot of her topless and covering her breasts with her hands. Rule for Attorney's remember anything on social media can and will be used against you.

Mednik’s wild ride started as she was heading west on 34th Street between Seventh Avenue and Broadway, where she rear-ended a Subaru, cops said.

She then backed up and made a U-turn, heading east on the packed street, weaving in and out of traffic — repeatedly crossing over to the oncoming lanes.

She collided with a Toyota at Sixth Avenue, and then hit the cab of Kulijit Singh.

“The car was flying,” Singh said. The Mustang then mounted the busy sidewalk, where it struck the victims in front of horrified onlookers.


Or Above the Law that documents the Lawyer facing suspension for well taking nude pics of clients, that seems to be just one of the many problems with this Attorney and he charges you for the photos too! Bastard

Well Above the Law found out that they are not exempt from being sued for defamation by one of their own. Despite the fact that this Lawyer was also accused/convicted of raping and abducting a woman whom he met on Craigslist. Well it was CRAIGSLIST and his Lawyer could not get this guy off?! Well apparently this woman did not either. And now he is suing ATL for defamation. HILARIOUS.

And then on a more somber note, the Marshall Project, the blog site that is devoted to the problems in the Criminal Justice system has a disturbing article about the drunk and drugged lawyers who decided to crash that car in the courtroom while actually "defending" capital felony cases. Their state of mind is one of the many reasons one can apply for appeal which in many of these cases were denied. 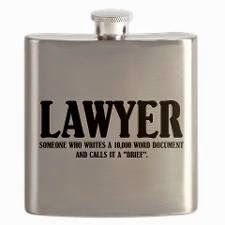 Shocking, I know. The nice thing is that "Blawgers" are already decrying this site so it means they are hitting a proverbial nerve. The Bar Association goes out the way to ensure they are a professional organization there to ensure the sanctity of the law profession.

This is a club that puts sanctimony above arrogance. Sounds like the University of Virginia campus that trumps ethics and morality while also encouraging a drunken frat society that may or may not be culpable in one rape but the others, well no charges were filed so no crime occurred. First rule of law. Second rule is get the money up front.

And a throw away as another cop commits misdeeds and facing the justice system will be plea bargaining down. Not that this is surprising given the nature of the charges, sexual offenses against a minor and all. Not that the onerous lifetime penalties and punishments would have anything to do with it. Lifetime registry, public shaming, job loss and the scarlet letter of child rapist during that mandatory prison sentence not to mention being a cop and all. Solitary not as bad maybe?

That's what one prosecutor is recommending be brought against a former state trooper. Donald Crawford suddenly resigned from Kentucky State Police in August, after sex abuse allegations surfaced from a traffic stop involving a minor in Livingston County

KSP conducted their own investigation recommending charges of official misconduct and sex abuse first degree and Commonwealth Attorney GL Ovey sees something else.

Ovey reviewed the investigation documenting accusations of misconduct and sexual abuse in a Livingston County parking lot, "This officer made a serious mistake, a serious lapse in judgment."

But the case will go now to the Livingston County Attorney's office, "As soon as we conclude today, I will forward this entire case file with all investigative interviews to Mr. Riley's office," says Ovey.

Ovey is handing over all materials. He says he's recommending lesser charges, "These charges in my opinion misdemeanors are warranted and they should be pursued."

Recognizing though some people make mistakes, he say public servants are different, "I've always believed a police officer, elected official should be held to a higher standard."

I spoke with Trooper Crawford's lawyer, Del Pruitt over the phone. He says although he hasn't received all the evidence, he didn't believe any felony charges would be recommended, and wasn't sure if Cawford would be guilty of any misdemeanors.

I also got in touch with the Livingston County Attorney, Brian Riley. He told me he hasn't received the evidence either, but he would most likely recuse or remove himself from the case because of past professional interactions with Crawford.

Because the case hasn't been closed and involves a juvenile, the details to the case are sealed right now.


Hypocrisy or irony when it comes to law. Justice holds the scales and that is what she is measuring not guilt vs innocence.