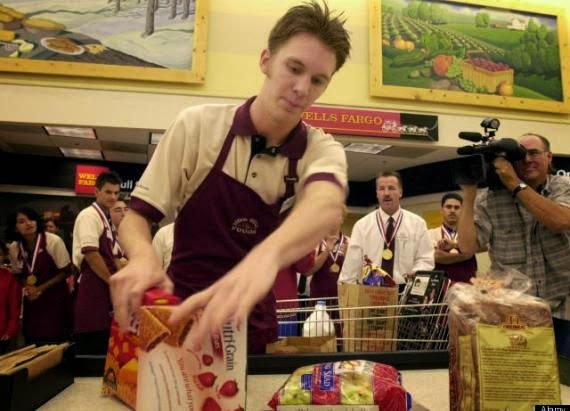 After last weeks Sad Sack blog entry discussing the boomer male and their issues regarding finding meaningful work, I had little sympathy as frankly I wondered if the story had centered on persons of color would the tone be as resigned as a new normal for the working class.

Then the Washington Post did a similar article and their main profile was a man of color who works two jobs. He did not discuss his politics or beliefs in the social services network but he was the perfect prototype of hard working that the bootstrap mantra describes.

Mr Green seemed to have no problem in accepting the fact that he had to support himself on $9 to $12/hour wages. His wife works as well and between them they log over 120 hours a week in working hours. I would have liked to ask the men in the New York Times article about that and their thoughts.

I link Mr. Green's story here and the Post is doing the second of the series on the Devaluing of the Middle Class on the issue of skills set and how they trap people into futility.

Then we had another article about women's worth and work in America yesterday in the New York Times and compared to European countries we are of course one step behind and only one step ahead in comparison to the Middle East frankly.

And again the stories centered on the working child raising issues of white women who are "middle class." Again failing to address the issues of single mothers and those of color. As noted this year it has been largely if not singularly women of color who have been arrested for leaving children unattended in cars or parks while either working or seeking work.

When you have a two tier system and then one even more divided and segregated it becomes an issue that centers around color and not income. The #BlackLivesMatter is an essential issue when it comes to police violence as it is clearly race sided but it is not exclusive when it comes to the criminal justice system or in fact our court system be it civil or criminal.

When you enter those doors all that goes out the window. I have personally experienced a Policeman lie on the stand, watch a Prosecutor veer into misconduct, watch my civil rights go out the window, face inordinate debt hiring Lawyers, finding myself utterly mystified and terrified as you see a Judge rule against you clearly confused himself about the law and rendering a competent decision and my Judge was black, the Prosecutor a woman and I am white, over 50 and hired not one but two lawyers and one with a degree from Harvard.

So to simply categorize the issues as those of color, there are many colors in America. They too matter. All lives matter!

To throw down the term racist would be the most expected response to this but I am a Humanist and human lives matter.

We have the issues of wages and income. Even Mark Bittman wrote an editorial that addresses all the issues we face when you are at the bottom end of the ladder and he poses the question as the title: Is It Bad Enough Yet?

I was deeply offended by the #crimingwhilewhite and the dismissive ways it was supposed to illustrate the bias and discrimination in the system. What it did was trivilize the issues of anyone who has found themselves fighting for their rights regardless of color. Ask Michael Morton a white man who found himself in prison for decades over a murder he did not commit. Or Manuel Velez or Susan Mellen.

To ignore the reality of how our system is broken, shattered and utterly reprehensible would require one to actually experience it first hand. To watch the secret meetings, to see the confusion and fear and to hear the absurdity that is said in courtrooms as the need to vilify and collect scalps is more important than Justice or truth. Truth has no place in our courts regardless of type - civil or criminal. And if you think its Cops who are the problems they are only one variable in this equation, your problems begin with the Lawyers who are elected to the Legislature and in turn those who work to preserve their monopoly and in turn their professions. They are the Doctors in the hospitals if they chose to they could fix this they choose not

The working class have no place in society. It costs more to actually jail and penalize everyone for every nuisance petty crime and infraction then to actually educate the populace. But that is not the point. When you look at the massive costs to fuel the system it explains why every fine and fee and forfeiture is collected. They will have to pay for the costs in Ferguson and they will pay for that injustice ten times over.

Property taxes in Texas are an issue as the state has to pay those coffers somehow. I think the blog Grits for Breakfast provides a worthy analysis. And the fines and fees are not enough when you have those being fined and feed unable to pay as they don't have the wages in which to do so. So then what? Well jail em up. Ah the circle of the criminal justice system.

Yes we have issues surrounding race. But we have issues that include all races and the working poor cover both gender and race and we have children who are not getting adequate nutrition, education and family time or care taking because their parents are absent - in jail or at work. The reality is a tragedy. Until we face that together we have to unite and vote out the same idiots who create these absurd laws and punishments that are draining our souls, our economy and our country.

We are all becoming a nation of sad sacks.