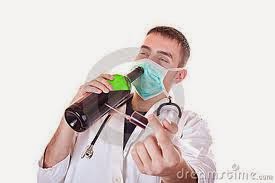 Just reading this says everything. To add my comments would be superfluous at this point

Expecting mothers said they appreciated how Dr. Christopher S. Driskill, one of the few obstetricians and gynecologists here, would take his time with them. One patient of his, whose pregnancy proved so challenging that she needed to be sent to a bigger state hospital across the state line in Lubbock, Tex., recalled how the doctor kept checking in again and again, to make sure she was all right.

And his colleagues held him in such high regard that they elected him president of the New Mexico Medical Society, the state’s main professional organization. He was set to take the helm in May.

But now Dr. Driskill’s livelihood is on the line, his license to practice suspended last month by state officials. The New Mexico Medical Board, the state licensing authority, has asked him to respond to a long list of accusations that include sexual trysts with multiple patients, drinking on the job, writing “inappropriate notations of a personal nature into certain patient medical charts” and neglecting patients in labor after he had admitted them to the hospital, with nurses trying to track him down.

On at least one occasion, according to the board’s complaint, he did not show up to a delivery because he was having sex with another patient.

The medical board issued a stern denunciation: “You currently pose a clear and immediate danger to the public health and safety if you continue to practice medicine.”

That declaration and the salacious accusations that prompted it have been the talk of Hobbs, a remote city of about 40,000 that is unaccustomed to generating international news. Recent headlines in The Hobbs News-Sun, the local newspaper, have been about new holiday decorations in the neighboring town of Lovington and the introduction of solar-powered trash cans. But articles about Dr. Driskill have gone viral, appearing everywhere from The Daily Mail of Britain to Cosmopolitan magazine’s website. (The headline on Cosmo’s website: “This Might Be the Worst Doctor Ever.”)

The accusations have created something of a soap opera in a city small enough that if you were not a patient of Dr. Driskill’s — a 42-year-old with a wife and four children who has lived here for more than a decade — there is a good chance you know someone who was.

Christy Rodriguez, whose three children were delivered by Dr. Driskill, said she was surprised when she saw an article about him posted on Facebook.

“It had me wondering if he was drunk on the job when he did my three kids,” Ms. Rodriguez, 25, said at the boutique where she is a sales associate.

Leah Wingert, 36, had been about to make an appointment with Dr. Driskill at the suggestion of friends just as the accusations against him came out. “They are really heinous, if the allegations are really true,” she said as she tied ornaments to a Christmas wreath at the downtown office supply company where she works.

Dr. Driskill declined to comment, as did his lawyer. Last week, the prosecutor for the medical board and Dr. Driskill reached an agreement that could allow him to resume his medical practice, both sides confirmed. The terms of the agreement have not been disclosed and must be approved by the board, which is likely to take up the issue at a January meeting.

Dr. Driskill has been just one in a handful of obstetricians and gynecologists in the area, practicing at adjacent medical facilities, Premier OB/GYN and Lea Regional Medical Center. According to the medical board’s charges against him, he was fired by Premier in August for being drunk on the job, keeping a “personal cache of alcohol” in his office at Premier, having sex with patients (some of whom were also employees of Lea and Premier) and other infractions. No criminal charges have been filed.

The New Mexico Medical Society is reserving judgment, as are other people here. The society “will make no comment on the board’s notice of contemplated action until there is due process for Dr. Driskill,” said a statement from Randy Marshall, the organization’s executive director.

Dr. Jose Garcia, a pediatrician who has worked closely with Dr. Driskill, said he found the depiction of a sloppy and irresponsible doctor difficult to reconcile with his perception of him as a well-regarded physician and a bit of a “health nut.”

Dr. Garcia, who was interviewed on the recommendation of Dr. Driskill, said he had never seen him drinking at social gatherings.

“Why are they doing this to his family?” Dr. Garcia, who takes care of many children who were delivered by Dr. Driskill, said at his practice during a break between seeing patients.

“What bothers us as colleagues is that we’ve known him for quite a while, and we’ve never seen erratic behavior or anything that indicates drinking or having sex with patients,” he said.

Others, including patients and their families, offered sympathy for Dr. Driskill even as they talked about the scandal.

“I hate to see something bad happen to someone who did such a good job taking care of my daughter,” said Lisa Norman, whose 8-year-old grandson was delivered by Dr. Driskill. “Trust me, if he didn’t take care of her, I would have spoken up. I can’t say anything bad.”

Ms. Wingert said that although she and others believed that the doctor deserved the benefit of the doubt, she wondered how his reputation would recover. When something so dramatic happens in a town as small as Hobbs, “there’s no getting away from it,” Ms. Wingert said as she tied one last white bow to a wreath and declared it done.
Posted by Unknown at 10:18:00 PM