And that summarizes the regulators of the banks over the last two decades. 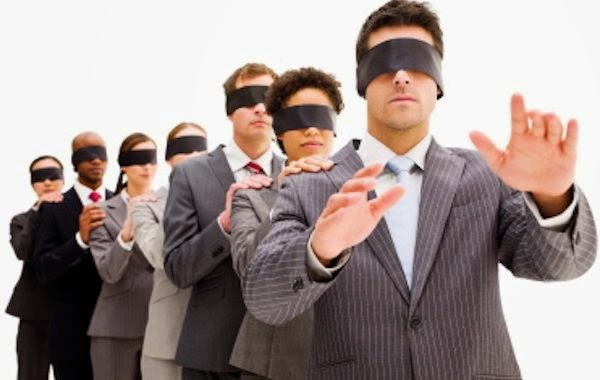 As now Met Life becomes designated "too big to fail" it appears that another private company will get bail outs and taxpayer supported dollars should they go the way of AIG, Goldman, Bank of America, GM, fill in the blank. All while wrapping up the TARPS and other assorted programs meant to bail out the nation. Clearly some programs worked while others were largely slight of hand and one means slight as in actual assistance to the great unwashed.

The notion of self management was truly shoved down the collective throats thanks to Randian disciple Alan Greenspan. He and his acolytes made sure that the belief the private sector knew more and would act on their best interests and clearly they did. It was just their best interests had no overlap with anyone else's.

An eye for an eye leaves the whole world blind and when it comes to Wall Street we turn a blind eye.

This is Floyd Norris' last column in the New York Times, he too a casualty of the loss of profit in the media interest and I suspect took the buyout offered to staff to stave off more cutbacks. That unfortunately did not happen and the Times will be laying off more people. And I thought the economy was doing better. Guess its better if you are the right side of the street.

When Regulators Are Blind to Rules
DEC. 18, 2014
By FLOYD NORRIS

What happens when you turn over regulatory responsibilities to people who think there is really no need for regulation?

The United States, and much of the world, tried that for a large part of the last quarter-century. Along the way, a series of crises sent out warning signals that were not heeded.

After the economy recovered from the stock market crash of 1987, Alan Greenspan, the Federal Reserve chairman who had poured money into the market to stem the damage, was celebrated as a hero. He believed in what came to be derided as “market fundamentalism,” holding that markets were far smarter than governments and would produce optimal results if only there were no interference from politicians.

That analysis certainly seemed reasonable through much of the 1990s. The economy grew without a recession for 10 years, the longest such stretch in United States history. A few people worried that bad things could happen as a result of the explosive growth in derivative securities, but they were largely marginalized by the obvious fact that only good things were happening.


One reason recessions were previously more common was that the Fed often found itself — in the words of William McChesney Martin Jr., the chairman of the Fed from 1951 to 1970 — “in the position of the chaperone who has ordered the punch bowl removed just when the party was really warming up.”

He made that remark in 1955, after the Fed raised interest rates repeatedly, seeking to slow the economy even though the inflation rate was close to zero. Fed officials, The New York Times reported at the time, cited “the continued buoyancy of the stock market” as a reason to fear that “the surge of economic growth has enhanced expectations of growth beyond reasonable limits.”

That was exactly what was happening in the late 1990s, but Mr. Greenspan saw no reason to be concerned about rapidly rising asset prices. Was it not clear that markets were efficient?

Starting in 1997, a series of crises appeared to be unrelated. Each was viewed as an extraordinary event.

It went largely unnoticed that those crises had something in common: destabilizing factors caused by financial innovation and the lack of regulation.

That was true in Asia, where countries had followed the advice of groups like the International Monetary Fund and done nothing to control huge flows of capital into their economies. When the news turned bad, that capital tried to flee. Currencies collapsed and bailouts ensued.

Then came the collapse of the Long-Term Capital Management hedge fund. It had used too much leverage as it traded derivative securities with strategies that assumed some market relationships were sure things. The Fed had to step in to persuade — some might say force — the big banks to bail out the fund.

As share prices rose in the 1990s, many concluded that the stock market was a sure thing, at least in the long run. A book called “Dow 36,000” became a best seller. People quit good jobs to join start-ups, hoping that stock options would make them rich when their new employer went public. Silicon Valley won a bitter battle to keep company books from having to reflect the real value of the options being handed out, arguing in essence that the party might end if that happened.

Executives at more than a few companies — Enron and WorldCom being the most notable — cooked the books to allow themselves to share in the riches.

When share prices of high-flying technology and telecommunications companies collapsed in 2000 and 2001, the scandals led to passage of the Sarbanes-Oxley law, which for the first time created a regulator to pay attention to the auditors, whose work had been woefully inadequate. Wall Street analysts faced new rules on the theory that they had promoted stocks they knew were worthless.

But few wanted to mess with the financial engineers.

Instead, their standing only grew. Bank capital rules came to allow the banks to use their own — presumably sophisticated — models to calculate how much capital was needed for any asset they owned. Countries like Ireland and Iceland developed large banking systems and were hailed for finding high-paying, nonpolluting jobs.

“All the new financial products that have been created in recent years contribute economic value by unbundling risks and reallocating them in a highly calibrated manner,” Mr. Greenspan said in early 2000. “The rising share of finance in the business output of the United States and other countries is a measure of the economic value added by the ability of these new instruments and techniques to enhance the process of wealth creation.”

Mr. Greenspan was far from the only one to be entranced by the wisdom of Wall Street. In another speech that spring, Lawrence Summers, the Treasury secretary at the time, discussed the problems of “market overconfidence, the toxic combination of overleverage and illiquidity, nontransparency and the risks that hedging strategies and models may not live up to their design” that had been demonstrated by Long-Term Capital Management’s collapse.

But did that mean Washington needed to act? Far from it.

“Let me be clear,” Mr. Summers said in a speech to the Futures Industry Association. “It is the private sector, not the public sector, that is in the best position to provide effective supervision. Market discipline is the first line of defense in maintaining the integrity of our financial system.”

And it was to be the only line. Later that year, with bipartisan support, Congress passed, and President Bill Clinton signed, the Commodity Futures Modernization Act of 2000. That act barred the regulation of over-the-counter derivatives.

Had there been such regulation, it is at least possible that the financial crisis might have been less severe than it was. To a significant extent, derivatives enabled risk to be shifted from those who understood it to those who did not. Securities deemed risk-free by the rating agencies turned out to be worthless. Much of the financial innovation that so impressed Mr. Greenspan had been designed to let banks find ways to reduce their capital levels without the regulators noticing.

“I hear about these wonderful innovations in the financial markets and they sure as hell need a lot of innovation,” Paul Volcker, the former Fed chairman, said in late 2009. He said two of them — credit-default swaps and collateralized debt obligations — had nearly destroyed the economy.

There is still good reason to think that markets are better at allocating capital than are governments. But if the events leading up to the financial crisis proved anything, it is that markets freed of meaningful oversight did a horrible job.

After the crisis, financial regulation was stepped up around the world. Significantly, the countries that seem to have been the most vigilant in raising bank capital standards are the United States, Britain and Switzerland. They are the countries that have the biggest financial sectors — and thus the most to lose if their banks again teeter on the brink of collapse.

Perhaps the standard Walter Lippman set in 1933 — that a good crisis is one that leads to solutions of the problems that caused the crisis — was met. But the new reforms have not been tested.

It could be that the test is beginning in Russia, where the ruble has collapsed to the point that Russian merchants are reluctant to accept it. Capital is fleeing, and Russia appears to be hesitant to use its vaunted foreign exchange reserves to defend the currency. The government says it will not impose capital controls, but such promises only serve to increase fears they will be broken.

In the 1960s, when exchange rates were fixed — at least until a crisis forced action — there was a saying: “He lied like a finance minister on the eve of devaluation.”

The important issue for the world’s financial system is the extent to which the crisis can be contained. Russian companies owe a lot of euros and dollars, and the lenders — banks and bondholders — could suffer substantial losses. Such losses could force them to sell other assets, spreading the crisis. Already stock markets and currencies in other emerging markets are losing value, reflecting the fear of contagion. We can hope that Western banks really do have enough capital cushion to weather any storm that may develop.

In normal times, a country in trouble can turn to the I.M.F. for a bailout, albeit one with strings. Russia probably cannot do that on terms it would be willing to accept, given Western anger over its actions in Ukraine.

Indeed, wags are already suggesting a title for a book to be written about the crisis: “Crimean Punishment.”
Posted by Unknown at 3:53:00 PM