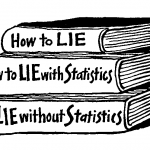 Or they don't. My mother used to say when someone insulted you, "take it from the source" meaning whoever is saying it is not worth the time or effort to respond. She also used to say, "don't go to jail doing the world a favor."

Today the New York Times did an excellent job explaining how numbers matter to those who are taking them and more importantly those who are paying them. It is all a numbers game and as we have found out that even well established think tanks have bungled in the jungle when it comes to the check and match; just like politics.

Numbers do lie when people rig them. It is a game of chance and opportunity, ask Wall Street they know Vegas is everywhere.


The economic statistics are fake. There is no real economic recovery.

That refrain was heard in 2012, when Jack Welch, the former chief executive of General Electric, claimed that a reported decline in unemployment was “unbelievable.” He added, “These Chicago guys will do anything,” referring to the Obama administration.

That came just before the election, in which voters returned President Obama to the White House.

On the day of the midterm elections came the news that Paul Singer, a hedge fund billionaire and top Republican donor, thinks there is a lot of faking going on now. He sees economic disaster ahead.

“Nobody can predict how long governments can get away with fake growth, fake money, fake jobs, fake financial stability, fake inflation numbers and fake income growth,” Mr. Singer wrote to his investors, according to a report by Bloomberg News.

A spokesman for Mr. Singer declined to confirm the report and said Mr. Singer would not agree to be interviewed.

I cannot recall an economic recovery that was more widely doubted than the current one. On the left, the response has often been to cite statistics indicating that benefits have largely gone to the wealthy and not spread down the economic ladder. There is something to that, but it is always true that recoveries, like recessions, are spread unevenly throughout the economy.

On the right, the claim has more often been that the numbers are manipulated by the Obama administration to fool the public.

Is that true? I doubt it. The idea that politicians could force government bureaucrats to fake the statistics, and do so without any leaks, is hard to believe. Such a conspiracy, if it managed to exist for long, would be a marvel of organization. But those who believe in the conspiracy theory also tend to subscribe to the theory that governments are generally incompetent and unable to do anything right. Those two beliefs do not correspond.

That is not to say that governments cannot lie about numbers. Greece used phony economic numbers to qualify for the eurozone. It is too bad for everyone, including the Greeks, that the deception succeeded. And the Soviet Union’s economic growth figures seem to have been considerably exaggerated. One reason may be that lower-level officials were under pressure to report good numbers to show they were doing a good job.

Anyone who has ever studied corporate accounting frauds will recognize that problem.

But the people who collect the figures that go into economic statistics are not under that pressure. They will not lose their jobs if the economic statistics look bad. They will lose their jobs if they do not collect enough data, and there have been cases where government interviewers were said to have faked survey responses to cover up the fact that they had not done enough work.

Nonetheless, government statistics are often questionable and sometimes turn out to have been highly misleading.

Unfortunately for policy makers, such errors are most likely to be severe at precisely the time that the economy is turning around. Estimates are included in most economic statistics, and those compiling the figures tend to assume that previous trends will continue. We now know the economy was much worse off in early 2009 than the economic statistics indicated at the time.

By the time Mr. Welch voiced his doubts in 2012, the figures showed that a recovery, though not a particularly strong one, was underway. It turns out the numbers were wrong, but not in the way Mr. Welch believed. Employment was growing more rapidly than the initial figures indicated.

Both surveys have problems. The job numbers are revised twice after they are released, as late responses to the survey are tabulated. They include an estimate — known as the birth-death model — reflecting the number of jobs created at companies too new to be eligible for the survey and the number of jobs lost when existing companies go out of business.

Then, more than a year later, the numbers are completely revised to reflect how many workers companies said they had when they paid premiums for unemployment insurance.

Those revisions can be drastic. In the 10 months from April 2008 through January 2009, the current estimate is that the economy lost 1.9 million more jobs than the initial reports indicated.

As President Obama began his term in 2009, the economy appeared to have suffered much less than current figures now indicate.

The figures in the household survey are rarely revised, but they are subject to significant sampling errors. For the total number of people working, the Bureau of Labor Statistics says that there is a 90 percent probability that the correct number is within 400,000 of the number reported and that the unemployment rate is within 0.2 percentage point of the reported figure. What that means in practice is that month-to-month fluctuations may be meaningless. To possibly make things worse, more people decline to be interviewed now than in years past. That may make the numbers less reliable than they used to be.

The survey questions are complicated. It is not simply a matter of whether a member of the household was working during the week covered by a monthly survey. Was a person without a job looking for work? If so, that person is counted as unemployed. If not, the person is deemed not to be in the labor force. Further questions are meant to determine if that person was not looking because he or she was discouraged about the chances of finding a job. If so, that person goes into a category that is included in a different indicator of unemployment.

In the current recovery, that latter index has not declined nearly as much as the regular unemployment rate. That fact has been noted by Janet L. Yellen, the Federal Reserve chairwoman, as an indication the job market is not as healthy as the unemployment rate might make it appear.

The government figures that may be least believed by the public are the inflation calculations. Since mid-2012, the index of prices for personal consumption expenditures — the index most closely watched by the Fed — has consistently risen by less than the Fed’s target of 2 percent. But consumers, as reflected in the Conference Board’s Consumer Confidence Survey, have always forecast annual inflation of at least 5 percent.

Why the discrepancy? It is possible that people are more likely to notice goods whose prices have risen than those whose prices have dropped. Mr. Singer, in his denunciation of official figures, questions adjustments that are made for the quality of goods and argues that government indexes understate the costs for the wealthy because prices of things like luxury real estate and art have increased far more than the prices of goods purchased by the middle class. And some people subscribe to a conspiracy theory that the Consumer Price Index figures are deliberately held down so the government can avoid paying richer Social Security benefits.

So what are people to make of the blizzard of economic statistics? First, be suspicious of rapid changes in any indicator, particularly if other indicators do not show similar changes. Look for trends that continue. And pay attention to the real world around you. The chaos in the financial world in late 2008 should have warned Obama administration economists that the official statistics might be overstated.

And try to separate reality from ideology. In 1983, when the economy accelerated after the early 1980s recessions, some liberals were sure the numbers had to be wrong, given that it was obvious nothing good could come from the policies of President Ronald Reagan.

In 2010, there were widespread forecasts by conservatives that the economy could not improve, that inflation was bound to accelerate and the dollar would collapse if the Fed foolishly pursued its policy of quantitative easing.

All those forecasts turned out to be wrong. Does that mean the forecasters were mistaken? Some would rather think it shows the statistics are being faked.
Posted by Unknown at 8:23:00 PM