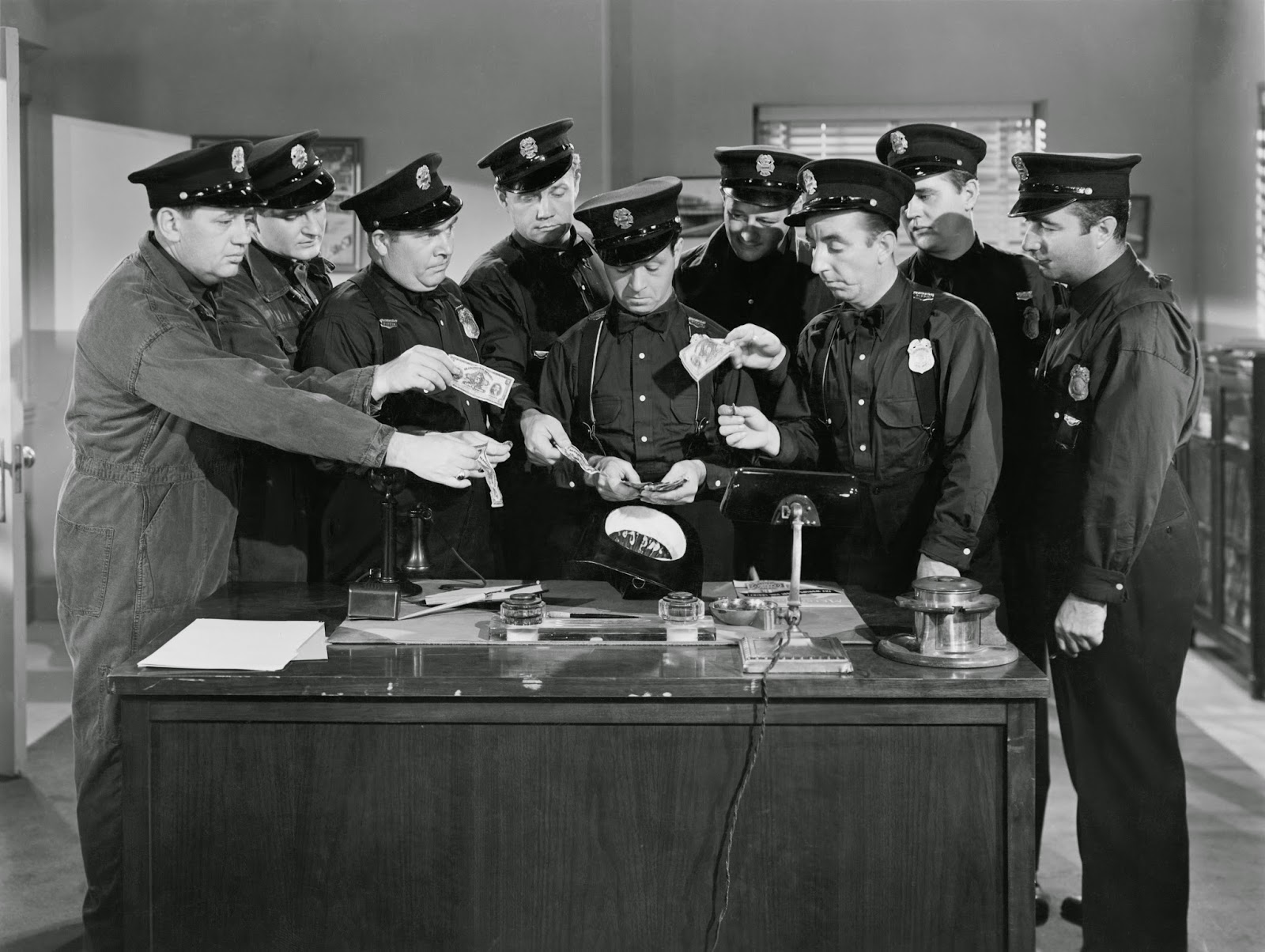 When Police do it its not a felony. That is it plain and simple when it comes to civil asset forfeiture. Today the New York Times picks up after the Washington Post's amazing series on the little known assets about civil forfeiture law that enables Police to pretty much pick and choose what stuff of yours they want to take and can using whatever obfuscated reasoning and bullshit laws to do so.

The videos referenced are in the link to the story below. This is just another reason why we should actually start holding our electorate accountable, they passed this law without any transparency or any specifications on how it is to be used. Much like the same one that passes off the military excess to local forces who simply apply for it, no training nor justification to have a mine resistant vehicle in a township that is largely funded through municipal fees and fines. Makes no sense. Well what does when we have no sensible expectations for the morons we elect?

Police Use Department Wish List When Deciding Which Assets to Seize
By SHAILA DEWAN
NOV. 9, 2014


The seminars offered police officers some useful tips on seizing property from suspected criminals. Don’t bother with jewelry (too hard to dispose of) and computers (“everybody’s got one already”), the experts counseled. Do go after flat screen TVs, cash and cars. Especially nice cars.

In one seminar, captured on video in September, Harry S. Connelly Jr., the city attorney of Las Cruces, N.M., called them “little goodies.” And then Mr. Connelly described how officers in his jurisdiction could not wait to seize one man’s “exotic vehicle” outside a local bar.

“A guy drives up in a 2008 Mercedes, brand new,” he explained. “Just so beautiful, I mean, the cops were undercover and they were just like ‘Ahhhh.’ And he gets out and he’s just reeking of alcohol. And it’s like, ‘Oh, my goodness, we can hardly wait.’ ”

Mr. Connelly was talking about a practice known as civil asset forfeiture, which allows the government, without ever securing a conviction or even filing a criminal charge, to seize property suspected of having ties to crime. The practice, expanded during the war on drugs in the 1980s, has become a staple of law enforcement agencies because it helps finance their work. It is difficult to tell how much has been seized by state and local law enforcement, but under a Justice Department program, the value of assets seized has ballooned to $4.3 billion in the 2012 fiscal year from $407 million in 2001. Much of that money is shared with local police forces.

The practice of civil forfeiture has come under fire in recent months, amid a spate of negative press reports and growing outrage among civil rights advocates, libertarians and members of Congress who have raised serious questions about the fairness of the practice, which critics say runs roughshod over due process rights. In one oft-cited case, a Philadelphia couple’s home was seized after their son made $40 worth of drug sales on the porch. Despite that opposition, many cities and states are moving to expand civil seizures of cars and other assets. The seminars, some of which were captured on video, raise a curtain on how law enforcement officials view the practice.

From Orange County, N.Y., to Rio Rancho, N.M., forfeiture operations are being established or expanded. In September, Albuquerque, which has long seized the cars of suspected drunken drivers, began taking them from men suspected of trying to pick up prostitutes, landing seven cars during a one-night sting. Arkansas has expanded its seizure law to allow the police to take cash and assets with suspected connections to terrorism, and Illinois moved to make boats fair game under its D.W.I. laws, in addition to cars. In Mercer County, N.J., a prosecutor preaches the “gospel” that forfeiture is not just for drug arrests — cars can be seized in shoplifting and statutory rape cases as well.

“At the grass-roots level — cities, counties — they continue to be interested, perhaps increasingly so, in supplementing their budgets by engaging in the type of seizures that we’ve seen in Philadelphia and elsewhere,” said Lee McGrath, a lawyer for the Institute for Justice, a public interest law firm that has mounted a legal and public relations assault on civil forfeiture.

Much of the nuts-and-bolts how-to of civil forfeiture is passed on in continuing education seminars for local prosecutors and law enforcement officials, some of which have been captured on video. The Institute for Justice, which brought the videos to the attention of The Times, says they show how cynical the practice has become and how profit motives can outweigh public safety.

In the sessions, officials share tips on maximizing profits, defeating the objections of so-called “innocent owners” who were not present when the suspected offense occurred, and keeping the proceeds in the hands of law enforcement and out of general fund budgets. The Times reviewed three sessions, one in Santa Fe, N.M., that took place in September, one in New Jersey that was undated, and one in Georgia in September that was not videotaped.

Officials offered advice on dealing with skeptical judges, mocked Hispanics whose cars were seized, and made comments that, the Institute for Justice said, gave weight to the argument that civil forfeiture encourages decisions based on the value of the assets to be seized rather than public safety. In the Georgia session, the prosecutor leading the talk boasted that he had helped roll back a Republican-led effort to reform civil forfeiture in Georgia, where seized money has been used by the authorities, according to news reports, to pay for sports tickets, office parties, a home security system and a $90,000 sports car.

In defense of the practice, Gary Bergman, a prosecutor with the Prosecuting Attorneys’ Council of Georgia, said civil forfeiture had been distorted in news reports. “All they hear is the woman was left on the side of the road and the police drove off with her car and her money, no connection to drugs,” he told other prosecutors at the session.

“I’m not saying that that doesn’t happen — it does. It should not. But they never hear about all the people that get stopped with the drugs in their cars, in their houses, the manufacturing operations we see, all the useful things we do with the money, the equipment, vehicles. They don’t hear about that.”

In an interview, Mr. Connelly said that the Las Cruces ordinance does only what the State Supreme Court has said is permissible.

Sean D. McMurtry, the chief of the forfeiture unit in the Mercer County, N.J., prosecutor’s office, said forfeiture contributes to only a small percentage of local budgets but it is a good deterrent and works especially well against repeat offenders, such as domestic violence perpetrators who repeatedly violate a restraining order. “We’re very proud of our forfeiture operation,” he said in an interview.

Mr. McMurtry made it clear that forfeitures were highly contingent on the needs of law enforcement. In New Jersey, the police and prosecutors are allowed to use cars, cash and other seized goods; the rest must be sold at auction. Cellphones and jewelry, Mr. McMurtry said, are not worth the bother. Flat screen televisions, however, “are very popular with the police departments,” he said.

Prosecutors boasted in the sessions that seizure cases were rarely contested or appealed. But civil forfeiture places the burden on owners, who must pay court fees and legal costs to get their property back. Many seizures go uncontested because the property is not worth the expense.

And often the first hearing is presided over not by a judge but by the prosecutor whose office benefits from the proceeds, and who has wide discretion in deciding whether to forfeit the property or return it, sometimes in exchange for a steep fine.

Mr. McMurtry said his handling of a case is sometimes determined by department wish lists. “If you want the car, and you really want to put it in your fleet, let me know — I’ll fight for it,” Mr. McMurtry said, addressing law enforcement officials on the video. “If you don’t let me know that, I’ll try and resolve it real quick through a settlement and get cash for the car, get the tow fee paid off, get some money for it.”

One criticism of civil forfeiture is that it results in widely varied penalties — one drunken driver could lose a $100,000 luxury car, while another forfeits a $2,000 clunker.

In an interview, Mr. McMurtry acknowledged that he exercises a great deal of discretion. “The first offense, if it’s not anything too serious, we’ll come up with a dollar amount, depending on the value of the car and the seriousness of the offense,” he said. “I try to come up with a dollar amount that’s not so high that they can’t afford it, but not so low that it doesn’t have an impact. If it’s a second offense, they don’t get it back.”

Prosecutors estimated that between 50 to 80 percent of the cars seized were driven by someone other than the owner, which sometimes means a parent or grandparent loses their car. In the Santa Fe video, a police officer acknowledged that the law can affect families, but expressed skepticism of owners who say they did not know their relative was running afoul of the law.

“I can’t tell you how many people have come in and said, ‘Oh, my hijito would never do that,’ ” he said, mimicking a female voice with a Spanish accent.
Posted by Unknown at 3:20:00 PM