I do watch the Real Housewives franchises on Bravo and to say reality is to say that I am really really young.  The tip I found out was to cut back the really's and I only use them to end a sentence as a question I can see why when buying a bottle of wine I am not carded, no really?

The one I find most dull given that it is in New Jersey you would think otherwise is in fact New Jersey. Until they added the interesting twins and the couple whose husband made this declaration

I don’t fight. I think it’s stupid. I’m trained as an attorney. If I want to hurt you, I’m going to sue you. I’m going to leverage your house. I’m gonna give you three years of hell in a courtroom. I’m going to bleed you dry financially, and I’m going to humiliate you as I depose you for eight hours and make you my bitch


Right there I thought really?  He is not an Attorney or at least a practicing one on the show he runs a Mortgage company and claims to be an expert witness in mortgage fraud cases. Really? No, really? In fact he is that not a mortgage fraud witness but more a compensated whistle blower.  If you note this is in 2007 before whistleblowers were relegated to their own prosecutions or broom closets in which to finish their sentence. (I have written about those before here) And for the record the NJ Federal Prosecutors handling the other housewives fraud case have never heard of this man.  Well there you go!

I love Attorney's just as much as I love Doctors, the evil necessity and that is only when you have exhausted all other options including leeches which can function as both frankly.

And reading the below article you can see that even his ethics were prediposed to a check and that was the primary reason for his coming forward.  And now we get this asshole in our homes on a weekly basis.

Well it could be this asshole, whoops I mean attorney.  Or this one who at least had the decency to kill himself saving us all the time and money and its double points as it was a Prosecutor!  Well this one did make it to TV first it was just Catch a Predator (another hideous show that served no purpose) Or another Prosecutor and their misconduct which seems widespread.  Or this dude who would come in handy while sitting around a Courtroom.   Or even in Australia this dude who brings the date rape drugs to the yard apparently. Maybe he sold them to these dudes. Or this guy and this story which could be a Bravo series of its own.

ETA: I just found this little bon mot and it is worth a bite (its a pun trust me)

This is just a cursory glance and in that process which took an entire 10 minutes and one cup of coffee I found Police being arrested for drug distribution with her kid in the car and  a Cop who locked his dog in the Police car and it died.  That was just this week.  So please continue to tell me that there are good and bad and I will find three times the bad versus the good.  I always say to people "name 3 time, incidents or people you are telling me about that supports this argument."

I get the trademark scoff, eye roll and disparaging remark that Lawyers are so good at.  Attorney or Hypocrite the new game over German or Lesbian that is so 90s. 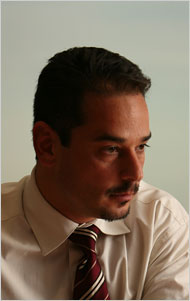 Richard Perry/The New York Times
James Marchese exposed a cancer drug fraud.
But in the same ruling, a federal judge criticized the former sales representative, James Marchese, for not bringing the scheme to light earlier, given that he thought thatcancer patients were being harmed as a result of the fraud.

Mr. Marchese’s case, which was described in an October article in The New York Times, drew attention because prosecutors had rarely argued that a whistle-blower should be denied any portion of the funds recovered from a lawsuit he or she initiated.

To do so, prosecutors must show that a whistle-blower was the planner or initiator of the scheme involved; otherwise he or she is legally entitled to receive 15 to 25 percent of any funds recovered by the government. The precise figure is determined by a whistle-blower’s contribution to the case.

In a ruling after a two-day hearing last month in Seattle, Judge Marsha J. Pechman of Federal District Court found that prosecutors had failed to prove that Mr. Marchese was the initiator of a scheme at his former employer, Cell Therapeutics. In April, the company agreed to pay $10.5 million to settle charges that it had bilked Medicare out of that much money in connection with the sale of a cancer drug, Trisenox.

At the hearing, Mr. Marchese and his lawyers argued that he should receive 25 percent, about $2.6 million. Among other things, Mr. Marchese maintained that the government would never have had a case without him.

In her decision, which was issued last Friday, Judge Pechman awarded him the minimum 15 percent, or $1.6 million. She found that Mr. Marchese had helped prosecutors uncover the scope of the company’s fraud.

In a telephone interview Thursday, Mr. Marchese said he was pleased with the ruling. His lawyers said his 15 percent award was slightly less than the typical one, which is 17 percent.

“I think the court did a phenomenal job of getting around the issues,” Mr. Marchese said.

But the ruling also criticized him for not alerting federal authorities more quickly.
Instead, Mr. Marchese, passed over for a promotion, wrote an angry letter to his superiors, taking credit for the very actions that he thought were causing harm, Judge Pechman noted. It was not until October 2002, after another falling-out with his superiors, that he went to the Food and Drug Administration, she found.

In settling the charges against it, Cell Therapeutics did not admit to any wrongdoing, and continues to dispute the accusations. An assistant United States attorney in Seattle, Peter A. Winn, who handled the case, said that his office was pleased that Judge Pechman had limited the award to 15 percent.
Posted by Unknown at 10:36:00 AM