The new show on Fox where an Ex Sherriff has to pimp out family members in order to make ends meet. 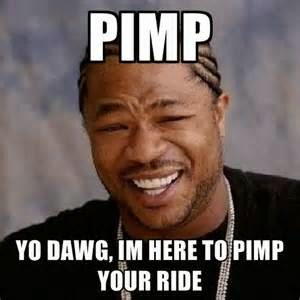 I don't know what I love more about this scumbag, the fact that he was or is a pimp, stole drugs and guns from the Sheriff department, due to an "on the job" injury (which job I am unsure) could not get extra time to do SWAT team raids (cause there are a lot of dudes fighting with their sisters and barricading themselves in their house) or that his gun business (the one with the stolen firearms no doubt paid for by 1033) was faltering or that he had debts to pay to his tattoo artist cause he got a lot of those so in prison he will do great!  Or that he drew his pension of 181K after getting fired and sentenced to jail for his crimes then claimed he was indigent.

Its hard out here for a pimp dawg!  MAN UP!


Broke except for $181K? Prosecutors want ex-deputy back in court

King County prosecutors are asking to have a former King County sheriff’s deputy — who helped his wife work as a prostitute, stole from the department and delivered drugs — brought back to court and be handed a stiffer sentence.

Darrion Keith Holiwell, accused of lying in court
A former King County sheriff’s deputy, who pleaded guilty to helping his wife work as a prostitute, lied in court and should face a stiffer sentence, prosecutors allege in a court filing.
When Darrion Keith Holiwell, 49, was sentenced to 366 days in prison on Aug. 4, his former lawyer told Superior Court Judge Bruce Heller that Holiwell was broke. Heller waived court costs and reduced Holiwell’s fine for second-degree promoting prostitution from the mandatory $3,000 to $1,000 because Holiwell was found to be indigent, prosecutors said.
Holiwell also pleaded guilty to domestic violence, first-degree theft and violating a drug law.
Investigators have since learned that three weeks before he was sentenced, Holiwell had completed and notarized paperwork to cash out his retirement for more than $180,000, according to a motion to vacate judgment filed Monday by King County Senior Deputy Prosecutor Gary Ernsdorff. Prosecutors have since obtained a court order to freeze Holiwell’s bank account.
Prosecutors are now asking a judge to “vacate the judgment and resentence the defendant due to fraud and misrepresentation,” according to the document.
“His behavior is just another component of his continuing scheme to deceive any and all those around him,” Ernsdorff wrote. “The court relied on the defense representation that the defendant had ‘lost everything’ and was indigent. In fact, he was just days away from getting a check for $181,685.83.”
While Heller followed the sentencing recommendation agreed upon by the prosecution and the defense, which was not at the top of the range, the judge said he factored in Holiwell’s losses before making the sentencing decision.
If brought back to court, Holiwell could face the top-of-the-range sentence of 20 months in prison.
The Sheriff’s Office began investigating Holiwell in April, after his estranged wife went to his previous wife to find out if the other woman had endured domestic violence while with Holiwell, authorities said. The former wife mentioned the conversation to a friend who is a sheriff’s employee, and the employee notified supervisors.
Although the current wife and the former wife didn’t intend for an investigation to result, both later provided statements concerning assaults and violent behavior by Holiwell, according to the court charging documents.
Holiwell’s current wife told investigators that Holiwell, knowing her background as an exotic dancer, suggested she work a second job as an escort to help with the family’s financial problems, which worsened when he needed surgery and couldn’t earn overtime related to his SWAT duties or through Praetor Defense, his firearms-training business, authorities said.
Even though Holiwell’s estranged wife moved to her own condominium when their 14-year marriage faltered last year, he helped her work as an escort by providing advice and assisting with security measures, she told investigators. Holiwell would collect about 80 percent of her earnings — including some of the nearly $2,000 she made on weekends — to help him pay household expenses and for expenses related to their two young sons, she said.
Holiwell’s theft conviction stems from his trading of 67 cases of ammunition worth more than $15,000 to two gun shops in exchange for credit to obtain tactical gear and firearms parts.
Holiwell’s drug conviction stems from his possession and sales of drugs, including steroids.
King County Sheriff John Urquhart fired Holiwell on July 15.
During his sentencing, Holiwell said he had “embarrassed myself, my family and this department” by his actions.
“Upon completion of my sentence I intend to rejoin the community as a law-abiding citizen. I hope to repair and rebuild the relationships with my family, friends and community that I damaged by my actions,” Holiwell said.
“He’s at Ground Zero,” Holiwell’s attorney, Kristine Costello, said during the sentencing hearing. She said he took full responsibility for his crimes because he wanted to “man up.”
Costello resigned as Holiwell’s attorney after the sentencing.