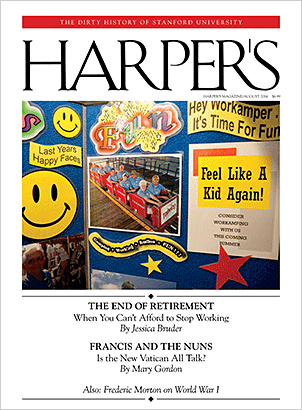 Not in the conventional kind where you are partners in a romantic relationship but one of true support and trust.  Good luck with that!

But I read the article below and I have been a big proponent of the multi generational, new family dynamic for the last few years now. This came after reading a distressing but interesting article in Harper's Magazine this month, called The End of Retirement, When you Can't Afford to Stop Working, by Jessica Bruder.

This article was about the elderly nomads who live in RV's and Mobile housing who are migrant workers.  They call themselves the "Workamper"   Many of them were once stable home owners and employed and through  bad investments, job losses due to aging and/or  the recession they have found themselves the new migrants who move from location to location seasonally in seek of work.

Their largest source of employment comes from Amazon via their clever use of second party agencies who hire these reliable but aged population to work their warehouses located throughout the country. Much has been made about the working conditions and the lack of security among other issues and to these people they are grateful. And given the Amazon ethic that everyone is replaceable and you better work or find your way out the door needs to read this piece.

And for many you will read  this and think as  I thought "there by the grace of God.."   as they are treated no differently than the immigrant migrant worker is and you wonder if there will ever be a leader to emerge from this miasma of sheer pain to make the quality of life better for everyone regardless of age, race or education. Get this Harper's issue and read stories of people who truly fit the supposed Horatio Alger ethic and what resulted.

So we do need to rethink aging and what retirement defines. This was another article that discusses the issue of living well in retirement and living independently with the aid of family.

But for those like many of the women below finding an alternative is essential.  I do believe that this concept of communal housing and co-operative living will find a true legitimate base and need as we begin to age and find ourselves still independent but in need of a new interdependence.  You need to find a community in which to live in every sense of the word.

This is just another example of how you can make it work with the right effort and you can find yourself in a family of your own choosing with new rules and dynamics that provide a sense of security in every sense of that word as well.


Looking for a Housemate, Not a Mate, in Later Life

WHEN Marianne Kilkenny was in her mid-50s, she decided she’d had enough of living and working in Silicon Valley but was not sure what to do next.

She found the answer while reading Joan Medlicott’s novel “The Ladies of Covington Send Their Love” during a visit to Asheville, N.C.

Ms. Kilkenny, now 64, moved to Asheville a year later with a plan to create communities like the fictional one that had captured her attention: three women in their 60s living together in a farmhouse in North Carolina. Today, not only has she succeeded in living that very life, she is also determined to help other women (and men) arrange shared housing as they grow older, while avoiding some of the potential downsides of such a move.

To that end, she founded an organization called Women for Living in Community, which offers advice, sometimes for a modest fee, to people interested in shared living arrangements.

“We weren’t intended to drive into the garage and turn on the TV,” said Ms. Kilkenny, who is divorced and has no children. Instead, she believes “aging in community” is a viable alternative to growing older alone or in a more traditional situation, like marriage.

A still small but growing number of women approaching the common retirement age of 65 or 66 appear to agree.

According to the Census Bureau’s 2012 American Community Survey, among “nonfamily households,” the percentage of women 65 and older who choose not to live alone has grown to 3.8 percent, up from 2.96 percent in 2005, the first year numbers were included in the report. For men 65 and older, the percentage during the same period remained the same at 9.1 percent.

While men typically remarry at higher rates than women, women are increasingly looking for alternatives to living alone, said Rachel Caraviello, a gerontologist and vice president for programs and services at Affordable Living for the Aging in Los Angeles.

With housing costs typically a third or more of living expenses for people 55 and older, the desire to share living space is often driven by economics.

“There’s a real uptick in people who need rental income,” said Kirby Dunn, executive director of HomeShare Vermont, which has been in the business of helping people find housemates for 30 years. “With the recession, people were looking at home-sharing as a way to financially help themselves during difficult times.”

But equally compelling, and the reason for Ms. Kilkenny’s life choice, can be the desire for companionship or the sense of security derived from having a housemate — especially these days, when family members are often far apart.

“Over the past several decades we’ve seen kind of a shift in the way people live,” said Billie Campbell, senior program manager of the Thomas Jefferson Planning District Commission in Charlottesville, Va., which supports aging in place and is working on a home-sharing program.

“Multigenerations used to live together,” she said. “Houses have gotten bigger but households have gotten smaller.” For people who want to stay in their homes, taking in a tenant — a housemate — can be an option.

Another determining factor can be the increasing desire of older people to remain in the community where they live, rather than moving to a place that might be more affordable.

According to an AARP Public Policy Institute Report released in April, “What is Livable? Community Preferences of Older Adults,” among those ages 50 to 64, 71 percent want to continue to live in the community where they reside. By age 65 and older, the percentage jumps to 87 percent,

But whether they consider themselves housemates or roommates, and whether one person owns the house, the residents co-own it or all are renters, sharing space requires research and time to find the right combination of people.

Chris Lambrecht, 66, moved in with a female friend, 59, when the owner of the condominium he was renting defaulted on his mortgage and it was bought by an investment company. He paid $600 a month and half of the utilities, Internet and TV for a total of $850. Both were divorced; he twice, she once. They shared a couple of meals a week, and rented a three-bedroom house with a month-to-month agreement and no lease from July 2013 until February 2014.

“We got along until I got a girlfriend,” said Mr. Lambrecht, who lives in the Atlanta area.

Since leaving the roommate situation, he has been renting a three-bedroom, one-story farmhouse on three acres from friends for $1,200. His son stayed with him for a month but Mr. Lambrecht plans to continue looking for a “homemate.” He expects it will take from three to as long as six months to find the right person, preferably a male baby boomer, he said. “It’s a three-hour process with two meetings. You want to get to know a person.”

Ms. Kilkenny, who is author of “Your Quest for Home,” a book she published through CreateSpace, advises knowing yourself as a way to find compatible housemates. “You have to do your internal work,” she said. “Identify what you want first.”

From a safety and security standpoint, background checks and references are essential. Beyond that, it comes down to how well you can get along in shared space.

“Not everyone can live together well,” agreed Ms. Dunn at HomeShare Vermont. “It does require a certain amount of flexibility on both people’s part. It’s a little bit of a dance that you have to do.”

Organizations such as the National Shared Housing Resource Center, which lists agencies throughout the country, can help people find others with whom to share space

“There are issues that can come up in shared housing,” Ms. Kilkenny said. A chief one is the ability to continue to pay. As a former human resource professional, she relies on her interviewing skills to evaluate potential candidates for a shared living arrangement. She might, for example, ask someone who has revealed plans to help an adult child with a down payment on a house, “How might that affect your ability to pay rent?”

She also does what she calls “behavioral interviewing” to reveal potential hidden attitudes or situations that would mean someone is not the right candidate to be a housemate. Some organized home-share programs encourage a trial period of two weeks or longer to determine whether a match is suitable.

&
Other things to consider are the kind of agreements made for payment, the length of the arrangement and plans for its termination when it’s not working.

For example, where Ms. Kilkenny lives there is a one-year lease with the landlord of the house, with 60 days’ notice required for moving out and a written agreement among the housemates. “You need to have an exit strategy,” she said. “If this isn’t working, what do we need to do so there are no hard feelings afterward?”

In the 1980s house she has lived in for three years, Ms. Kilkenny occupies the mother-in-law suite with a separate kitchen and pays $900 a month, while two housemates pay $700 each. One lives in a room called the Abode, and the other lives in the original master bedroom, known as the Treehouse. A third housemate, who lives in a furnished room known as the Cocoon, pays $500.

Ms. Kilkenny, who had a mortgage for many years, enjoys the freedom of not having to maintain the property and having no mortgage debt.

“We became fairly independent,” she said of herself and many of her contemporaries. “Then, at the end of the day, you’re sitting in front of the TV eating your little ol’ dinner and you realize you would like to have someone say, ‘How was your day?’ I am no longer fiercely independent. I now can be interdependent and this is by choice.”
Posted by Unknown at 5:25:00 PM