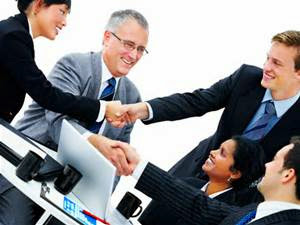 And Fe Fi Fo Fum I smell the blood of a sucker man. That pretty much sums up the financial services industry. We pay them enormous fees, they pay enormous fines for wrongdoings and they end up still the primary fiduciary caretakers for most of Americans.

A fiduciary is a legal or ethical relationship of trust between two or more parties. Typically, a fiduciary prudently takes care of money for another person or for groups of investors who entrust funds to the fiduciary for safekeeping or investment.

On paper that sounds great but that is on paper but much like the medical industry in sway of the Big Pharmaceuticals or the device industry, those caretakers or fiduciaries have to invest in something. And to do do they must invest funds via the ubiquitous con-artist aka salesperson selling them bullshit wrapped in an enigma of legalese that is a financial packgage. These packages are ultimately about the holders of money and the package makers and not those who actually gave and earned that money from which they hold. Customer last should be their motto as that is the least of their concerns.

So when I read today the article below it goes to show that even the most diligent and trustworthy of those in the industry are being conned/robbed/boonswaggled/find a word that fits and use it despite their best efforts to do so.

I have always believed that good people do exist in the industry, I actually again know of one such firm but I know of one. Like the mysterious Lawyer than I know of I know one. I don't know any medical professionals yet but well I must hope just in case but hey then I can say, I know of one.

What is distressing is that despite all the laws, the supposed dreaded regulation there is nothing that truly has stopped this train from its continual roll down the tracks to inevitable crash once again. The joke is that NONE of these laws/regulations are new. They are over 30 years old but like anything old it might need an update, remodel if you may say. And that we cannot have, we cannot enforce it as it was so we ignore it or we write more new laws which are in turn discriminatorily enforced or ignored as determined by checks business writes to ensure that said practice remains.

I have never seen anything like this supposed administration concern of the average citizen be utterly corrupted and in turn ignored since well the last one. This is the hope and change that we we promised. We hoped it would change and it did not. The end.

Sometimes the best Presidents are former ones. I adore Jimmy Carter.

David O’Brien, a certified financial planner, has tried to repair the retirement portfolios of several victims over the years. There was the high school science teacher who didn’t realize she had been sold a variable annuity, where layers of incomprehensible fees devoured nearly 2.5 percent of her retirement savings each year. Then there was the woman fighting cancer, who was also sold a high-cost annuity, but whose underlying investments were tied up in a money-market type fund — one that cost 1.5 percent annually.

In many cases, he explained, brokers made their sales pitches where these people worked, which put them at ease. “They send their local representatives to meet with you and they make it seem like this normal thing — you fill out the forms because you are retiring,” said Mr. O’Brien, who works in Midlothian, Va. “And then a few years later, you meet with me and you don’t even realize you were sold two variable annuities inside an I.R.A.”

Brokers are not necessarily required to act in their customers’ best interest, even if they are advising on their retirement money. While that would seem to be a basic consumer protection, in Washington and on Wall Street it has proved to be wildly contentious.

Amid fierce pushback from the financial services industry, the Labor Department, which oversees retirement plans, recently delayed releasing a revised proposal that would require a broader group of professionals to put their clients’ interest ahead of their own when dealing with their retirement accounts. The department said it would release the proposed rule in January, according to its regulatory agenda, instead of this August. (Phyllis C. Borzi of the Labor Department, had signaled that it could miss the deadline.)

“They have really been stymied by the financial industry, which is spending millions of dollars to fight this rule,” said Karen Friedman, executive vice president and policy director at the Pension Rights Center, a nonprofit consumer group. “All the Labor Department is trying to do is modernize a rule that is out of date.”

The agency is trying to amend a 1975 rule, part of the Employee Retirement Income Security Act, known as Erisa, which outlines when investment advisers become fiduciaries — the eye-glazing legal term describing brokers who must put their customers’ interests first. The rules are stricter for fiduciaries who handle consumers’ tax-advantaged retirement money compared to fiduciaries under federal securities law.

But it is easy to avoid becoming a fiduciary under Erisa, consumer advocates say, because brokers must first meet a five-part test before they are required to follow the higher standard: If the advice is provided on a one-time basis, for instance, the rule does not apply. On top of that, the consumer and the broker must also “mutually agree” that the advice was the main reason for the investment decision.
While a five-month delay may seem inconsequential, it has been nearly four years since the proposed rule was originally introduced in 2010. It was rescinded the following year after criticism from the financial services industry and lawmakers. At the time, Ms. Borzi, who oversees retirement plans at the Labor Department, said that the agency wanted to take the time to get the rule right.

“There is a point at which delay equates to surrender,” said Mercer E. Bullard, an associate professor at the University of Mississippi School of Law and investor advocate. “There is a real concern.”

Opponents — including the Securities Industry and Financial Markets Association, known as Sifma, which represents large Wall Street firms, and the Financial Services Institute, which includes smaller independent advisers — contend that new rules could disrupt the way they get paid, and therefore make it difficult for them to serve smaller investors. But consumer advocates argue that those predictions are premature since nobody has yet seen the revised rules.

More specifically, the Wall Street firms and brokers say they are concerned the new regulations will prohibit them from charging commissions, even though Ms. Borzi has said commissions will be permitted.
“We think they won’t adequately allow for commission-based accounts and therefore investors will be hurt,” said Ira Hammerman, general counsel for Sifma. “It’s like, ‘Just trust me. We will work it out.' ”

Fiduciaries under Erisa, as it’s written now, cannot be paid in ways that would pose a conflict of interest. But the way brokers and insurance agents are compensated often contains potential conflicts: a broker might receive a higher commission for recommending one investment over another. And arrangements known as revenue sharing, where mutual fund companies share a portion of their revenue with the brokerage firm selling the fund, also provide opportunities for conflicts. Fund companies that pay more, experts said, might get a spot on the firm’s list of recommended funds.

“The real problem with revenue sharing is that it is an undisclosed, under-the-table payment from the broker to the adviser,” said Professor Bullard, though he noted that not all arrangements were conflict-ridden.

The Labor Department did not return repeated calls seeking comment. But in an interview last November, Ms. Borzi said the agency would take a close look at these types of payments and others that might provide financial incentives to push certain products. She also said it was not the agency’s intent to put people out of business and that the public would have time to comment on the rules before they were issued. “Our intent is to protect consumers from conflicted investment advice,” she said.

In March, Ms. Borzi confronted many of the arguments from critics of the rule at an event hosted by the Financial Services Roundtable, an industry trade group. “Here is what I don’t understand,” she said at the meeting, which is on YouTube. Why are people “so opposed to our even putting a proposal — a first crack at a discussion proposal — on the table?”

There have also been repeated delays and strong pushbacks to broaden the fiduciary rule that covers all retail accounts, not just retirement accounts. Dodd-Frank, the financial regulatory law that went into effect in 2010, gave the Securities and Exchange Commission the authority to propose a rule that would require brokers to act as fiduciaries — but it did not require that the agency write any rules. (Brokers are currently required only to recommend “suitable investments,” while professionals known as investment advisers must act in their customers’ best interest).

Four years later, the S.E.C. still has not said whether it will even propose a rule. In fact, Daniel M. Gallagher, a Republican commissioner at the S.E.C., said in March that he was not sure a majority of the commission believed a stronger rule was necessary. “It is still very much an open issue,” he said at the event held by the Financial Services Roundtable.

As Ms. Roper concluded, fiduciary duty won’t necessarily stop “bad people from doing bad things. But it may provide something of a deterrent and it may increase the likelihood that investors will be able to recover damages.”
Posted by Unknown at 1:41:00 PM