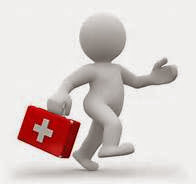 The greatest excuse, explanation or justification for the Affordable Care Act was the use of ER's as primary care providers for those uninsured who used them as drop in day or night clinics and in turn causing the increasing rise in hospital costs.

And that was actually not true but facts as logic are as missing in most arguments and discussions these days as logic and facts were non existent in the film Gravity, but hey I liked it visually.

The belief is that now the great unwashed are now card carrying insured people they will flood the ER's with demands and needs that of course they will be ill prepared to meet.  Now the idea that most if not many of the carriers are limiting by intent the options and choices of hospitals and Physicians will be method or reason for this madness is of course not the issue.   The article from today's NYT here discusses this issue and specifically notes this:

Hospitals said they were getting ready for an influx of newly insured patients, but many health care providers said the pace was slower than usual because of the New Year’s holiday. In a typical report, Clay Holtzman, a spokesman for Swedish Medical Center in Seattle, said the system’s hospitals were not seeing an immediate surge.

“We might at some point down the road, since we have spent a lot of time informing uninsured patients of their options under the exchange and expanded Medicaid,” Mr. Holtzman said in an email. “But it depends on if those patients chose plans that include us.”

Swedish is one of the largest hospital systems in the region, but Mr. Holtzman said it had been excluded from the networks of providers used by the two largest health plans on the state’s insurance exchange.

Some people using their new insurance discovered that they could be responsible for substantial co-payments and other out-of-pocket costs.

As I have yet signed up for any provider I discovered that only one would allow me to use the facilities of Swedish so I am pending my enrollment until I can secure that policy.  In anticipation Swedish also opened a walk in urgent care clinic in my area to provide care for those not insured so thankfully if anything does happen in the next month I can get care.  Anything to avoid the animals of Harborview Medical Center/UW Hospitals that are the singular provider for the 5 policies offered on the exchange.

Whatever results from the Obamageddon, we are in this fiasco for the long haul.  I need oral surgery and I still plan on going to Mexico for the heavy lifting. As Dental and Vision are still not a part of the plan, so why not take my health, my needs and my money out of the country.  I wonder if I could drop there on a drone?  Maybe Amazon can hook me up.

Supporters of President Obama’s health care law had predicted that expanding insurance coverage for the poor would reduce costly emergency room visits as people sought care from primary care doctors. But a rigorous new study conducted in Oregon has flipped that assumption on its head, finding that the newly insured actually went to the emergency room more often.

The study, published in the journal Science, compared thousands of low-income people in the Portland area who were randomly selected in a 2008 lottery to get Medicaid coverage with people who entered the lottery but remained uninsured. Those who gained coverage made 40 percent more visits to the emergency room than their uninsured counterparts. The pattern was so strong that it held true across most demographic groups, times of day, and types of visits, including for conditions that were treatable in primary care settings.

The finding casts doubt on the hope that expanded insurance coverage will help rein in rising emergency room costs just as more than two million people are gaining coverage under the Affordable Care Act.

Instead, the study suggests that the surge in the numbers of insured people may put even greater pressure on emergency rooms and increase costs. Nearly 30 million uninsured Americans could gain coverage under the law, about half of them through Medicaid. The first policies took effect on Wednesday.

“I suspect that the finding will be surprising to many in the policy debate,” said Katherine Baicker, an economist at Harvard University’s School of Public Health and one of the authors of the study.

But Dr. Baicker and other economists who worked on the study said the increased use of emergency rooms is driven by a basic economic principle: When things or services get cheaper, people buy and use more of them. Previous studies have found that uninsured people face substantial out of pocket costs that can put them in debt when they go to the emergency room, and that Medicaid reduces those costs.

Medicaid coverage also reduces the costs of going to a primary care doctor, and a previous analysis of data from the Oregon experiment found that such doctor visits also increased substantially. Researchers concluded that gaining health coverage led to an across-the-board rise in the use of health care.

“This is just one piece of an increase we found across every type of care,” said Bill J. Wright, an author of the new study who is the associate director of the Center for Outcomes Research and Education in Portland, a part of Providence Health and Services, a large health care provider.

Some experts cautioned that the pattern identified in the new study could shift over time. They noted that the study only measured the first 18 months after people gained coverage, and that old habits of relying on the emergency room are often hard to shake. It also takes time to find a primary care doctor and make an appointment.

“How to use a plan and when to seek emergency department care involves a learning curve that doesn’t happen overnight,” said Sara Rosenbaum, a health researcher at George Washington University who was not involved in the study.

Amitabh Chandra, a professor and director of health policy research at the Harvard Kennedy School of Government, also said people may often be using the emergency room because they need its services. Medicine has become much more complex since the days when people relied mainly on a family doctor, with teams of specialists now using highly sophisticated equipment to diagnose and treat illness, and it is possible that higher rates of emergency room use could be related to that, he said.

“We often say, ‘if this person had just received preventative care at a doctor’s office, we would not have seen emergency room use,” said Dr. Chandra, who was not involved in the study. “But there is only so much that prevention can do.”

Professor Rosenbaum pointed out that a lot of the recent growth in emergency department use has been among privately insured people, not just among the poor.

The study drew on data from the Oregon Health Insurance Experiment that included about 75,000 low-income Oregonians and randomly assigned about half of them to Medicaid coverage.

The experiment has sparked considerable interest among health experts, who say that its design – random assignment of coverage through a lottery – allows them to isolate the effects of the program and draw scientifically rigorous conclusions that are not muddied by other factors. Such designs are the gold standard in medical research, but are rarely used for health care policy.

Dr. Chandra, who helped conduct an analysis of emergency department use in Massachusetts after that state’s health insurance reform in 2006, called the Oregon study “breathtaking” because of the strength of its finding and the fact that there was a control group to measure against. In contrast, the data from Massachusetts on the association between the insurance expansion and emergency department use was “all over the place,” he said, which made drawing conclusions difficult.

“You would conclude what you wanted to conclude depending on which side of political aisle you were on,” he said. He added: “Now we have an answer.”
Posted by Unknown at 9:11:00 PM